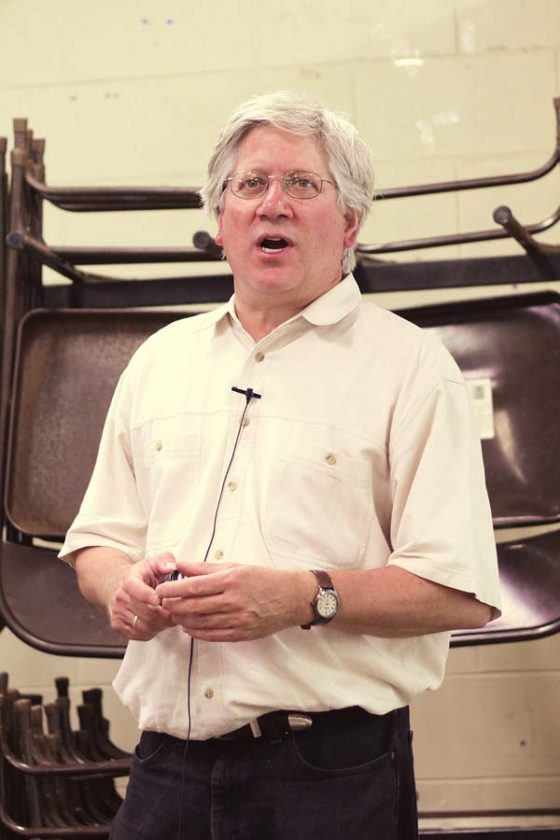 A pesticide-free pilot program will launch in four Maui parks over the coming year in the county’s quest to find greener measures that won’t break the bank.

War Memorial Little League Field in Wailuku, the Luana Gardens playing fields in Kahului, Makana Park in Kuau and the South Maui Community Park in Kihei have been selected for the yearlong test.

But the change is not just about switching sprays — it’s about creating a strong soil system that naturally produces healthy grass, said Jay Feldman, executive director of Beyond Pesticides, the Washington, D.C., nonprofit that’s helping the county roll out the program.

“How can we replace this herbicide with something that’s organic? . . . That is the wrong question,” Feldman said during a meeting Wednesday at the Waikapu Community Center. “We’re not asking for a product swap. We’re asking, ‘What system do we need to put in place to ensure we can wean ourselves off of the chemicals that we’ve become dependent on?'”

On Wednesday, Feldman and Chip Osborne, president of Osborne Organics, went through training with county Parks and Recreation Department staff, discussing lawn care that relies less on outside products and aims to feed the soil, not just the plant. Healthy soil makes more nitrogen, a primary nutrient for grass. 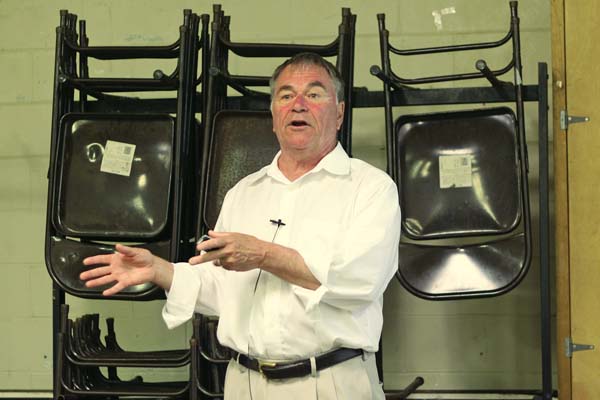 “Typically we’ve been taught to focus on the plant,” Osborne said. “When you look at your plant material, focus on what you can see, but also on what you can’t see, which is the soil. Really, it is the microbial life in the soil that makes the difference.”

That’s why the pilot program is starting, literally, from the ground up. Soil tests have already been conducted at each site, Feldman said. Next, Beyond Pesticides and Osborne Organics will work on a report and provide the county with “a timetable of practices” for improving the soil.

“What we found in the parks is that the potential in those soils was pretty good,” Osborne said. “There was a lot of fungal life and a lot of bacterial life, but it wasn’t active. All the years of pesticides and salt-based fertilizers had diminished it. So the first thing that’s going to happen — far more important than a bag of fertilizer — is to restore that biological level.”

Frequent sports activities at the selected Maui sites can also affect soil health. Compacted soil has less room for air, which means less of the good microbes that generate healthy grasses, Osborne said. So, not only will the microbes need to be reactivated, but the soil needs to be “aerated,” loosened to allow for more oxygen. The county has already started doing that, and under the pilot program may need to do more, Feldman said. 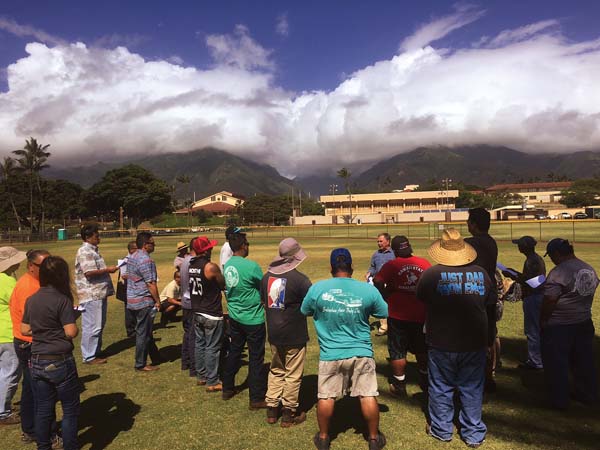 The pilot program has been a couple of years in the making, said County Council Member Elle Cochran, chairwoman of the council’s Infrastructure and Environmental Management Committee.

“It’s crazy that we’re finally here. It’s materializing,” said Cochran, who holds the West Maui residency seat. “Just to manage our parks and our landscaping and maintenance in a healthier, more productive way has been kind of the thought. This is the organization that helps people do just that.”

All four sites have Bermuda grass but present some variety for the yearlong trial run.

Each pilot park will get an action plan.

“We are eager to start this process to see the potential of implementing the soil system and field turf using the recommended pesticide-free alternatives,” Savage said.

Beyond Pesticides is underwriting the program, Feldman said. Total costs will depend on the expectations for the fields, including the department’s level of tolerance for weeds. Beyond Pesticides tries to work within the budget of different institutions, Feldman said. Money being spent on chemicals can be redirected to soil improvement, for example, and the county is already doing things such as mowing, watering and aeration that will fit well into the pilot program.

“People always ask us, ‘Isn’t this more expensive?'” Feldman said. “But over the long term . . . we’re saving money because we’re not pouring these outside inputs into the system. . . . We’re generating a lot of those nutrients naturally in the environment.”

The county has tested environmentally friendly methods with mixed results. Within the last four years, the Parks and Recreation Department debuted an aeration program that reduces the amount of herbicide and fertilizer used. While labor costs went up, chemical costs went down, though the department would have to do more analysis to determine whether the program was truly cost effective, Savage said.

Other trials have proved less successful.

“Public Works did experiment with several different types of organic herbicides, which were quite expensive, and none of which worked with any effectiveness, given the types of sturdy weeds and grasses that grow on the road shoulders,” department Director David Goode said.

A different type of program would have to be designed for the county’s roadways.

“The pilot work being conducted with parks does not translate to highways’ needs, although Public Works staff attended to learn about the program and to see if they could learn anything new to help the current situation,” Goode said.

In recent years, the state Department of Transportation also has tried to cut down its use of the popular weed-killing product Roundup, due to complicated permitting and community pushback, maintenance superintendent Steve Rodgers said during a March 2016 meeting with Cochran’s committee. Using the organic weed killer Avenger and spraying less, the department dropped average herbicide costs from $31,000 a year to $21,000.

For residents who want to go pesticide-free, the first step is to decide what they want out of their lawns, Osborne said. That determines what they need and how much work they’ll have to do.

At first, homeowners may need to start with organic fertilizers. Near the peak of growing season for warm-season grasses (around March through May), Osborne said homeowners can apply one bag per 3,000 square feet, then another bag six to eight weeks later, followed by a bag at the beginning of August and one at the beginning of September, when the season’s peak winds down.

“We’re using a little bit of product all at low rates, and that over time is going to build the microbial community,” Osborne said. “Once we get that microbial community all synced up and working, that’s when we begin to reduce the fertilizers and all the rest of that.”

Homeowners also can water their lawns or plants using a molasses solution (3 to 4 ounces per 7 to 8 gallons of water) or humic acid, which is the end product of decomposing organic waste and can be purchased by the bottle. Both promote microbial growth in the soil and generate quick results.

But Osborne said that if he had to choose “one and only one thing,” he’d stick with composting: 22 cubic yards to an acre (0.5 cubic yards per 1,000 square feet), applied anytime grass is actively growing, about twice year.

One community Osborne worked on recently lost funding but is able to survive without fertilizer because its soil had been treated organically for so long. He estimated it takes two to three years to get to that point, but that “it’s always a good idea to continue with the soil building” after that.

“I think it’s a simplified, common sense thought process on how to manage your lawn,” Cochran said after the meeting. “It’s getting back to nature and letting nature do what it’s there to do.”