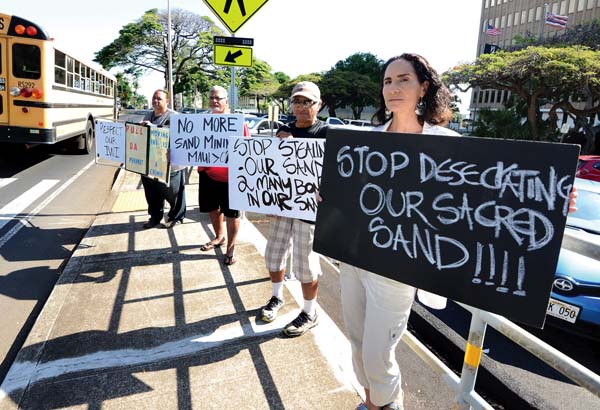 In a protest against sand mining on Maui, Amy Halas (from right) of Iwi Protectors joins Aha Moku o Maui members Charles Aama, Keeaumoku Kapu and Kaniloa Kamaunu in waving signs along High Street in Wailuku on Tuesday morning. Kamaunu said that the sand dunes being leveled are full of the remains and bones of his ancestors. “How do you separate the sand from the remains?” he asked. “For me and my culture, it’s about preserving the burial sites.” Honolulu Construction & Draying had been moving sand from a Maui Lani project to off-site locations, including Oahu. The company had been doing the sand mining as part of grading permits. HC&D has since halted the work after the county said that a special or conditional use permit may be needed.