Puunene Mill may be auctioned off in pieces 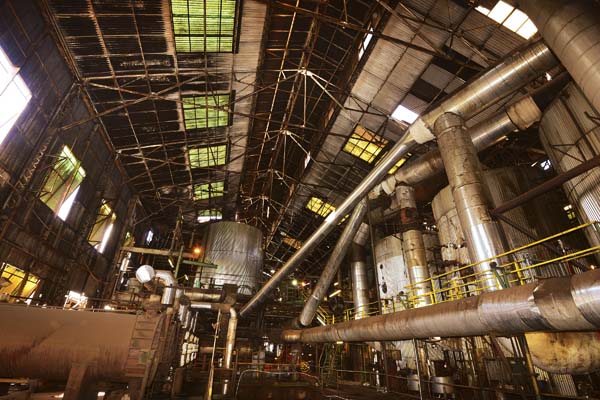 Equipment in the boiling house could be auctioned off in June if no buyer is found for the old Hawaiian Commercial & Sugar Co. Puunene Mill. This photo was taken in November before the mill shut down the next month. The Maui News / MATTHEW THAYER photo

Alexander & Baldwin, the parent company of Hawaiian Commercial & Sugar Co. that shut down in December, continues to negotiate with prospective buyers of the Puunene Mill.

If no buyer is found for the entire mill, the company will proceed with selling pieces of the mill and its equipment at a three-day online auction beginning June 20, said A&B spokesman Darren Pai and auction officials on Tuesday.

“We are pursing two different tracks for disposing of the mill – negotiating with parties interested in purchasing the entire mill, as well as planning for an auction of the equipment,” Pai said in an email. “Those negotiations may continue up until the time of the auction. If we don’t sell the mill in its entirety, it will be sold in individual parts at the auction.”

California-based CA Global Partners and Perry Videx have scheduled the online auction for June 20 to 22. Up for sale will be turbogenerators, boilers, cane milling equipment, compressors, pumps, motors, transformers and portions of the mill boiling house, according to an auction announcement.

Mark Weitz of Global Partners said Tuesday that his company expects to attract customers from the sugar manufacturing industry and other industrial, commercial, processing and manufacturing sector companies in the June auction. He also expects buyers from around the world, including Asia, Europe, South America and the Mainland.

The auction will include 1,200 lots/items with inspection set for June 19 at the mill. The lots/items for sale consist of a “complete 7,200-tons per day, cane processing plant from raw, white and turbinado sugar with 36.5 MW cogeneration plant,” the advertisement said.

Weitz said that it has taken his company several months to prepare and catalog the assets to be sold.

In January, Gregg Epstein of Perry Videx LLC, a company with expertise in sugar equipment, said that if the mill could not be sold whole, large sections of the mill could be sold piecemeal. The iconic Puunene Mill smokestacks, however, would more than likely not be sold.

A&B is still evaluating future uses of the land and the smokestacks once the mill is sold off, Pai said.

The 145-year-old HC&S shut down operations in December with A&B citing losses of $30 million in 2015 and projections of further red ink. The company’s 675-member workforce has been whittled down to a handful of workers who now are employed by A&B, which is turning to diversified agriculture for its 36,000 acres of former sugar cane fields.

For more information on the auction, see gaauction.com/events/hcs-3-day-online-sale/.