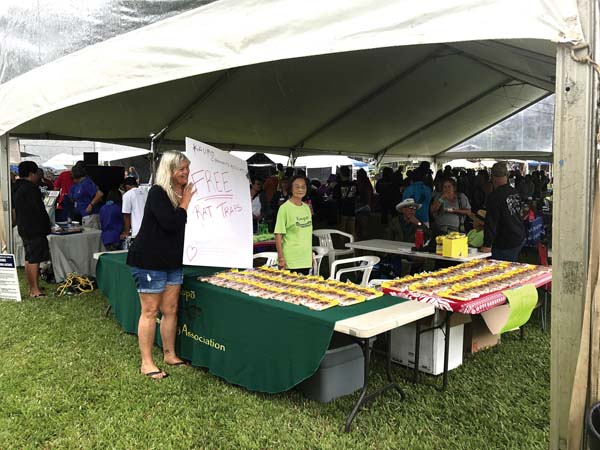 The Kaupo Community Association, with support of the Jonathan Starr Foundation, Hawaiian Airlines and state Sen. J. Kalani English, gave away 680 Victor M210 rattraps at the East Maui Taro Festival at the Hana Ball Park on Saturday. Rats are a vector in the spread of rat lungworm disease with confirmed cases in the East Maui community. The Starr Foundation purchased the rattraps, Hawaiian Airlines provided air shipping from Oahu and English helped collect them on Oahu and bring them to Hana. Manning the rattrap table Saturday was Rose Soon, a board member of the Kaupo Community Association. Her father owned Nick’s Store, which would later become Kaupo Store. Starr said the traps were all gone in two hours with a limit of four per person. Also shown is Janet Six, Hana resident and current chairwoman of Maui Cultural Resources Commission.