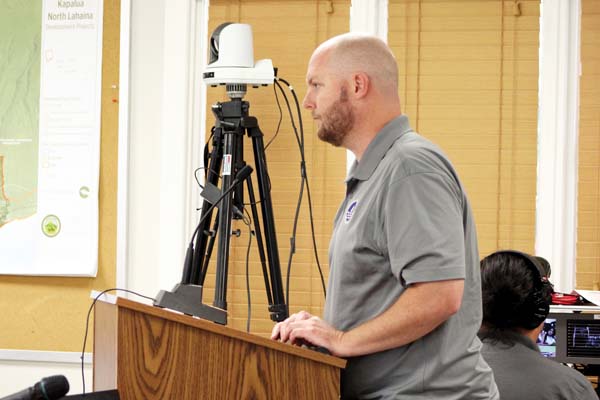 WAILUKU — A $12 million expansion of the state’s harbormaster building and various improvements around the Lahaina Harbor received unanimous approval Tuesday from the Maui Planning Commission.

The state Department of Land and Natural Resources had requested a shoreline setback variance to demolish and reconstruct its administration building at the harbor, repair the seawall fronting the Coast Guard lighthouse and make improvements to Wharf Street.

Commission members supported the plan, saying it was much needed given the amount of activity in the harbor.

“Like most of us, I think this project is overdue,” commissioner Keaka Robinson said. “Sometimes you need to grow in order to make things better for everybody there.”

According to Maui County, “a variance is required for all proposed structures, facilities, construction or any such activities which are prohibited within the shoreline setback area.” Variances can be granted for projects related to uses including agriculture; landscaping; drainage; boating, maritime or water sports recreational facilities; and facilities for public agencies.

Located at the northern end of the harbor, the current harbormaster building doesn’t have enough space for Division of Boating and Ocean Recreation staff, the department said in its application. To make room for the larger building, a number of pier structures used for equipment storage would be removed. The new building also would have a crow’s nest for staff to “have sight distance to the harbor entrance as boats come in and out,” said Colleen Suyama, senior associate with planning consultant Munekiyo Hiraga.

The department also wants to repair the seawall in front of the historic lighthouse.

“The repairs are all going to be landward of the shoreline setback,” Suyama said. “What they’re proposing to do is drill these holes behind the seawall and then pump concrete into the seawall to fill up the voids that are existing and to strengthen the seawall itself.”

In order to keep concrete from spilling into the ocean, acting engineering branch head Finn McCall said that “the ocean side of the seawall will be sealed with geotextile fabric held in place with plywood that will be supported by 4×4 lumber.”

A portion of Wharf Street also will be repaved with concrete — with plans to eventually resurface the whole street — which commissioner Christian Tackett said sounded like a more environmentally friendly alternative to blacktop.

Theo Morrison, executive director of the nonprofit Lahaina Restoration Foundation, spoke in support of a larger office and reinforcing of the seawall, which complements the foundation’s plans to restore the top of the lighthouse.

“We work very closely with the DLNR staff in the very very small, very very crowded current office,” Morrison. “So we’re very supportive of this whole project. . . . We’ve had a lot of community meetings on this, so there’s unanimous support to expand the office to make it much more functional for the tremendous amount of activity that happens in this harbor.”

The department expects to have its permits by June 2018 and the project completed by October 2019, McCall said. During construction, the department will set up a portable office nearby.

The department also said the proposal is part of a larger project to develop an interisland ferry pier north of the current pier. But because the new one will be located outside of the shoreline setback area, it was not included in the department’s request Tuesday.

The project follows several recent improvements to the harbor front, including the expansion of walkways and the addition of trellises, remodeled planters and new light fixtures. That was completed last fall and was the first of four phases in the Lahaina Harbor Front Improvement Project.