Popular foam plate lunch containers, coffee cups, to be gone by end of 2018 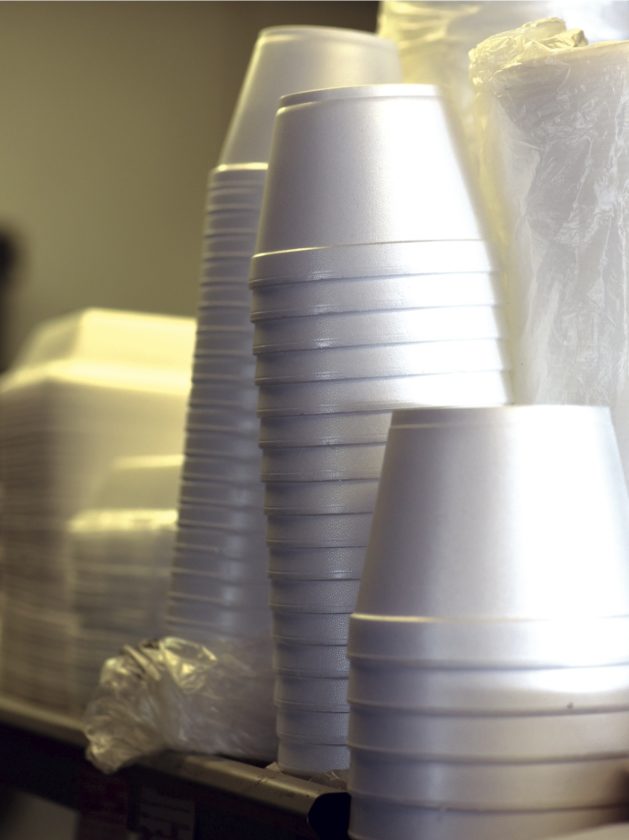 Polystyrene foam containers like these will soon be a thing of the past. The Maui News / MATTHEW THAYER photo

“There was a lot of research that went into crafting this bill, and for many restaurants and food-serving establishments, pricing was an issue,” Arakawa said in a letter to the Maui County Council. “The bottom line is that right now, there is no product out there that is cheaper than polystyrene containers. At least, not yet.”

But Arakawa said that since the law does not go into effect until Dec. 31, 2018, there should be time for manufacturers, distributors and retailers to adjust to the new market.

While he supports the bill, Arakawa pointed out “some concerns” the council could take up before the law goes into effect. They are:

≤ Fines and penalties. Arakawa said the new law says each day a violation occurs incurs a $1,000 fine. The penalty seem excessive, especially for the mom-and-pop stores, he said.

• Unintended consequences. Arakawa said items, such as instant ramen products, which families buy regularly and in large quantities, could be affected because the law bans polystyrene containers no matter where the food is packaged. This could impact lower-income families.

• Enforcement. Arakawa said he saw no provisions for hiring new personnel needed to enforce the law. However, he doesn’t see the law being a large problem for enforcement because it will be complaint driven. Still, the Department of Environmental Management needs to be able to ask for more resources easily if there were a slew of complaints.

Council Member Elle Cochran, a staunch supporter of the bill, said she doesn’t see much or any problems stemming from the ban.

She said she anticipates the polystyrene food container ban would be similar to the plastic bag ban. She said she expected that not much enforcement would be necessary because the county would prepare members of the public in advance of the ban’s implementation.

(In his letter, Arakawa noted that in the first year of the plastic bag ban, there were 14 complaints, four of which required the county to issue warning notices. Then, the number of complaints dropped into the low single digits annually.)

Cochran said that if there are issues with penalties and fines, the council would deal with them.

“But I do not foresee it. There is a long lead time in rolling this out,” she said.

As for unintended consequences with instant ramen noodles, Cochran said she found that the Cup Noodles brand has the polystyrene container. But she said many other brands of instant ramen, including the same manufacturer of Cup Noodles use packaging that is allowable under the bill.

Cochran said the bill aims “to be part of a positive change for our environment.”

Polystyrene never leaves the earth and just breaks down into smaller pieces, she said.

While Cochran acknowledged that the compostable and eco-friendly food service ware also will need to go into the landfill (because there is no specific site for the products to be professionally broken down on Maui), she said that at least those containers will disintegrate in the landfill.

As far as the container prices, with some businesses in favor of the ban saying eco-friendly products could be cheaper than polystyrene containers and those opposed saying otherwise, Cochran said the opposition is not comparing “apples to apples.”

Ban opponents are taking prices from the cheapest polystyrene containers and comparing that with the higher priced eco-friendly products, she said.

But she noted that, in some cases, the compostable containers could be around 4 cents higher than the polystyrene containers. That 4 cents is worth paying to get a compostable product to offset the 65,000 pounds of polystyrene “that never goes away,” she said.

Emily Kunz, co-owner of Choice Health Bar in Lahaina, was thrilled about Arakawa signing the bill. She said that, as a youngster, her father showed her a polystyrene container in a storm gutter when they moved into a home. Seven years later when they were moving away, they went to the same storm gutter and saw that the container was still there.

“It just never goes away; it’s one-time use,” she said.

Serving a health- and eco-conscious clientele, Kunz said she would never think of using polystyrene, but she said she has never had complaints or had any returns with food in eco-friendly containers. This includes the brown, rough-textured containers made out of bagasse.

As for hot foods such as soup, Kunz said her business uses a lined, paper-type container.

Ezra Ka of Millyard Hamburger Steak House said he has yet to find a suitable replacement for the approximately 1,000 polystyrene containers he uses every month at his Wailuku eatery. Ka said there needs to be a balance in law and if a law takes away something, then lawmakers should come up with a replacement.

“I don’t know there is any lower than that,” he said.

Christian Jorgensen, owner and chef of CJ’s Deli & Diner Events & Catering in West Maui, opposed the bill several times in testimony before the council. He said he was disappointed with Arakawa for signing the bill. He said he walked away from a meeting with the mayor with the impression he would not sign the measure.

Jorgensen and his wife, Marilyn, met with Arakawa and showed him invoices and price lists that indicated their costs would increase more than 50 percent.

Christian Jorgensen said: “If it (eco-friendly products) was cheap, we would all buy it.”

He added that such products could be cheaper for some newer food establishments because salespeople selling the eco-friendly products may want to gain new accounts and trim costs for new businesses.

Jorgensen said he would whittle down his supply of polystyrene containers until the law goes into effect. He said he hopes that the prices would come down for eco-friendly products as demand rises with establishments complying with the new law.

While people are comparing the polystyrene food container bill with the plastic bag ban, Jorgensen and his wife said some habits have not changed — people do not bring reusable bags with them and always ask for a paper bag and some even refuse to take their items in a box.

As the Jorgensens have testified before the council on behalf of other restaurant owners who are afraid to speak out, they said they have been singled out by ban supporters. They said people who never visited their restaurant gave them one-star reviews on social media, calling attention to the Jorgensens’ stance on the bill.

Down to Earth Chief Executive Officer Mark Fergusson said his businesses (one location on Maui and four on Oahu) generally use molded paper fiber containers known as “clam shells” for hot and cold items.

At Down to Earth’s Kahului location, customers have an option to use compostable clear-hinge containers, he said.

He added that customers tend to like plastic containers for salads because paper “clam shell” containers break down and get soggy.

Overall, Fergusson said in an email that “Down to Earth continues to make its operations as green as possible.”

He added that depending on the type of container, whether it is clear or paper, for hot or cold food, the cost of compostable or paper options can cost twice or more than polystyrene foam containers.

There are exceptions to the ban. Butchered meats, poultry, fish and eggs may be put in polystyrene containers, though sashimi and poke would not be allowed to be packaged that way. Polystyrene foam coolers and ice chests, foam blocks and packing peanuts used as protective packaging during shipping are exempt from the ban. And the director of the county’s Environmental Management Department may grant exemptions when there are no reasonable alternatives to polystyrene food containers or when complying with the ordinance would create a hardship.

Polystyrene foam containers like these will soon be a thing of the past. The Maui News / MATTHEW THAYER photo