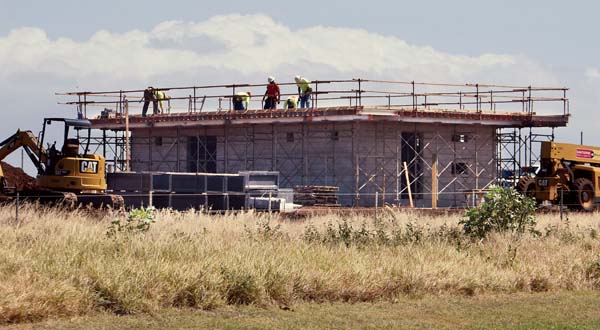 Maui Electric Co. has been given the green light to expand its “Fast Demand Response” program from four to a projected 13 Maui businesses, which would receive bill credits to reduce their energy use with 10 minutes’ notice to stabilize the grid when demand exceeds generation.

The Fast DR program also helps the utility accept more renewable energy, such as rooftop solar and wind power, by helping MECO better match demand and supply, which can be a challenge because of the varying levels of renewable power sent to the grid depending on the weather.

“The Fast DR program is designed to help keep the electric grid stable and prevent unplanned outages when electricity demand — or our island energy use — may exceed the amount of generation capacity that may fluctuate due to as-available renewable resources, such as solar and wind, that we have on our power grid at any given time,” MECO spokeswoman Shayna Decker said Tuesday.

The Public Utilities Commission on July 17 approved MECO’s request to expand its pilot Fast DR program from 0.2 megawatts to 5 MW and for $1.6 million in program cost recovery in 2017 and $384,000 in the next year. The costs will be paid by increases in the commercial and industrial demand-side management surcharge, which would rise 24 cents per kilowatt hour this year and 6 cents per kWh when the additional 4.8 MW have been obtained, the PUC order said.

“The commission commends MECO for exploring DER (distributed energy resources) and nontraditional generation options to address the anticipated reserve capacity shortfall on Maui,” the order said. “Such an approach is consistent with prior commission guidance to ‘utilize new tools, such as energy storage, demand response and other load management techniques, on an equivalent basis to traditional generation assets.’ ”

“We’re pleased to receive the Public Utilities Commission’s approval of our Fast Demand Response pilot program expansion,” said Decker. “Fast DR is a key component of our overall plans to ensure we continue to provide reliable power to the community and help to add more renewable energy to our island’s power grid.”

MECO turned to Fast DR to make up for power reserves lost when Hawaiian Commercial & Sugar Co. shut down operations in December. HC&S had been providing up to 4 MW of firm, scheduled energy and 12 MW of emergency power.

The utility initially proposed installing three temporary diesel-powered generators at its $13 million Kuihelani Substation, which is currently under construction near the Maui Lani development, to make up for the lost HC&S power. However, in March, the utility suspended that request. MECO said that it instead would be looking at expanding its demand-response program and repurposing the utility’s existing battery energy storage system.

The PUC order said that the Fast DR plan was cost-effective compared with other alternatives. MECO also noted in the docket that Fast DR was the most prudent option given the urgency of the needed power reserve due to the loss of HC&S supply.

The commission approved Fast DR programs initially as a pilot program in March 2012 for all of the Hawaiian Electric companies. A consultant hired to evaluate the pilot program in a report filed with the PUC in July 2015 said that there was enough customer interest in a full-scale program and that a 10-minute response time would be sufficient for a Fast DR program, MECO said. Based on this report and the success of its pilot program, MECO considered Fast DR “to be a viable mitigation measure” for the loss of HC&S power, the order said.

Available to a projected 13 commercial or industrial businesses on Maui, Fast DR provides incentives through bill credits to have predetermined electrical equipment, like nonessential lighting, turned off during critical energy situations with 10 minutes’ or less notice, said Decker.

She emphasized that the program is voluntary. Participants receive a bill credit of up to $3,000 a year for every 50 kW of power turned off or reduced within 10 minutes of the reduction call. A minimum of 50 kW of predesignated electric reductions is required to participate in the program. There is a 40-event cap per year, and each event lasts one hour.

MECO controls participating customers’ loads through a Demand Response Automated Server, the order said. Customers would install or upgrade their energy management system and would receive some financial support for installations.

In the order, MECO said it currently is in discussions with “several prospective participants” and is targeting “customers in the hospitality sector.” The County of Maui also has been mentioned by MECO in the past as a candidate for demand-response programs because of its size.

The PUC noted that while the program is promising, “customers on the island of Maui may be at risk in the short-term if the program does not perform as expected.” So, the commission imposed some reporting and planning requirements on MECO.

For more information on MECO’s demand-response programs, go to www.mauielectric.com/demandresponse or email energyscout@hawaiianelectric.com.