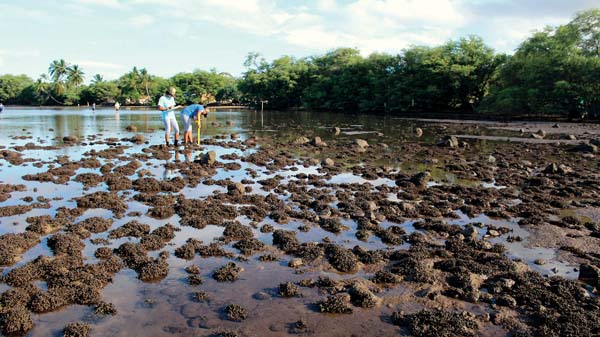 Volunteers measure sediment and record patches of gorilla ogo during low tide along Molokai’s south shore in July 2015. A survey mapping the extent of invasive algae along more than 30 miles and 2,800 acres of the south shore was completed in April. Organizers hope to start removal of the algae next summer. -- Molokai Dispatch photo

Residents on Molokai have long complained about the thick mats of invasive algae clogging up the south shoreline, but nobody really knew just how bad it was, said wildlife biologist Arleone Dibben-Young.

Dibben-Young was among a team of scientists and volunteers who waded through more than 30 miles and 2,800 acres of shallow waters to measure, tally and map the algae. The findings? Prickly seaweed appeared in 45 percent, or 1,272 acres, of the acres surveyed; gorilla ogo in 21 percent, or 587 acres; and hookweed in 10 percent, or 286 acres.

“That was a good reality check for the community,” said Dibben-Young, who presented the report on Oahu earlier this month. “This is the first time we have an accurate picture of how bad it is.”

The invasive algae are harmful to both the natural environment and marine industries. And Molokai, which has the longest contiguous fringing reef in the U.S., offers the perfect habitat for the quick-spreading algae. 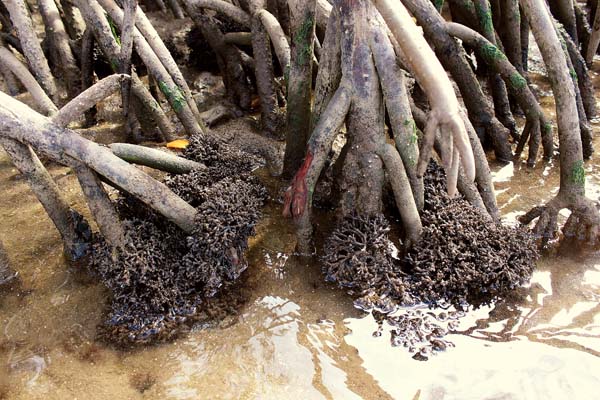 Gorilla ogo clings to mangrove roots along Molokai’s south shore in this photo from July 2015. The survey found that invasive algae tend to thrive around the calm fishponds and the thick-rooted mangrove, which is also invasive. -- Molokai Dispatch photo

The first known occurrence of gorilla ogo in Hawaii was on Oahu in 1946, according to a shoreline management plan that Dibben-Young is authoring. Researchers think the invasive species may have hitched onto U.S. warships returning home after liberating the Philippines during World War II.

But, as with many invasive species, the algae that cover Molokai’s south shore were introduced with good intentions.

A brittle seaweed with tiny, cylindrical branches, gorilla ogo was brought to Oahu in the 1970s for aquaculture research and to produce agar for economic purposes. In 1992, researchers placed the ogo in floating cages for experimental food production on Molokai. The trials failed but allowed the ogo to take hold along the reef flat.

The earliest record of hookweed in Hawaii goes back to 1909. In 1974, the reddish or brownish seaweed with curling branches was introduced to Kaneohe Bay for aquaculture research before it became invasive.

Meanwhile, prickly seaweed, which grows in clumps of spiny branches, is believed to have been accidentally carried from Guam to Hawaii on a fuel barge in 1950. It’s now “the most widespread alien seaweed in Hawaii,” according to the state Department of Land and Natural Resources website. 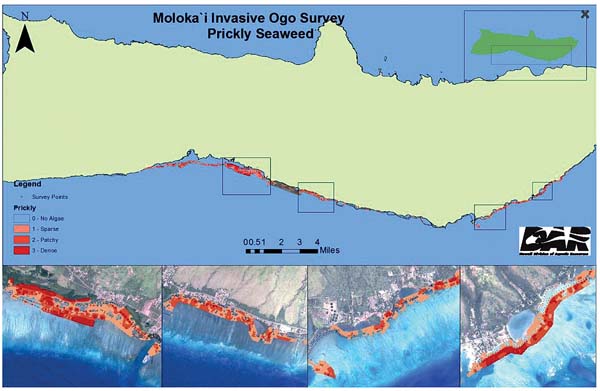 This map shows the extent of the invasive prickly seaweed on the Molokai shoreline. -- Photo courtesy of Arleone Dibben-Young

Molokai’s reef spans almost the entire 38-mile south shoreline. In some places, the reef can reach nearly a mile offshore. But decades of grazing by feral animals, pineapple farming and ranching have caused plenty of erosion that’s made its way to the ocean, Dibben-Young said.

“A large part of this ecosystem is made up of shallow water that is protected from high wave action, which creates a perfect habitat for algae growth,” the DLNR Division of Aquatic Resources Aquatic Invasive Species Team explained in an email. “When these habitats are impacted by sedimentation and nutrients from the land, it creates ideal growing conditions for invasive algae.”

Each of the three types of algae can easily spread by fragmenting. They displace native limu and catch on boat hulls, making them less fuel-efficient. They can create thick mats that block sunlight, kill coral and seaweed and drift around in clumps that can hinder ocean and beach use.

“While we would not consider the Molokai’s south shore significantly worse than other places in Hawaii, there is potential for it to worsen if no action is taken to stop its spread,” the DLNR invasive species team said.

The hunt for algae 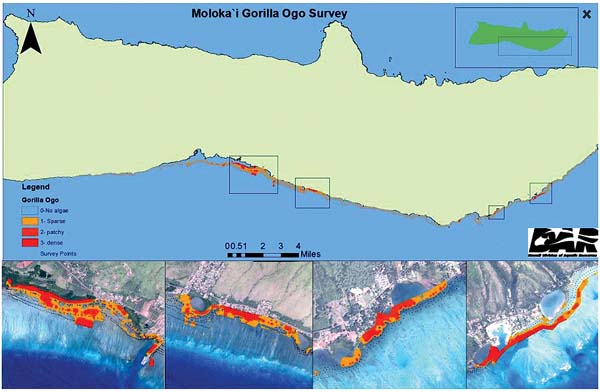 This map shows the extent of the invasive gorilla ogo on the Molokai shoreline. -- Photo courtesy of Arleone Dibben-Young

In March 2015, five Molokai High School students gave a presentation on the spread of gorilla ogo and mangrove on the island. Troubled community members agreed something had to be done.

Office of Hawaiian Affairs Trustee Colette Machado joined forces with the students and helped organize the first surveys in July 2015. At low tide, more than 40 volunteers and scientists from The Nature Conservancy and the DLNR fanned out across the shoreline. Every 50 feet, surveyors recorded a GPS point and noted the abundance and type of invasive algae, the presence of mangrove trees and the sediment type and depth. The same process was repeated for every one of the 38 sectors, from Hale O Lono Harbor on Molokai’s west end to Kahinapohaku Pond on the east end.

After a break in 2016, the final surveys were completed in April. Dibben-Young said the last stretch

from Kolo Wharf to Hale O Lono was the hardest.

“Even during low tide, at some points (the water) was up to surveyors’ necks,” she said. “It was a matter of diving down below with a snorkel and mask, grabbing a bit of (algae) and bringing it back up to the surface to identify. It was extremely difficult. We saved the worst for last.”

After the surveys were completed, data from the GPS units were downloaded and linked with algae, mangrove and sediment data in each sector to create a map of the hardest-hit areas. Some of the largest infestations were on the reefs bordering Kalamaula, the homestead community just west of the Kaunakakai Wharf, and the Kaloko’eli and Ali’i fishponds just east of the wharf. Fishponds in ‘Ualapu’e and Puko’o on the island’s east end also were algae hotspots.

“Gorilla ogo seem to thrive particularly well in the calm conditions of the many loko i’a, or fishponds, as well as locations that have invasive mangrove trees present,” DLNR’s invasive species team said. “We believe that the mangroves create favorable growing conditions for the gorilla ogo, and they may be growing and spreading more effectively together.”

The mangroves are a fight for another day. For now, the algae are growing faster and posing the greater threat to the coastline, said Dibben-Young, who is working to complete the management plan. She said she hopes removal efforts can start next summer. The Nature Conservancy has already offered to loan its super sucker to the community. The pump system sucks algae onto a small pontoon barge for sorting. Any native crabs and fish caught up in the algae would be returned to the ocean.

The community also is mulling how to dispose of the algae. It could be combined with cut mangrove to create biochar, which completely kills the algae spores, Dibben-Young said. Composting is being considered, though it’s not guaranteed to kill all the spores.

Once the algae is gone, native limu species could be planted to take their place. The Molokai and DLNR teams are discussing the creation of an herbivore zone that would prohibit hunting of certain fish and urchins that graze on the invasive algae. Similar steps have “dramatically” cut down on algae in the Kahekili Herbivore Fisheries Management Area in West Maui, the DLNR team said.

But before any of that can happen, invasive algae team members on Molokai plan to join an existing nonprofit so they can apply for permits and grants. State Rep. Lynn DeCoite, whose district covers Molokai, Lanai and East Maui, said she would wait to see how much the DLNR might need and then figure out if that could be included in the state’s invasive species fund.

On an island where the natural resources provide for many families, the health of the reefs is crucial.

“Even though (the algae) is abundant and dense, it will be able to be removed, controlled and managed,” said Dibben-Young, who also runs the nonprofit Nene O Molokai. “But it will take the community once again to be behind its removal and the long-term management of the coastline. This is a community project. We all have to do our part.”