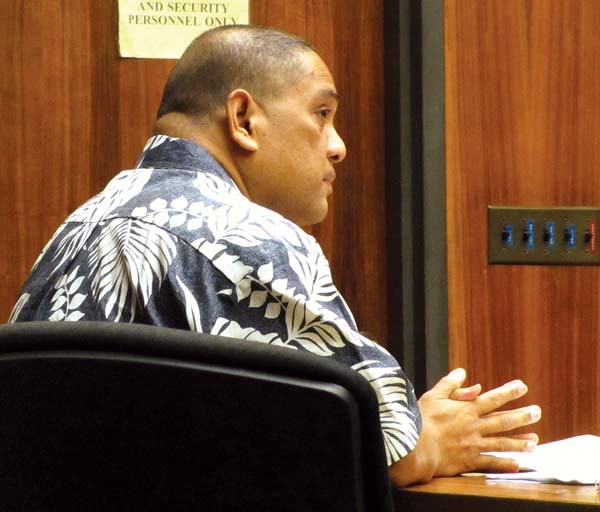 WAILUKU — Saying it didn’t appear that information not provided to the defense would have affected the outcome, a judge denied a former Maui Community Correctional Center guard’s request for a new trial on charges that he sexually assaulted an inmate three years ago.

She videotaped a sexual encounter between her and Siugpiyemal on Aug. 11, 2014, in her car at the Maui Tropical Plantation. At the time, she was a work furlough inmate at the Wailuku jail, where Siugpiyemal was employed as an adult corrections officer.

Siugpiyemal had sought a new trial, based on the prosecution not disclosing information about two of the victim’s criminal cases and her attempts to enter the Maui Drug Court program of treatment and supervision.

“We have a failure to disclose two, arguably three matters,” defense attorney Ben Lowenthal said during a hearing Thursday in 2nd Circuit Court.

Deputy Prosecutor Iwalani Gasmen said the defense didn’t specifically request the information. “There was no burden on the state to provide that,” she said.

In the 2016 cases, the victim pleaded no contest to reduced misdemeanor offenses and was sentenced in June to a one-year jail term to be served at the same time as a prison term in another case.

Deputy Prosecutor Carson Tani, who handled the victim’s 2016 cases, testified that “I wasn’t even aware that she was a pending witness” in Siugpiyemal’s case until after the verdicts were returned.

Because the prosecution didn’t provide information about the cases to the defense, the victim wasn’t questioned about them, Lowenthal said. He did cross-examine the victim about her criminal past, including cases that she is currently incarcerated for.

“Prosecutors need to be aware of what other prosecutors in the same office are doing,” Lowenthal said. “It’s not going to be enough for the other deputy to say, ‘I don’t know what the other head of the hydra is doing.’ ”

Gasmen said the defense did know that the victim was under investigation in two other police reports that were the basis for her 2016 criminal cases. “The trial outcome would not have been different if this evidence were to be presented at trial,” Gasmen said.

She noted that during the trial, Lowenthal cross-examined the victim about her criminal history and the jury knew her parole had been revoked.

After hearing testimony and arguments Thursday, 2nd Circuit Judge Peter Cahill ruled that information about the victim’s 2016 cases should have been disclosed by the prosecutor’s office.

“I don’t fault the prosecutor,” Cahill said. “More needed to be done.”

But Cahill denied the defense request for a new trial, saying what was presented hadn’t met a second requirement that the evidence would probably change the result of a trial.

“The bottom line is I cannot say that the nondisclosure of the information . . . would have materially changed the outcome of the case,” Cahill said.

Siugpiyemal is scheduled to be sentenced Oct. 3 by 2nd Circuit Judge Joseph Cardoza, who presided over the trial.