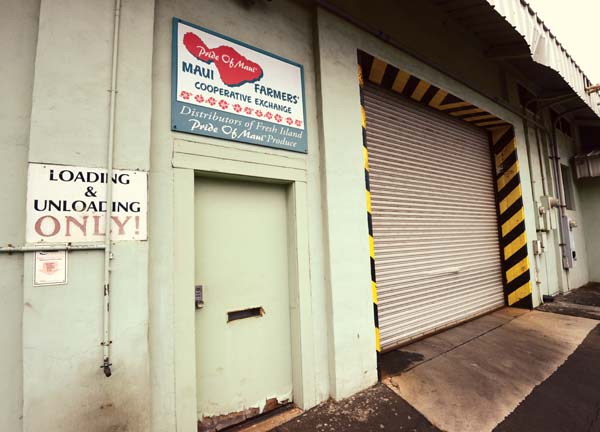 The Maui Farmers’ Cooperative Exchange on Lower Main Street closed at the end of June after 74 years in operation. This photo was taken Wednesday. The Maui News / MATTHEW THAYER photo

Agricultural shipments from Kahului Harbor were down 40 percent in the second quarter with interisland shipper Young Brothers blaming the closing of Maui’s oldest and largest farming cooperative at the end of June for the severe drop-off.

The 74-year-old Maui Farmers’ Cooperative Exchange in Wailuku had shipped cabbage and Kula sweet onions three times a week to Honolulu, the shipping company said Tuesday. The company said that agricultural sector volumes were down 5.3 percent statewide in the second quarter compared to 2016, which were “primarily driven” by the closure of the co-op.

Kula farmer and longtime co-op member Howard Hashimoto said Wednesday that the group shut down operations and its office on Lower Main Street due to dwindling membership. He said many members have retired with no one left in the family to continue the farm.

“We’re all at retirement age and our sons don’t want to take over,” said Hashimoto, 70. “We had about seven of us left and with seven we can’t run the co-op efficiently. We’d always be in the red, so we had to close up before we got further into debt.”

State business records show that the co-op was first registered in 1943. It served as a marketing resource for farmers, identifying and selling produce to buyers statewide. Farmers would pay a commission to the co-op, which would hire managers and salespeople.

Agricultural co-ops in the United States began in the 1800s and gained protection from antitrust laws through the Capper-Volstead Act in 1922. The act empowered farmers to market, price and sell their products through cooperatives.

Maui County Agricultural Specialist Kenneth Yamamura said Wednesday that wholesalers have a “huge advantage” over farmers and co-ops gave farmers “strength in numbers.” He said several co-ops formed on Maui over the years to help farmers save time and money by offering marketing, facilities and other resources to help sell their produce.

“I’m sad that they shut down because they’re really good farmers,” Yamamura said. “They were committed, and they were steady. It’s a dying breed. We need to find new ones, and there are people.

“Whether they find the land that they need, that’s a concern.”

In its heyday in the early 1980s and 1990s, the co-op had more than 30 large active members and many smaller farmers, Hashimoto said. He said that the group also had a sister co-op in Honolulu that would distribute primarily head cabbage along with Kula onions, lettuce, Chinese cabbage and tomatoes to wholesalers.

Yamamura said Maui farmers began facing headwinds as sugar plantations closed statewide, opening up thousands of acres for Oahu farmers to begin growing cabbage and other crops farmed on the Valley Isle. Large farms, such as Aloun Farms and Mari’s Garden, had thousands of acres at their disposal and did not have to pay shipping costs, he said.

“In the ’80s to ’90s, they were doing very well but as soon as land became available for vegetables it was hard to compete,” Yamamura said. “It just became a competitive disadvantage. It’s been a struggle since then.”

Hashimoto, a third-generation farmer growing persimmons and cabbage, said that shipping costs were the biggest hurdle in competing against Oahu. Since the co-op’s closure, he now only sells to individuals and wholesalers on Maui.

“They would sell it cheap so ours would have a hard time selling,” he said. “We had to come down to meet their price. If not, we couldn’t sell.”

Yamamura, whose family has been growing vegetables Upcountry since 1888, was a member of the Maui Vegetable Growers Cooperative Association. He said that group joined the Maui Farmers’ Cooperative Exchange for a time during World War II, but split up later. The association closed in the 1990s after losing its building near the harbor to Young Brothers.

Two cooperatives still exist in the county: the Maui Produce Processing Cooperative in Kula and the Hikiola Cooperative on Molokai. The Kula co-op provides farmers with cooling facilities and machines that enhance shelf life of produce. The Molokai co-op provides credit, supplies and other resources to small farmers on that island.

With the closure of the Maui Farmers’ Cooperative Exchange, farmers will be on their own to find markets and have to deal directly with wholesalers. The co-op also used to provide gas, fertilizer and other resources to help farmers, Hashimoto said.

“We have to do everything on our own now,” he said. “Even medical (insurance), we have to find on our own.

“I don’t think the co-op can exist again because the ones who are on their own — we call them independents — kind of fight each other.”

Yamamura said farmers will need to learn to demand a sustainable price from buyers. It will be difficult due to the cheap produce from the Mainland at stores such as Costco, he added.

“Hawaii consumers must realize if you don’t buy the local stuff, then you won’t have farms,” he said. “Then, it’s a world market, and you won’t have a choice once the local markets are gone.”

Yamamura said that he can see a future for an organic farm cooperative. He said organic and hydroponic operations have become the more successful and steady farms on the island.

Hashimoto joked that he plans to farm three or four more years before his “body gives way.” His family operates the largest and oldest persimmon farm on Maui.

“My sons know it’s hard work so they rather do something easier and get paid around the same amount,” he said. “But I enjoyed it, and I’m still farming.”