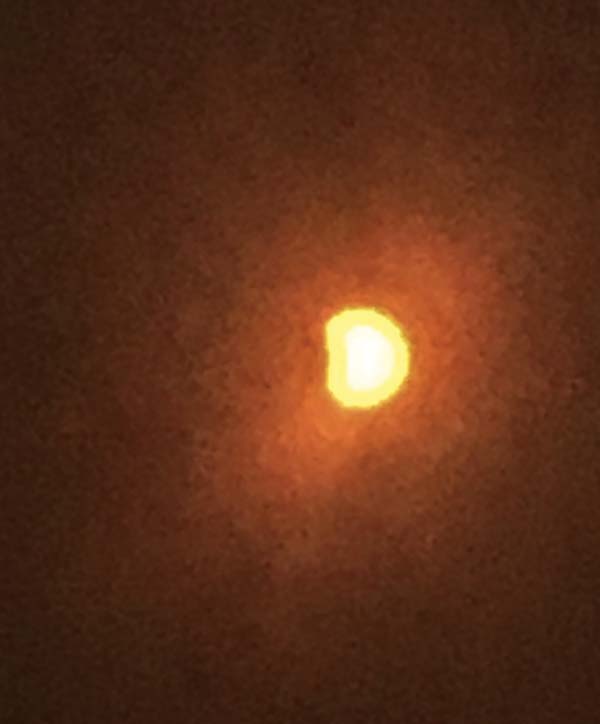 Wailuku resident Ka‘i Herrick captured this photo of the partial eclipse Monday morning from a field near the Kehalani Foodland. Hawaii saw a partial eclipse shortly after sunrise, with Maui residents reporting the best viewing times came shortly before 7 a.m. The continental U.S. saw a total eclipse from the West to East coasts, with 14 states in the path of totality. KA‘I HERRICK photo

While they didn’t have front-row seats for the big celestial show Monday morning, Mauians still found excitement watching the moon take a bite out of the sun as the “Great American Eclipse” brushed by the Hawaiian Islands before moving on to the continental United States.

Fourteen states were in the path of totality from the West to East coasts. Hawaii residents got a glimpse of around one-fourth of the sun blacked out shortly after sunrise. Maui residents said the best viewing times were a little before 7 a.m. Monday.

“It was so cool this morning,” said Wailuku resident Ka’i Herrick, who with her three daughters and husband watched the partial eclipse near a field in front the Kehalani Foodland where they could see the sunrise.

“It was perfect. It was right there,” she said.

In West Maui, Kathy McCartney said her best view was from Olowalu because cloudy skies obscured the sun in Lahaina.

The Makawao artist and author was in a car heading toward Olowalu, with McCartney in the passenger seat with her protective sun viewing glasses on around 6:50 a.m.

McCartney said out loud, “‘Oh my God, it’s happening,'” as she saw a portion of the sun eaten away.

Quickly, her friend parked the car, and McCartney put her eclipse glasses on her camera lens to take a quick photo.

McCartney said it was her first partial eclipse, and she said it was special because Hawaii was one of the first U.S. states to see the eclipse.

“We experienced it as sunrise, rest of the Mainland later morning and afternoon,” she said.

According to the website Time and Date.com, Cape Kumukahi on Hawaii island was one of the first places in the United States to see a partial eclipse. It happened at 6:01 a.m. Hawaii Standard Time, along with the coastline of Mattole Beach, south of Eureka, Calif., at or just before 9:01 Pacific Standard Time.

The last time Hawaii saw a total eclipse was in 1991. Kaupo in East Maui was in the path of the total eclipse. But, on the day of the eclipse, clouds and rainy weather hindered perfect viewing. The next total eclipse in Hawaii will be in 2106, according to the Bishop Museum.

Herrick was 12 years old and in Makawao to view the last total eclipse.

“I remember it being really cloudy. We could see it, but it was cloudy. You still could see (the sun) as it shined through the clouds,” Herrick recalled.

The Realtor wanted her girls to view an eclipse on their own, so she put her daughters, ages, 7, 11 and 17, to bed early Sunday night. Another daughter is away at college.

The family searched for eclipse viewing glasses but couldn’t find any. Fortunately, however, they had one pair a daughter had received from school last year for the March 8, 2016, partial eclipse.

Herrick said her daughters were thrilled with the partial eclipse.

She said they told her they were glad they came. “Mom, we should do this every time,” she recalled them saying.

In West Maui, McCartney, who was “fascinated with the heavens at a very young age,” was so excited about the cross-country eclipse that she was going to catch a last-minute flight to the Mainland, but she decided against it because of costly airfares and recognizing that traveling somewhere to see the total eclipse would be difficult.

But she said she was happy to stay on the Valley Isle.

And others found Maui a worthy place for eclipse viewing.

McCartney runs a rental business, Maui Vision Rental, and she said she had two Mainland guests come to Maui to view the partial eclipse atop Haleakala.

McCartney said she’s hoping to see a total eclipse in Argentina on her birthday on Dec. 14, 2020.

Wailuku resident Ka‘i Herrick captured this photo of the partial eclipse Monday morning from a field near the Kehalani Foodland. Hawaii saw a partial eclipse shortly after sunrise, with Maui residents reporting the best viewing times came shortly before 7 a.m. The continental U.S. saw a total eclipse from the West to East coasts, with 14 states in the path of totality. KA‘I HERRICK photo