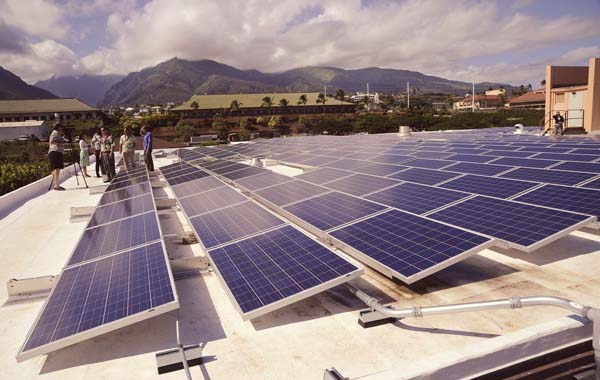 An array of solar panels cover a roof at the Cameron Center during an unveiling in December 2009. Now, as more residents power their homes with photovoltaic systems, Hawaiian Electric Co. and its subsidiaries need to modernize island grids to more efficiently incorporate alternative energy. It’s estimated to cost $205 million statewide over the next six years to upgrade systems to allow more renewable resources to come online. -- The Maui News / MATTHEW THAYER photo

For example, the upgrades can help the utility allow for more private rooftop solar in Maui County. Molokai is currently experiencing a higher amount of PV saturation on its small island grid, so currently Maui Electric Co. needs to seek additional solutions to address the problem, said Shayna Decker, director of communications for MECO.

The grid modernization will help in the long run.

To make this possible, HECO, which includes subsidiary Maui Electric, has put together a draft plan for its grid modernization strategy, which was submitted to the state Public Utilities Commission in June.

It is estimated to cost $205 million to improve the energy networks of Hawaiian Electric, Maui Electric and Hawaii Electric Light Cos. over the next six years. The utility said the upgrades would allow for more renewable resources to come online, such as solar and wind. They also would increase electric reliability and give customers more options to control their electric use, such as using smart meters to monitor home electricity use.

The draft plan is the utility’s second attempt at the modernization strategy after the PUC rejected a pricier version at $340 million. In January, the commission asked the utility to do more to integrate renewable energy and involve stakeholders in planning.

The utility is holding meetings statewide to gather input on the plan. Then, it will submit its final plan with public comments to the state PUC at the end of this month.

Maui’s meeting to discuss and share views on the plan was held Wednesday at the Cameron Center in Wailuku. Around 50 people attended, with some expressing mixed views of the draft plan.

Chris Reynolds, system operations manager at MECO, said the current grid is designed as a one-way system where a central power plant transmits electricity to customers through various lines and procedures.

With a new system, there would be better ability to have a two-way stream of power, a back and forth between the customer and utility, according to a summary of the draft plan. Now, grid operators can only estimate how much power the renewable energy resources are feeding into the grid and cannot manage it.

Currently, Maui County is getting 37 percent of is power generation from renewable energy sources.

“It’s quite a challenge to even get to (that) right now,” Reynolds said.

The company would like to achieve a renewable portfolio standard of 48 percent by 2020.

Utilities are striving to meet the Hawaii initiative to generate 100 percent of their electricity sales from renewable energy resources by 2045.

Colton Ching, vice president of energy delivery for Hawaiian Electric, said the utility had more than 200 different discussions with customers and stakeholders in developing the draft plan.

In it, customers wanted to ensure a connection of a PV system with the grid, as well as use batteries for energy storage, Ching said.

Customers also want to participate in a time-of-use program in which variable rates are given to customers who cut back their power use during peak times, as well as demand-response programs in which customers receive bill credits to reduce their energy use to stabilize the grid during high-demand periods.

MECO officials explained that with demand-response programs, residential customers who sign up have predetermined equipment such as air-conditioning units, pool pumps or water heaters temporarily cycled, or turned off momentarily.

These processes help keep the grid stable when electricity demand may exceed the amount of generation capacity that may fluctuate with variable solar and wind power sources.

But Ching said there are still customers, like his father-in-law, who do not own nor want a PV system.

Ching said the proposed plan would take in all of those views and allow customers the choice of getting a smart meter and or participating in various energy programs.

According to information presented during the meeting, smart meters would be distributed “surgically” rather and systemwide. The meters would be for enhanced for sensing and monitoring purposes, such as for customers with private rooftop solar systems or on saturated circuits.

The meters would be available for customers who want to participate in the demand-response and variable rates programs or those who want data about their electric usage.

Ching responded to a comment about how at least one person believed there would be possible adverse health effects from the smart meters. Ching disagreed and added that obtaining a smart meter would be a customer’s choice.

The proposed upgrades in the draft plan also would allow for better response time to power outages, Ching said.

Now, trouble shooters may need to drive along a power line to physically see where a problem is, which may not be easy to find.

But with new technology, systems can better pinpoint where a problem is on a line, making it faster for crews to identify and repair, Ching said.

Customers as a whole may be less affected when power problems occur because operators would be able to isolate the problem areas more precisely without needing to turn off power to larger areas to determine where issues are arising.

The draft plan and related documents are available at mauielectric.com/gridmod. Public comments on the plan can be submitted to gridmod@hawaiianelectric.com until Aug. 9.