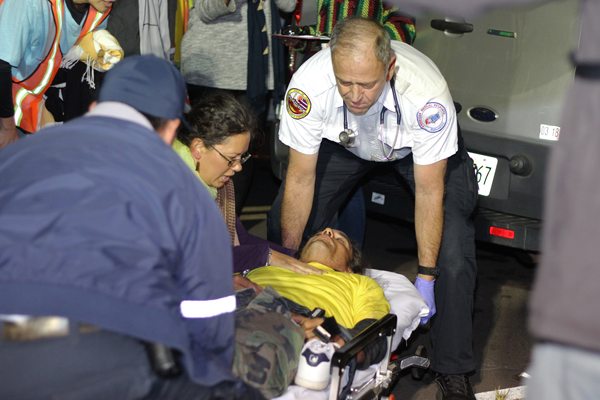 A paramedic prepares to transport an unidentified man to a waiting ambulance in front of King Kekaulike High School early Wednesday morning. The man appeared unresponsive during the protest. The Maui News COLLEEN UECHI photo

Police arrested two women and four men early Wednesday morning as they tried to block the passage of a large vehicle convoy carrying equipment to the summit of Haleakala for construction of the Daniel K. Inouye Solar Telescope, according to an announcement from the state Department of Land and Natural Resources.

The arrested protesters were booked and released, and they were given court dates for appearances. They face charges of disorderly conduct, obstructing a highway, failing to obey a police officer and/or resisting arrest. One man was taken to an emergency room for treatment before being booked, the department’s announcement said. Five others were taken to the Wailuku or Kihei police stations.

Beginning at 6 p.m. Tuesday, more than 100 people gathered at the intersection of Kula Highway and Old Haleakala Highway and awaited to confront the convoy of a half-dozen police vehicles and the four semi-trucks pulling wide-load trailers with telescope equipment, state officials said.

State officials reported that, before the arrival of the convoy at the intersection, a dozen protesters connected themselves with PVC piping to form a human chain across the road.

“Police officers gently lifted the prone protesters to the highway’s shoulder to give the big rigs enough turning radius,” the DLNR statement said. “By midnight, an estimated 60 people were still involved in a peaceful protest.”

An earlier online posting by The Maui News reported that protesters linked their arms in large metal pipes and chained their wrists together with carabiners. Also, according to that report, two men crawled under one of the semi-trucks to block it from moving.

Police later cleared the road to clear the way for the convoy of trucks and trailers.

The crowd of protesters dispersed around 5 a.m.

Witnesses said the man who was taken to the hospital was one of the people who chained his wrists to other protesters. Wailuku resident Charles Revard, who was also in the human chain, said he saw the man lying on his back with a police officer’s knee pressed against his cheek.

“He was saying, ‘Help me, get off of me.’ He kept on saying that over and over and over again,” Revard recalled. “And then I asked him if he could breathe, and he said he couldn’t. And that’s when I started screaming, like, ‘He can’t breathe!'”

The man was lying on the ground for at least 10 minutes until paramedics arrived at around 4:30 a.m. His condition was unknown as of noon. An attempt to get information on his condition Wednesday morning from Maui Health System was unsuccessful.

DLNR officials reported the convoy reached the entrance to Haleakala National Park at 6 a.m. and Science City near the summit between 7:30 and 7:45 a.m. on Wednesday.

The road to the summit was scheduled to remain closed until 2 p.m. Wednesday.

More than 60 law enforcement personnel from the Maui Police Department, Haleakala National Park and the DLNR Division of Conservation and Resources Enforcement responded to the telescope protest, the department said.