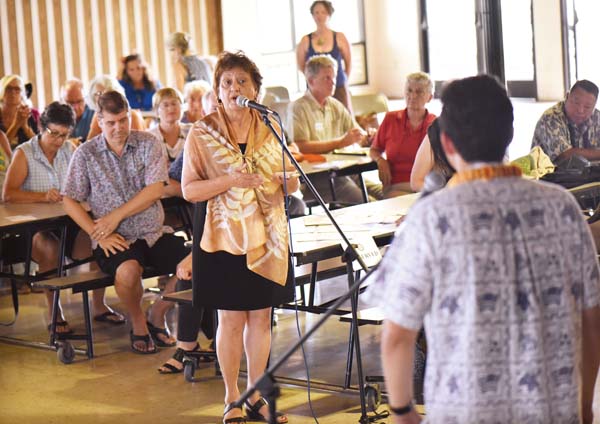 KAHULUI — With talk of the impeachment of President Donald Trump stirring on Capitol Hill, Hawaii U.S. Sen. Brian Schatz addressed the possibility of the president’s removal from the White House a couple of times Tuesday during a town hall meeting before a mostly progressive crowd of about 150.

Instead of using anti-Trump rhetoric to whip up the midday crowd gathered at the Binhi At Ani Filipino Community Center in Kahului, Schatz was informative and objective, although he made clear he’s no fan of the president.

The U.S. Senate and House of Representatives have different roles in the process of impeaching a president, he said. The House drafts the articles of impeachment to initiate the process, and the Senate conducts a trial.

“As critical as I have been of the president, his conduct, and his policies . . . I have been careful to remember that there could be a time when articles of impeachment could be brought,” he said. And, if the articles come before the Senate, then “we are effectively jurors in that trial, and we would be sitting in judgment. So, I’m really careful not to prejudge a president, except to say that the law has to be followed.”

Later, in an interview with The Maui News, Schatz was asked about the possibility of impeachment, and he said, “I just don’t have a read for that” since the process is initiated in the House. 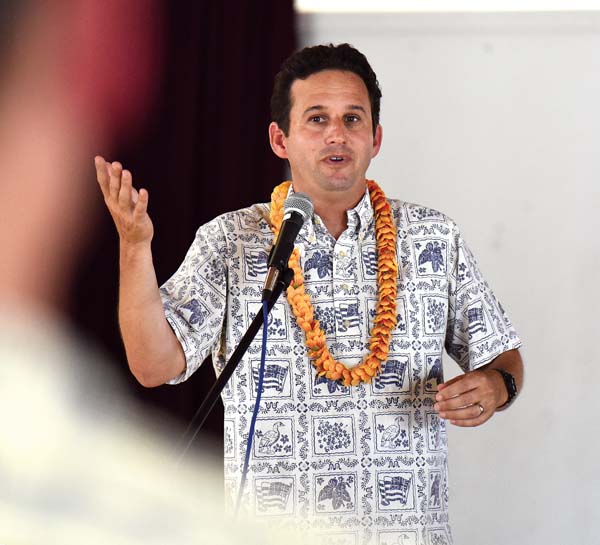 U.S. Sen. Brian Schatz, D-Hawaii, said he is cognizant of his possible role sitting in judgment of President Donald Trump should articles of impeachment be sent to the U.S. Senate. “I’m really careful not to prejudge a president, except to say that the law has to be followed,” he told about 150 people at the Binhi At Ani Filipino Community Center on Tuesday. The Maui News / MATTHEW THAYER photo

“We do not talk about it very much in the Senate, except to say that we need to be aware of the possibility that we will be sitting in judgment, and be judicious about that particular matter,” he said.

According to CBS News, U.S. Rep. Steve Cohen, D-Tenn., has announced plans to introduce articles of impeachment against Trump, citing potential obstruction of justice and violations of the U.S. Constitution.

As further grounds for impeachment, Cohen pointed to Trump’s response to violence in Charlottesville, Va., this month that left one person dead and dozens injured. Instead of unequivocally condemning the actions of neo-Nazis, white supremacists and members of the Ku Klux Klan, the president spoke of “very fine people on both sides” and blamed both sides for violence that erupted following a white nationalists march to protest the city’s plan to remove a statue of Confederate Gen. Robert E. Lee.

Schatz received some of his loudest applause when he discussed the fallout of Charlottesville and said there are Republicans “who are patriotic” who are saying that “enough is enough.”

“I think Charlottesville really changed a lot,” he said. “There’s really nothing particularly progressive or conservative about being opposed to neo-Nazism.” 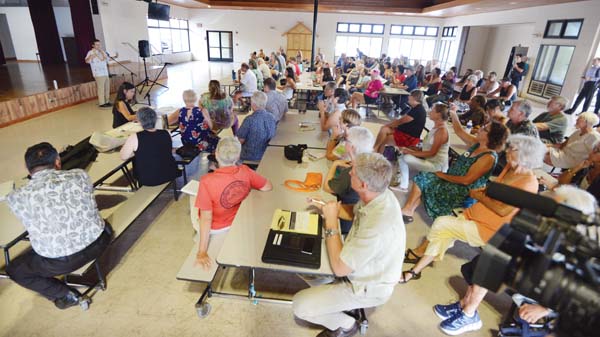 It’s bad for the country, he said, “if only one political party is vehemently opposed to racism.”

He said he believes that “there are enough conservatives with a conscience, with a love for the country . . . (who believe the United States is) a country of laws and not people . . . And, that there are basic standards of human decency.”

Schatz drew national attention Aug. 15 when he tweeted — following Trump’s remarks about Charlottesville — that “as a Jew, as an American, as a human, words cannot express my disgust and disappointment. This is not my president.”

When asked about his statement following the town hall meeting, Schatz said: “I’ve never seen an American leader lack clarity about the most basic moral questions, about literally who the bad guys are and who the good guys are. And so this was a deep personal disappointment to many of us, because whatever one’s views are on the Affordable Care Act or gay marriage or reproductive choice or the Supreme Court, we ought to all be able to agree that the people marching and shouting Nazi slogans need to be rebuked. And so I felt very strongly about that. And, I think that a lot of my Republican colleagues do feel the same way. But I don’t know for sure if it’s a watershed in political terms. I’ll just tell you that I thought it was a watershed morally.”

Schatz expressed optimism for a turnaround.

“I think it’s going to get better,” he said. “I don’t know when, but this is exhausting for the country. I think that over the next couple of months we may see Republicans and Democrats coming together and saying, ‘We don’t want to be led this way. And this person is uniquely dangerous to American values.’ And that’s got nothing to do with the fact that he decided to run under a Republican banner, but rather that he’s not displaying the kind of moral leadership that we would expect in a president.”

Also speaking on numerous other subjects, Schatz said many of Trump’s budget proposals that came through Office of Budget and Management Director Mick Mulvaney were simply “ignored” by Congress.

And, Hawaii came out of the budget appropriations process with an “excellent” bill for the 2017 fiscal year that expires at the end of September, he said.

“There’s an old saying in the Senate that there are actually three political parties: Democrats, Republicans and appropriators,” he said. “We’ve done pretty well with the appropriations process.”

On North Korea and its ongoing tests of intercontinental ballistic missiles, Schatz said that the first question he gets is: “Are we safe?”

And, “the answer is yes,” he said. “We are safe for a couple of reasons. We do have a missile defense that now works. It didn’t work always, and now it does. But also, although the North Koreans have shown an increasing capability in terms of an ICBM, they haven’t put all the technology together. Although they are moving faster than we want, they are not anywhere near being able put it all together and put us in danger. The problem is that we’re no longer talking about decades away. We are talking about — if everything goes right for them — years.”

Schatz advocated aggressive diplomacy, beginning at low, intermediary levels, but he cautioned against relying too much on the influence of China, North Korea’s chief ally.

“People put too much faith in the ability and the inclination of the Chinese government to get involved in this,” he said. “They don’t want a refugee problem on their border, and that’s pretty much where this conversation ends. . . . They are not going to do our foreign policy for us.”

When asked about Trump’s promise to unleash “fire and fury” in response to threats from North Korea, Schatz said that the president was “speaking off the cuff.”

“And that may work when you’re running for office, but it is extraordinarily risky when you’re dealing with North Korea,” he said.