Schools start without bus rides for some students 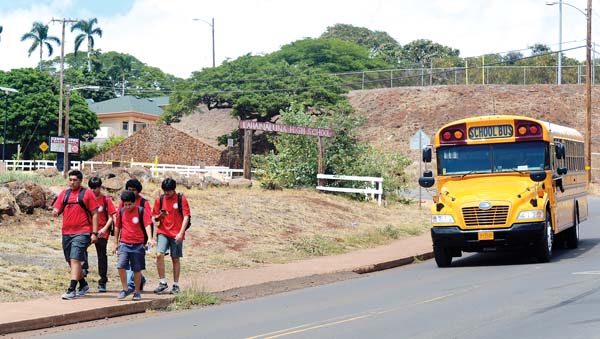 LAHAINA — Parents with children attending Lahainaluna High School on Monday called the suspended school bus service “messed up” and wondered how long it would last.

The suspension of service on some routes at at Lahainaluna High, Baldwin High and Iao Intermediate — affecting 383 students — has been caused by a shortage of qualified bus drivers for new transportation provider, Ground Transport.

The driver shortage also is impacting Maui High bus riders, who were notified last week about consolidated routes due to the driver shortage. Maui Waena Intermediate bus riders joined the list of those affected Monday; some of their routes and times were altered, the Department of Education said.

Special education and elementary school students were not affected.

A total of 161 students are impacted by the route suspensions at Lahainaluna; 78 at Baldwin and 144 at Iao, said state Department of Education spokesman Derek Inoshita on Monday.

The official first day of the public school year was Monday, but the affected schools will not have full enrollments until Wednesday. On Monday, only the freshman classes at Lahainaluna and Maui High were in session.

Inoshita said both schools reported no problems related to the bus issues. He said the schools are accommodating students who may arrive late, including serving breakfast to students on modified routes even if they are late.

Parent Daniel Tancayo of Wahikuli had to deal with a lot of traffic going up Lahainaluna Road on Monday morning to take his freshman daughter, Laie, who would normally ride the bus, to school. He suspects the traffic was due to the first day of school at Lahainaluna, Lahaina Intermediate and Princess Nahienaena, which all feed off Lahainaluna Road, and some, perhaps, from the lack of bus service.

Tancayo expects traffic to worsen as the rest of Lahainaluna’s students head back to school Wednesday.

He called the situation “messed up” and questioned why parents were notified so close to the first day of school. His family found out about the temporarily suspended routes from news reports over the weekend.

Tancayo joked that he would tell his daughter to walk down to Lahaina Intermediate, where her brother can catch the bus home. His son’s route was not affected.

Florentino Castaneto of Napili said his son normally would ride the bus home from school but cannot now. He called the situation sad.

Castaneto said he found out about the suspended bus service Sunday night, but fortunately Monday was his day off so he could pick up his son. That won’t be the case today, when he will probably have to rely on his brother to pick up the child.

He and his two children left Napili at 6:45 a.m. to beat the traffic; he also had to make a stop at King Kamehameha III Elementary School.

“Lucky we leave early,” he said, noting that the traffic was bad.

In Kahului at 3 p.m. Monday, there was one bus leaving Maui High and another sitting in front of the office. Inoshita said the buses probably were picking up students later than usual due to the consolidated routes.

The DOE released a schedule Monday afternoon of the new route times for Maui High and Maui Waena. They can be found at bit.ly/2vHL2Gv.

Some routes were not affected, but other routes have Maui High students waiting for more than an hour for the bus home from school. In the afternoon, wait times range from 23 minutes to 68 minutes.

Some Maui Waena students will have later pick-up times in the morning and earlier departure times from school, compared to the past.

“Due to a lack of available school bus drivers on Maui, bus routes at these schools will be consolidated to adjust to fewer personnel,” said Assistant Superintendent Dann Carlson in a news release Monday afternoon. “As a result, route times will be modified to accommodate the longer distances and students will see some delays and slightly longer travel times.

“We apologize for this temporary inconvenience, and routes will be restored as new bus drivers are hired.”

When the driver shortage was announced last week, the Education Department planned to provide Maui Bus passes for students in the three schools. But Mayor Alan Arakawa said that the public buses cannot handle the expected influx of students “with a couple of 30 passenger buses.”

A Maui Bus stop nearby Lahainaluna was empty Monday after school.

The Education Department said Friday that Oahu-based Ground Transport, which won a seven-year contract for the Baldwin, Maui and Lahaina areas beginning this school year, was about 15 drivers short. Roberts Hawaii previously held the school contracts for all of Maui, as well as the Maui Bus, and still holds the contract for the Makawao area, the largest bus route.