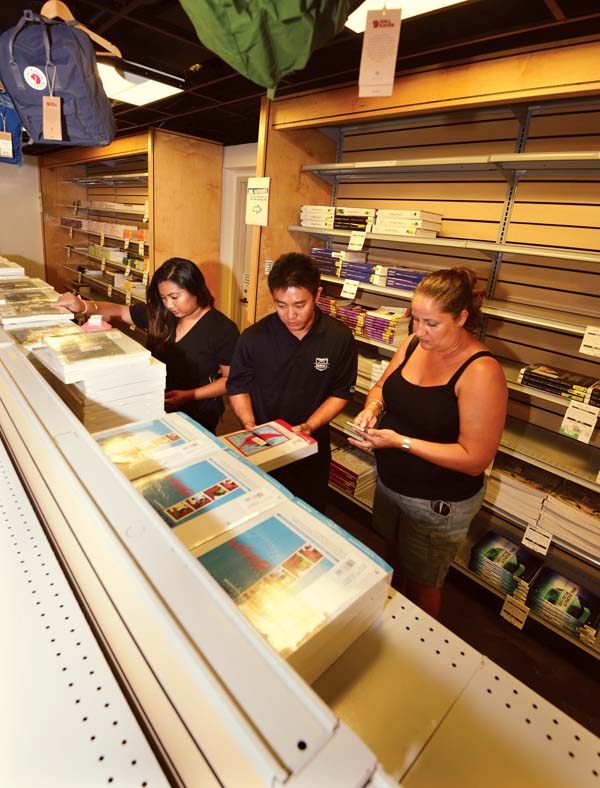 UH-MC Bookstore Assistant Manager Jerrel Park helps nursing student Leslie Garo (left) and Angela Tumaneng, who was shopping for her daughter Tuesday. Garo said she expected to spend about $500 on books, while Tumaneng said her daughter would need about $300 worth of materials. The Maui News / MATTHEW THAYER photo

The University of Hawaii Maui College registered a slight uptick in enrollment as it began the fall semester Monday with 3,318 students enrolled, up from 3,298 a year ago.

The enrollment also is higher than the spring semester, which had 2,944 students.

UH-Maui College Marketing Director Kit Zulueta said Tuesday that the numbers reflect “deliberate, calculated efforts to address the decline trend that is apparent among the university system.” For example, UH-MC had 4,527 students enrolled in 2011; that number dropped to 3,800 students in 2014, continuing a downward trend from the previous year.

“Our leadership decided to take steps that’s within our authority to help keep our students in school by giving them more control of their enrollment,” Zulueta said.

She explained that students were automatically removed from classes if they failed to pay their tuition and fees by a deadline. But, this year, there was a collaborative effort among the admissions department, counselors, faculty and support staff to work with students to allow them to continue their education. This meant calling each student with a problem, Zulueta said.

“Each student has a unique situation, and instead of automatically dropping them, we worked with them on their requirements,” she added.

There are 169 students at UH-Maui College who received the scholarship this semester. Amounts varied but ran as high as $3,000.

The state Legislature appropriated $1.8 million each year over the next two years, UH officials said. Central Maui Rep. Justin Woodson was given credit for spearheading the program, working with UH and state administration officials to establish the program. The actual bill did not pass, but funding for the program was included in the state two-year budget last session, according to UH.

UH spokesman Dan Meisenzahl said Tuesday that UH-Maui College was given $250,000 to cover scholarships through July 20 and more funding will be available for scholarships. UH is encouraging students to enroll in college and to apply for the scholarship for the spring semester.

UH Vice President for Community Colleges John Morton praised Gov. David Ige and the Legislature for its support of the Hawai’i Promise scholarships.

“The governor and the Legislature recognized the importance of this program and the need for those last dollars to make it possible for qualified students to go to college,” Morton said on the UH website.

To be eligible for the scholarship, students need to qualify for state resident tuition and be enrolled in a degree or certificate program at a UH community college for at least six credits per semester. Students also need to submit the Free Application for Federal Student Aid to determine their unmet need and maintain standards of academic progress, UH said.

The UH-Maui College Financial Aid office can answer questions via email mauifa@hawaii.edu or by phone at 984-3277.

In other activities going on this year, the college is looking at developing its study abroad program, which would provide students international mobility and exposure, Zulueta said. More student recruitment events, such as the Transfer and College Fair, career fair and financial aid workshops, are planned.