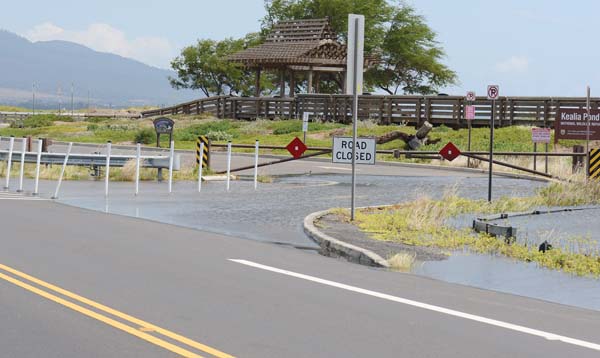 King tides this summer have not caused any significant impacts on Maui, though Kealia Pond has encroached on North Kihei Road. The Maui News / MATTHEW THAYER photo

King tides this summer have not caused any significant impacts on Maui, though Kealia Pond has encroached on North Kihei Road and docks at the Kihei Boat Ramp were nearly submerged recently.

“So far, to my knowledge there haven’t been any reports of significant impacts or damages on Maui, but the public is definitely noticing the high water levels,” said Tara Owens, a coastal hazards specialist with the University of Hawaii Sea Grant College Program and a liaison to Maui County.

King tides are caused by peak high tides coinciding with unusually high sea levels. The peak periods included dates in May, June and July, though the National Weather Service put out a special weather statement about the possibility of flooding due to king tides last weekend.

“Our current water levels are now equally high or even higher, than those past few months,” Owens said Thursday.

This has led to the flooding at Kealia Pond, which was caused by the elevated sea levels as well as recent rain, she said. The Maui News received a Letter to the Editor from Laurie Barger, who said that the docks at the Kihei Boat Ramp were “almost submerged” Aug. 18.

The cause of the elevated sea levels are not just king tides but a “stacking effect” of several factors, Owens said.

A key factor is a “bulge of warm water circulating around the Hawaiian Islands” as seen on recent satellite imagery, she said. It is thought that the cause is partly related to a mesoscale eddy that shows up periodically and temporarily raises the sea surface by several inches.

Mesoscale eddies are spinning masses of water 50 to 300 miles in diameter, according to the website phys.org.

“These show up periodically and have the effect of temporarily raising the sea surface by several inches,” Owens said.

“This has been an unusual summer with these other factors in various combinations leading to unusual flooding, wave run-up and/or erosion in localized areas,” she said.

The astronomic high tides will continue to diminish over the next couple of months and then increase in the winter king tides season, Owens said.

She encouraged the public to help document the high water levels by submitting photos, such as the observation at the Kihei Boat Ramp, to the Hawaii King Tides project at ccsr.seagrant.soest.hawaii.edu/king-tides.

Jim Luecke, assistant curator of Maui Ocean Center, lifts up the final Hawaiian green sea turtle to be released Thursday afternoon about a mile offshore from Olowalu. The center has raised and released 72 turtles since 1998. The Maui News / CHRIS SUGIDONO photo

Six turtles were released into the ocean after being raised for the past two years at the Maui Ocean Center in Maalaea. The Maui News / CHRIS SUGIDONO photo

Aliah Ayau of Kamehameha Schools Maui sets a ball in front of Tatiana Martinez during the first set of the Warriors’ 25-17, 25-16, 25-22 win over Maui High on Thursday at Kaulaheanuiokamoku Gym. The Maui News / MATTHEW THAYER photo

The Warriors’ Talia Leauanae directs a kill past the Sabers’ Kawai Houpo in the first set. The Maui News / MATTHEW THAYER photo

King tides this summer have not caused any significant impacts on Maui, though Kealia Pond has encroached on North Kihei Road. The Maui News / MATTHEW THAYER photo

U.S. Sen. Mazie Hirono of Hawaii made an impassioned speech on the floor of the Senate last month to highlight Americans’ need for health insurance. This photo was taken Thursday during an interview at The Maui News. The Maui News / MATTHEW THAYER photo