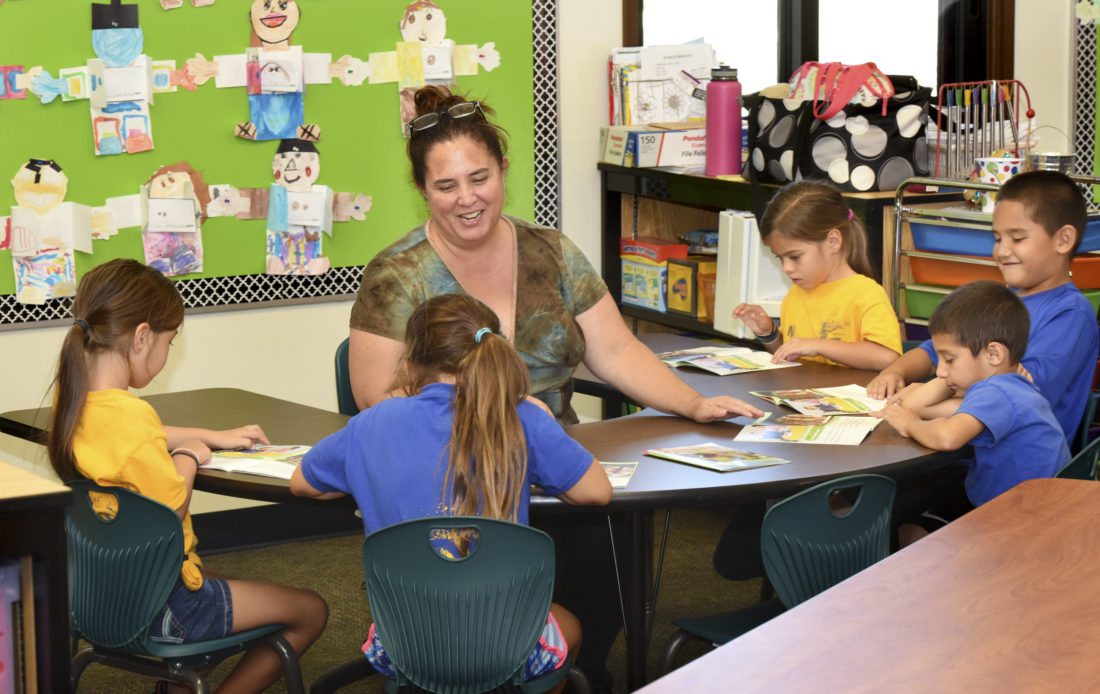 Ninety-one percent of students at Kamalii Elementary School in Kihei are meeting or exceeding science standards, one of the highest percentages of student subject-area proficiency in the state, according to a performance report released Tuesday by the state Department of Education.

But along with that, some Maui County public schools continue struggling to get at least a 25 percent proficiency level for students in science, mathematics and language arts — all subject areas assessed in the 2016-17 Strive HI Performance System report. It is an annual snapshot of student performance on key indicators.

The report shows progress on the Education Department and Board of Education’s Strategic Plan and federally required indicators under the Every Student Succeeds Act, according to the department.

Kamalii was the highest performing school in Maui County in science, language arts and mathematics, according to a list compiled by The Maui News (see Page A4). The department no longer uses a system to rank schools. 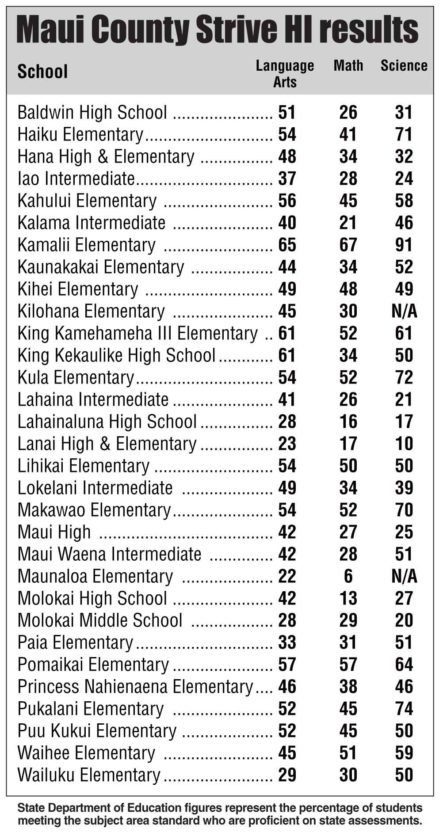 Overall performance results for public schools are mixed. Statewide, students’ proficiency in science improved, rising from 42 percent proficient in academic year 2016 to 46 percent last school year. But science was the only academic category that showed progress.

The report also analyzed other measures for student performance or lack of it in schools, including chronic absenteeism and how well students performed who are in special education or English as a second language classes or those who are economically disadvantaged.

In the department’s announcement of Strive HI results, public schools Superintendent Christina Kishimoto said: “The results are encouraging and show our focus moving in the right direction with college and career readiness measures remaining steady, including some growth in science. As we move forward, we will be very specific and purposeful in our approach to address the achievement gap and chronic absenteeism. We will take what we have learned about effective student-centered practices since 2005 and raise our implementation work to another level.”

Kathleen Dimino, complex area superintendent for the Baldwin, King Kekaulike and Maui High area, said in an email statement: “All our schools have worked hard to provide instruction that meets the needs of their communities and individual students. Our students have worked hard to engage in the learning presented and their efforts are reflected in their increased achievement scores and their growth scores. We appreciate the partnerships we share with our families and the community to support our students.”

Diminio chose to reflect on the schools as a whole, adding: “Our complex will continue to focus on increased achievement across all core areas. As a complex, we are working to bring more integrated and innovative instruction to our students that focuses on fostering students’ problem-solving skills and building effective leadership skills.”

While Kamalii Elementary and more than a handful of Maui County schools surpassed statewide averages, there were assessment results that showed student performance falling below benchmarks set last year throughout the public school system.

Molokai High had a 13 percent proficiency rate in math.

Maunaloa Elementary had a 22 percent proficiency rate in language arts and 6 percent in mathematics. There were no scores posted for science at Maunaloa or Kilohana elementary schools, both on Molokai.

(The Strive HI report does not include charter schools and suppresses some data to protect student privacy at schools with small populations, the Education Department said.)

Officials at Lanai High and Elementary, Molokai High and Maunaloa Elementary could not be immediately reached for comment Thursday.

But Lindsay Ball, complex area superintendent for the Hana, Lahaina, Lanai and Molokai district, said schools in his district have unique challenges, including difficulty with recruiting staff to teach in remote rural areas. But he added that there are good teachers and administrators already at those schools.

Ball recognized that there are subject areas the schools need to work on, and state education administration leaders are working on a way for principals to have more autonomy at their schools, rather than having a “top down” structure.

Ball said absenteeism is a challenge for rural schools where a missed bus ride more than likely means a student will be absent for the day. In Central Maui, students typically have more transportation options or shorter distances to travel to school, he pointed out.

But even schools that lagged behind others showed some bright points.

As for Lanai, the school promoted 100 percent of the freshmen on time to the 10th grade and 81 percent of its students graduate on time, Ball pointed out.

Molokai High has the best college-going rate among all Maui County schools at 56 percent.

Another Maui County School singled out by the Education Department for achievement in the report was Makawao Elementary School. It posted a 9 percentage point gain overall in English language arts/literacy growth from 2015 through last school year. It was the only Maui County school to achieve a gain of more than 7 percentage points in this area.

Individual school reports can be found at www.hawaiipublicschools.org/ParentsAndStudents/EnrollingInSchool/SchoolFinder/Pages/home.aspx.

* Melissa Tanji can be reached at mtanji@mauinews.com. City Editor Brian Perry contributed to this report.