Baldwin Beach – ‘back to its natural state’

With homeless camp gone, beach is available for parkgoers — but work is still needed 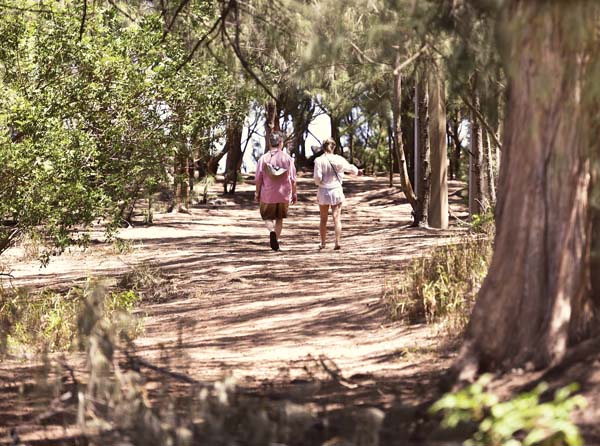 A couple walks on a path that was bordered by tents and campsites before this year’s cleanup. -- The Maui News / MATTHEW THAYER photo

Four months earlier, the same area had been littered with rubbish and makeshift tents occupied by the nearly 100 homeless and transient campers living along Baldwin Beach and Paia Bay. But on May 23, after a year of beachgoer complaints about safety and trash, the county cleared everyone out. Trayser was one of several people Wednesday who said conditions have improved vastly since then.

“Everybody was really happy that it was back to its natural state,” Trayser said. “I’d say overall improvement: five out of five stars. It definitely made a huge difference.”

While the occasional soda can or plastic fork can be found amongst the ironwoods, the area was mostly clean and quiet Wednesday. Concrete pillars once tagged with colorful graffiti are now painted a neutral brown. A beach chair and partially deflated soccer ball are some of the few reminders that dozens of people once lived there.

“It looked like there was another city here,” said Kahului resident Jim Petitte, though he added that the campers had “never bothered us.”

This photo taken in May shows a campsite on the day officials evicted homeless people from Baldwin Beach Park. -- The Maui News / MATTHEW THAYER photo

Petitte, who comes to the beach daily with his wife, Anna, to pray and exercise, commented on how clean the area had been since May. He said he hadn’t seen any signs of the encampment going back to what it once was.

“Since they kicked them out of here, they haven’t been back,” Petitte said.

However, there’s still work to do on the Paia Bay side, where a couple of large campsites have been cleared out but full trash bags, mangled bikes and tents are still embedded in the bushes.

“It’s not an overnight success. It’s an ongoing continual effort,” said Kaala Buenconsejo, director of the county Department of Parks and Recreation. “I’d say 90 percent of it is out of there. The last 10 percent is the daily maintenance.”

After the county cleared out the park back in May, the parks and Public Works departments, as well as community volunteers and a work line from the Maui Community Correctional Center, began picking up the leftover trash and belongings. 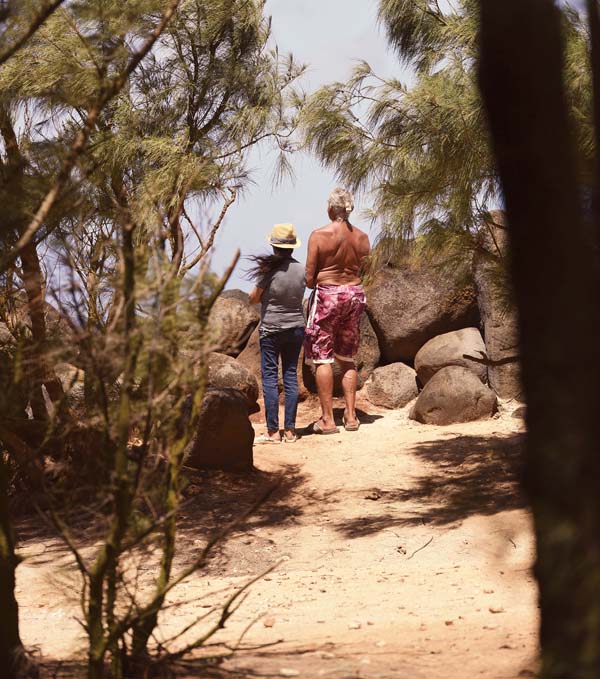 Jim and Anna Petitte pause to pray at a section of Baldwin Beach Park that was once in the middle of a homeless camp. -- The Maui News / MATTHEW THAYER photo

Some campers tried to return the day after, but park rangers and police have been trying to stay on top of enforcement and cleanup on a regular basis, Buenconsejo said.

“The biggest tool is to continue to keep it clean and don’t let the camps become overgrown,” he said. “We’ll always be working, unfortunately, to police the area. But hopefully we can get to the point where there is zero visibility of (the rubbish). But right now we’re just doing our best to maintain what’s currently going on.”

Makawao resident Tony Leone comes to the beach every day. He said there are still a couple of “resident homeless” who always stay at the park, but overall, the beach is clear of the usual campers.

“People come and go, but there haven’t been cars that stayed because they kick them out at night,” Leone said. 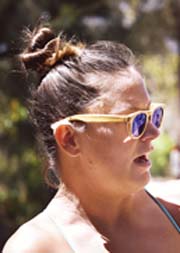 County and nonprofit officials think some people might have left Maui or simply went back to their homes. Back in May, the county Department of Housing and Human Concerns estimated that about 90 percent of the people staying at the beach park were traveling campers from the Mainland. A handful were local residents who said in interviews with The Maui News that they couldn’t get a job and were using Baldwin Beach as “a stepping stone” to housing.

Buenconsejo said there hasn’t been a surge of homeless at other parks since May, which he thinks supports the data from Housing and Human Concerns.

“If we’re not seeing an increase of homeless in other areas, it does show that it is a transient camp because they can go home or they can go somewhere else,” Buenconsejo said. “If it were a true homeless situation, we would see an influx in other parks.”

Groups that keep an eye on Maui’s homeless population said some people who’d been living at the beach did find housing. Ka Hale A Ke Ola Homeless Resource Centers took in three individuals at its shelters. Two left the program on their own and a third — a homeless veteran — later found a private rental, said Monique Yamashita, the nonprofit’s chief executive officer.

Susun White, executive director of the Pa’ia Youth & Cultural Center, still isn’t sure she’d feel safe about kids walking from the center to Baldwin Beach by themselves. Drug use is a problem in the area, and her staff members still find the occasional bag of leftover drugs and needles near the beach. The children never walk to the beach without a chaperone.

However, White said the area is “way better” in terms of cleanliness, and police and parks staff members’ efforts have been effective.

“I know they’re stretched to the limit with the whole homeless population on Maui, and not just our little area,” White said. “I think they’ve done a really incredible job in my opinion for the man force that they have.”

Kihei resident Greg Hoxsie is still concerned about public safety on the Paia Bay side. He comes to the beach every couple of weeks and said that there’s still trash in the bushes and signs of people starting to come back.

“Last time I was there, I saw a couple of shanties being rebuilt with people living in them,” Hoxsie said.

How to prevent another campsite from getting established is something the police, county homeless coordinator David Nakama and the Public Works and Parks departments have been working on. The parks department is shorthanded — five rangers for more than 100 parks — so the Community Police Unit has been “doing more than their share with the enforcement” at Baldwin Beach while also monitoring other Central Maui hot spots, Nakama said.

“There is also discussion regarding clearing the brush so that it would be more difficult for illegal campers to hide,” Nakama said. “This has been proven effective in other areas.”

Buenconsejo said the department is still chipping away at the trash. For some things, like leftover oils, batteries and needles, it’s a matter of trying to figure out where to dispose of it all, the director explained.

In the meantime, it’s a daily struggle to stem the tide of trash and campers. Some people know exactly when the rangers will be out of the park and time their return accordingly.

“It’s a game that’s being played, and we’re doing our best to control it,” Buenconsejo said.