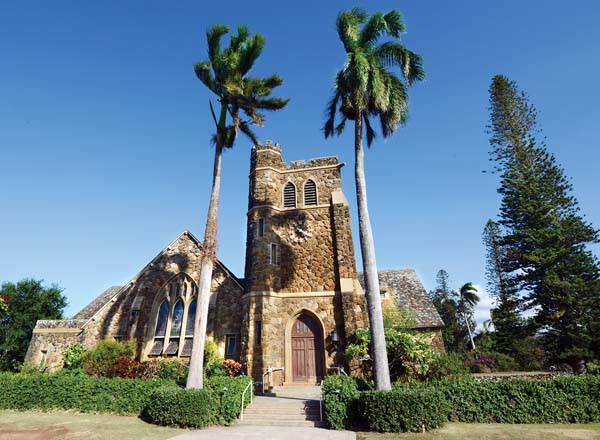 Makawao Union Church will be celebrating its centennial Sunday. The current church was built in honor of Henry Perrine Baldwin, who played the organ for the congregation for 40 years. He died in 1911. The new church building was built and completed and dedicated in September 1917. -- The Maui News / MATTHEW THAYER photo

Henry Perrine Baldwin lost his arm in a sugar mill accident around 1885, but that didn’t stop him from playing the organ at Makawao Union Church for 40 years.

“The story goes that he purchased a reed organ for the church, shifted his left hand to play the higher notes and played the lower notes with his feet,” Pastor Dave Schlicher said. “No one would have thought anything of it if he had retired as organist, but I think it tells you a lot about the kind of guy he was.”

After Baldwin died in 1911, a new sanctuary was built in honor of the organist and sugar businessman. It was completed and dedicated in two separate services on Sept. 2 and Sept. 9, 1917.

On Sunday, 100 years later, the descendants of Baldwin and many other members whose families have attended the church for generations will celebrate the centennial of the historic structure. At noon Sunday, the community hall will be open to the public for an “Aloha Hour” of fellowship and appetizers, followed by a service at 1 p.m. celebrating the rededication of the sanctuary.

“For this building still to be up and still in such good shape, we’re just really lucky that it’s been so well preserved and well taken care of by the past generations,” said Shaun Lyons, Baldwin’s great-granddaughter. 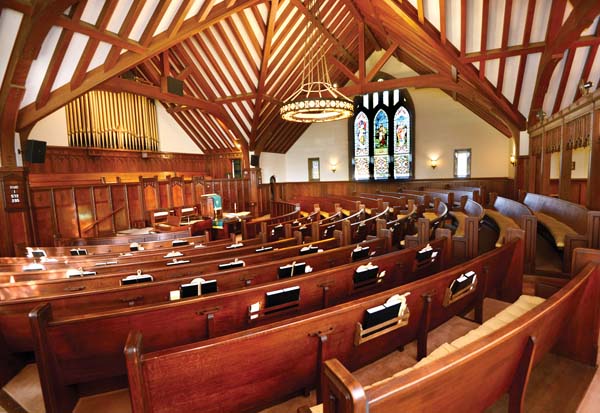 The pipe organ is a keystone of Makawao Union Church, which will be celebrating its 100th anniversary Sunday. -- The Maui News / MATTHEW THAYER photo

The church itself is actually much older, going back to 1861, when parishioners approached the Rev. Jonathan Green about starting an English-speaking congregation, Makawao Union Church moderator Jay Slaughter explained. Green, “a staunch abolitionist” who wore only wool to avoid supporting the cotton slave plantations of the South, helped found the Hawaiian-speaking Po’okela congregation in Makawao and Ka’ahumanu Church in Wailuku. The reverend had been holding services in his home since 1857, but after the Hawaiian government authorized a new church through a charter in 1861, the English-speaking Makawao Foreign Church was officially born.

The first church was built in the location of the current Makawao Cemetery, until Baldwin donated land for a new one outside of Paia.

Back then, the nearby community was bustling with activity. The hospital was two blocks away, and Maunaolu College and Old Maui High School in Hamakuapoko were up and running.

“He wanted to move the church closer to Paia, because Paia was a much more significant town at the time than Makawao,” Schlicher explained. “I think he saw it as a more promising location for the congregation.”

A frame church was built on the site in 1889, on the foundations of Baldwin’s former sugar mill at Paliuli near Rainbow Gulch, according to the National Register of Historic Places. The name Makawao Union Church was adopted in 1905, and a community hall was added in 1914, Schlicher said. In 1917, a new church was built to replace the aging one and to memorialize Baldwin after his death. 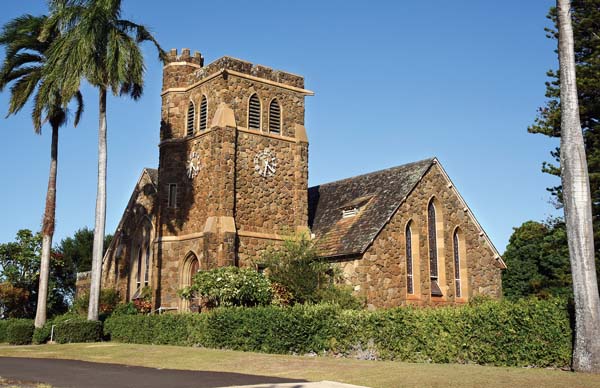 The current Makawao Union Church building, completed in 1917, replaced a frame church built in 1889. Although the church is in a remote area, when it was built, a hospital, Maunaolu College and Old Maui High School were all nearby. -- The Maui News / MATTHEW THAYER photo

Designed by renowned architect C.W. Dickey, the church was built as a single-story, Gothic-style building of reinforced concrete and “a lichen-covered, lava rock veneer,” according to the historic registry. A large Norman tower provided an entry into the church.

Slaughter said stained glass from the old church was fitted into the windows of the new one, while the oak interior was “made to look like an English village church.”

“You get the feeling of walking into a church that’s considerably older than it is,” Slaughter said.

Slaughter’s wife, Judith, pastored the church for 10 years before dying in 2013. The couple moved to Maui in 1997, and Slaughter, a retired Navy commander, dove headlong into church records and newspaper archives to research the church’s history.

As the hospital moved away and the college closed down, the community around Makawao Union slowly thinned. However, some things haven’t changed, and that includes many of the families that still attend. Lyons has been coming since she was about 4 or 5 years old. Frances Baldwin Cameron, co-founder of Hui No’eau and a cousin of Lyons’ mother, was her Sunday school teacher. In 1965, the teenage Lyons got baptized. She and her husband, Stewart McKay, would later bring their three children to the church, and now Lyons’ grandson makes six generations of her family who’ve attended.

“I absolutely love that building,” Lyons said. “It’s just magnificent. You go in there and it’s that high ceiling and all that beautiful oak paneling. . . . It really encourages you and gives you a sense of peace.”

Slaughter estimates the church’s membership at about 100, and Lyons said many families like hers have been coming for generations. For example, retired pediatrician Dr. Bill Kepler now sings in the choir with his son Chris Kepler, a drama teacher at King Kekaulike High School, and Chris Kepler’s two daughters.

“The congregationalist church is kind of in my blood,” said Lyons, who serves as a vice president of the Fred Baldwin Memorial Foundation. “It’s a very emotional attachment for me, as well as a spiritual attachment.”

Through the years, the community hall has been a gathering point for residents as well. Just about every night of the week, some kind of group meets there — from Alcoholics Anonymous to African drumming groups to dance troupes that use the hall for rehearsals and recitals. The hall is due for renovations in the near future and is a big part of the church’s outreach.

“It would be really a sin if we just locked the doors,” Slaughter said. “It’s our mission to make sure it’s available to the community.”

Slaughter said that’s why the church wants the community to come to the celebration Sunday. Schlicher, who is leaving this month after eight years at Makawao Union, hopes that community connection will be a strong part of the church’s future.

“I see in our time that we still — and probably even more than ever — need places where truly everyone is welcome,” Schlicher said. “Where doctrines and personal situations do not divide, but that everyone can come together to worship and to follow the way of Jesus.”

Chayce Akaka carries the ball for Baldwin High School during the first quarter of the Bears’ 46-14 win over Kamehameha Maui on Friday at War Memorial Stadium. — The Maui News / MATTHEW THAYER photo

Damon Martin of Kamehameha Maui is pursued by Baldwin’s Malachi Semo during a run in the first quarter. — The Maui News / MATTHEW THAYER photo

The Warriors’ Karsyn Pupunu recovers a fumble in front of the Bears’ Kapena Kamai. — The Maui News / MATTHEW THAYER photo

Erica Pilotin of Seabury Hall goes up for a shot as Molo­kai’s Sehja Pedro (left) and Mary Grace Ringor defend during the third set of the Spartans’ 25-21, 25-19, 25-19 victory over the Farmers on Friday at Erdman Athletic Center. — The Maui News / CHRIS SUGIDONO photo

The Farmers’ Shaelyn McCutcheon tries to send a shot past the Spartans’ Ella Connor. — The Maui News / CHRIS SUGIDONO photo

Makawao Union Church will be celebrating its centennial Sunday. The current church was built in honor of Henry Perrine Baldwin, who played the organ for the congregation for 40 years. He died in 1911. The new church building was built and completed and dedicated in September 1917. — The Maui News / MATTHEW THAYER photo

The pipe organ is a keystone of Makawao Union Church, which will be celebrating its 100th anniversary Sunday. — The Maui News / MATTHEW THAYER photo

The current Makawao Union Church building, completed in 1917, replaced a frame church built in 1889. Although the church is in a remote area, when it was built, a hospital, Maunaolu College and Old Maui High School were all nearby. — The Maui News / MATTHEW THAYER photo

The 2.87-megawatt Kuia Solar project is being built on 12 acres near Lahainaluna High School. It is one of two utility-scale solar projects set to be operational by mid-December. — The Maui News / MATTHEW THAYER photo

An expansive West Maui solar farm being built near Lahainaluna High School is a new addition to the hillside above Lahaina. Kuia Solar, one of two utility-sized solar projects planned for Maui, is expected to be operational in mid-December, about a year later than originally planned. This photo was taken Friday. — The Maui News / MATTHEW THAYER photo

Yellow tang are seen swimming in a tank at a store in Aiea, Oahu, in 2014. Hawaii, a major global source of aquarium fish, has stopped issuing and renewing aquarium fish collection permits in response to a recent state Supreme Court ruling. The state Department of Land and Natural Resources said Thursday that it has discontinued the permits until it receives further guidance. — AP file photo