Officials release 1,000th turtle to be rehabilitated in the islands

Return to the ocean 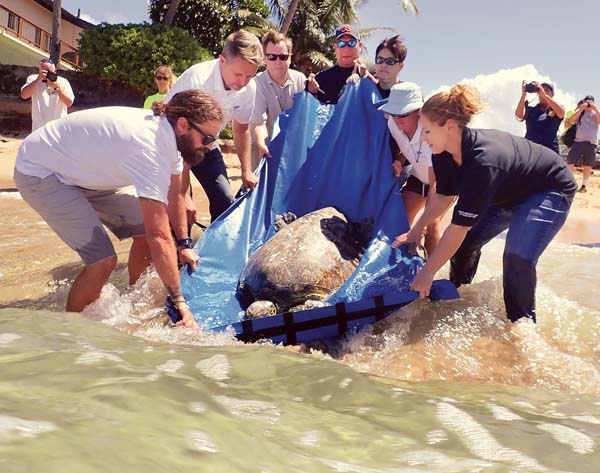 A green sea turtle that was rescued Aug. 21 with a fish hook in its mouth and fishing line threatening one of its front flippers is released into the waters of Tavares Bay on Friday afternoon by staffers from National Oceanic and Atmospheric Administration and Maui Ocean Center’s Marine Institute. The 150-pound sub-adult male was the 1,000th turtle in the state to be rehabilitated and released back into the wild by NOAA. -- The Maui News / MATTHEW THAYER photo

Federal fisheries officials released the 1,000th sea turtle rehabilitated in the Hawaiian Islands, according to the National Oceanic and Atmospheric Administration.

The agency’s fisheries stranding program in Hawaii has been responding to dead or injured sea turtles for more than 30 years. The 1,000th rehabilitated turtle, a 150-pound, sub-adult male, was released Friday afternoon at Maui’s Tavares Bay in Kuau.

The Maui Ocean Center Marine Institute rescued the turtle Aug. 21 on a Maui beach with a fish hook in its mouth and a fishing line caught in one of its flippers.

It was eventually shipped to the NOAA Inouye Regional Center in Honolulu. A team of veterinarians and researchers with NOAA examined the turtle, and it was determined that it was necessary to amputate its damaged front flipper.

After recovery, the turtle was returned to Maui for release into the wild. 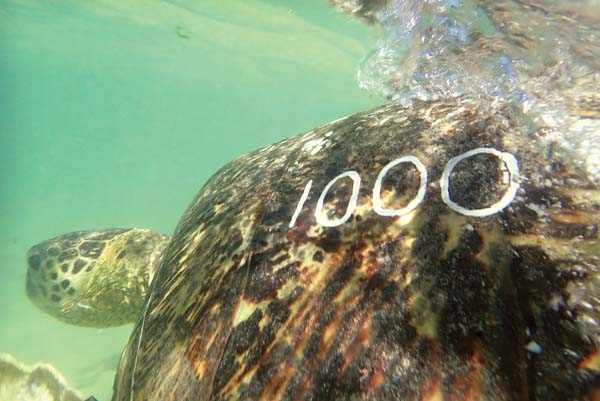 “Unfortunately, such fishing gear-related injuries and deaths are increasing in Hawaii,” the NOAA announcement said.

Marine Institute President and Board Director Tapani Vuori said that the top cause of turtle strandings in Hawaii is recreational fishing gear.

Vuori said people can help entangled turtles by cutting and removing line, if it is safe to do so.

People who spot turtles or marine mammals in distress can call the Pacific Islands Region marine mammal and entanglement hotline at (888) 256-9840.

Marine Institute turtle rescue Cheryl King first helped turtle No. 1,000 by snipping the line leading to the hook in its mouth. 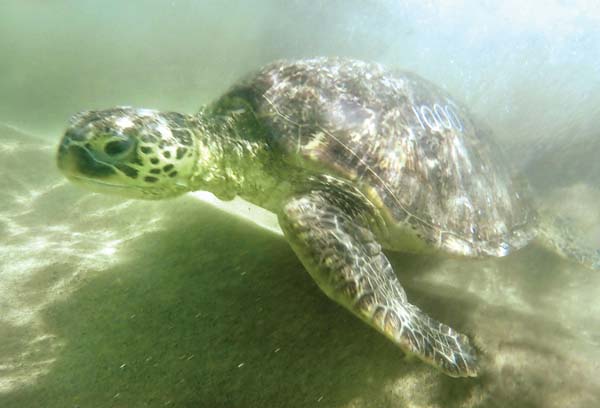 Turtle No. 1,000 is released in Tavares Bay on Friday afternoon. -- The Maui News / MATTHEW THAYER photo

When it was found hauled out on the beach several days later, it was rescued and shipped off to Oahu for treatment.

“A lot of people’s efforts went into this,” King said.

She urged people who spot the turtle with a big 1,000 on its back to help provide tracking data by calling the hotline to report the time and place of the sighting.

The federal stranding program has compiled information about threats to turtle populations while treating injured animals.

“NOAA works closely with the Maui Ocean Center Marine Institute and other partners to respond to injured or dead turtles on Maui,” the announcement said. “In the future, our collective vision is that the Maui Ocean Center Marine Institute will host a sea turtle rescue and rehabilitation center to treat threatened and endangered Hawaiian sea turtles.”

Sea turtles are a species that remains protected under state and federal laws.

The turtles are at risk from nearshore hook-and-line fishing and boat strikes. Human disturbance to habitat areas can stress foraging or basking turtles.

• Respect them by viewing them from a distance of at least 10 feet.

• Post a lookout when boating to watch out for turtles or other protected species to avoid collisions, and drive boats slowly over shallow reefs, especially near harbors.

“Fishing line and trailing gear is the greatest cause of known injury and death to sea turtles,” officials said.

For more information, go to www.fpir.noaa.gov/PRD/prd_fishing_around_sea_turtles.html.