Maui group is studying snails from one end of island to the other to track, combat parasite 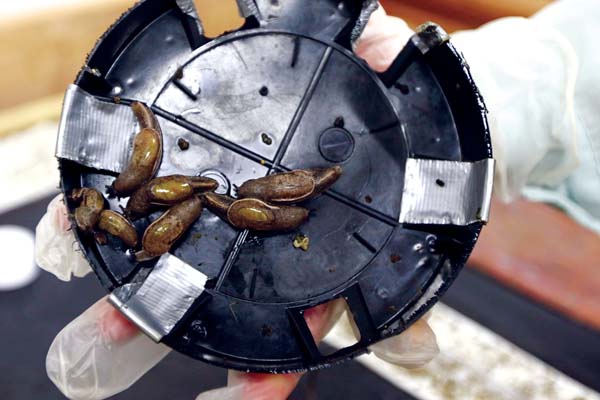 A little over 200 snails from a dozen sites in West Maui, Upcountry, Kihei and Hana are being tested for rat lungworm disease in an attempt to track and combat the mollusks that caused an unparalleled outbreak on the island earlier this year.

While reports of the disease and slug sightings have died down across the state, health officials and researchers say it is only a matter of time — or wet weather — that they return.

“It absolutely is a concern,” said Adam Radford, manager of the Maui Invasive Species Committee, on Thursday. “I do agree to some degree that it’s going out of the public’s mind, but people need to remain vigilant. The parasite has been found throughout Maui so it’s not a problem that’s going away.”

From January to March, Maui tallied six of the state’s 16 total cases of the disease this year. The Valley Isle had only two recorded cases, previously, one of which was confirmed in 2010.

The most recent case in the state was an Oahu resident, last month. 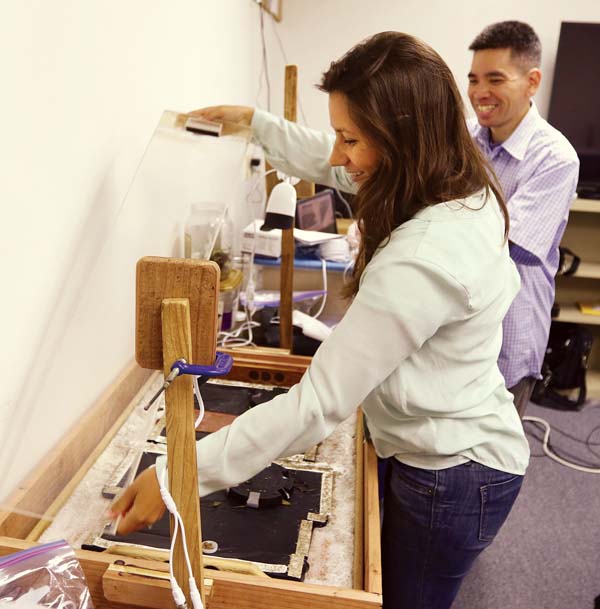 Sara Routley, public health educator for the state Department of Health, removes the lid to a snail testing enclosure next to information technology specialist Ryan Tamashiro on Thursday at their Wailuku office. -- The Maui News / CHRIS SUGIDONO photo

The outbreak has led Radford and others to further research causes of the disease, which many point to the introduction of more invasive snails.

Norine Yeung, malacology researcher at Bishop Museum, is working with Radford and conducting DNA testing of hundreds of Maui’s snails by taking a piece of tissue from each’s single foot. She began testing for the disease at the end of June and expects results in a couple of months.

“We’re pretty much bombarded by invasive land snails,” she said Thursday. “He (Radford) wants to know if it’s in other areas of Maui too.”

Rat lungworms are small parasitic roundworms, or nematodes, that live in rats and snails. Rats host the worm and pass larvae through their feces, which are eaten by the slugs. Rats then eat the slugs and repeat the cycle.

Yeung said the worms develop in different life stages in rats and worms, and need both to survive. She said it’s when it enters into other animals, or worse, humans that it becomes dangerous. 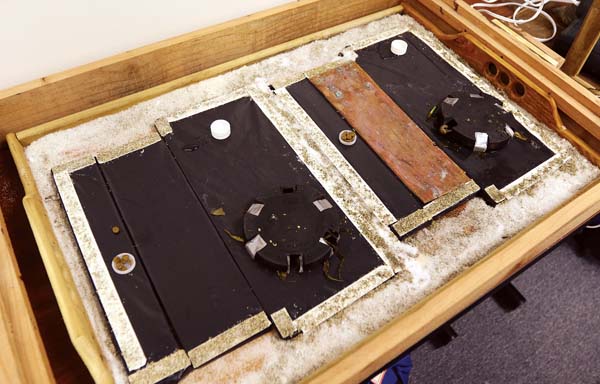 Maui health officials are testing the behavior of Hana slugs in hopes of finding a way to control their populations and prevent more cases of rat lungworm disease. -- The Maui News / CHRIS SUGIDONO photo

Humans are typically infected after eating raw fruits and vegetables contaminated by the slug. There is no cure for the disease.

“It doesn’t know where to go,” she said Thursday. “The nematode evolves in the rat so it knows the blueprint and where the lungs are. But when it goes to other animals or humans, instead of going to the lungs where they cough it up, it instead goes to the brain.

“The nematode dies in the brain and depending on how much you ingest, you could have a headache or flulike symptoms. But if you have a lot you could have seizures, a coma or die.”

Yeung has been researching invasive snails in Hawaii since 2008. She’s one of the state’s foremost experts on mollusks. She has seen cases rise over the past decade with more invasive snails being introduced to the islands and doctors getting better at diagnosing the illness.

The disease first appeared in Hawaii in the 1990s and caused an outbreak on the Big Island in the 2000s. Yeung said Maui has anecdotal evidence of the illness in 2003 or 2004.

Yeung said intensive surveys were conducted from 2004 to 2010, but were stopped due to a lack of funding. Last month, state legislators appropriated $1 million to fund studies, hire prevention workers and produce public awareness campaigns to combat the disease.

One of the biggest instigators of the outbreak is the “semi-slug,” which has likely caused the majority of cases. About 70 to 80 percent of semi-slugs carry the parasite and can carry at least twice as many nematode larvae per milligram as other mollusk species.

Maui District Health Officer Dr. Lorrin Pang said Tuesday that drier weather and increased public awareness has seemed to drop the number of reported cases on the island. His team is using the slight lull to do its own research and has set up a small test lab in a meeting room to monitor the behavior of semi-slugs from Hana.

“We’re not under the gun or having an emergency so we have time,” Pang said.

Pang’s team is videotaping and studying the behavior of 15 snails in a small enclosure to figure out a way to stop their spread. The snails are split into two groups, with one having to cross a 4-inch-thick piece of copper to reach a cup of cat food, while the other group does not.

“They really avoid it,” said Sara Routley, Health Department public health educator, pointing at the video surveillance footage sped up to 64-times normal speed. “You can see this one cruising next to the copper until he turns around.”

Routley said the slugs are most active around 1 a.m. and have not crossed the copper once over the past couple months. The electric current in the copper deters the slugs from crossing over it.

Pang said he hopes to test other, cheaper methods for controlling snails. The team is looking at using galvanized metal, diatomaceous earth, coffee grounds, biodiesel fuel and other materials rumored to stop snails.

He said methods will have to be tested under both dry and wet conditions.

While the Maui team has uncovered some clues, Yeung said she has tried many experiments including copper. She said some snails are not deterred by copper, and it loses its electrical current when it rains.

“The only barrier that keeps snails away is something that kills it, whether it’s beer, drowning or salt,” she said. “We have so many different types of invasive snail types here so it’s hard to find one bait or defense to stop them all.

“The only way to stop them is to kill them all.”

Yeung said the key to combatting the rise in rat lungworm disease is controlling either rat or snail populations. She said it may be easier to fight snails because “rats are too smart.”

“Prevention is so much more helpful,” she said. “If we continue monitoring them, we can kill it before it establishes on an island and save us millions.”

“They’ve never been in contact with the nematodes so they have no defense mechanism,” she said. “They can’t be immune to these worms quick enough.”

Various “snail jails” have been set up across the state, including the Puu Kukui watershed in West Maui, to protect local populations of snails. These provide nutrient turnover in soil and are part of Native Hawaiian cultural history.

Yeung said many native snails are endemic to one island and there are some “nice populations” in parts of Maui.

“They’re only Maui snails so if they’re gone, they’re extinct from the world,” she said.

• Always practice safe eating habits by inspecting, thoroughly washing and properly storing raw produce, especially leafy greens, regardless of where it came from, and/or cooking it properly to kill any parasites. Washing raw vegetables and fruits thoroughly under running water before eating not only prevents rat lungworm but also rinses off other contaminants.

• Prevent the consumption of snails and slugs by covering all containers, from water catchment tanks to drink containers and food dishes. Supervise young children while playing outdoors to prevent them from putting a slug or snail in their mouths.

For more information on preventing rat lungworm disease, go to the Health Department website at www.health.hawaii.gov.

Sara Routley, public health educator for the state Department of Health, removes the lid to a snail testing enclosure next to information technology specialist Ryan Tamashiro on Thursday at their Wailuku office. — The Maui News / CHRIS SUGIDONO photo

Maui health officials are testing the behavior of Hana slugs in hopes of finding a way to control their populations and prevent more cases of rat lungworm disease. — The Maui News / CHRIS SUGIDONO photo

A record high temperature of 91 degrees was logged May 17, two degrees higher than the previous record, and offers ...

The mandatory water cutback for Wailuku-Kahului-Paia customers has been lifted, the county Department of Water ...

Drug Court is next stop for Haiku man

The Maui News WAILUKU — A Haiku man was released from jail and was ordered to apply to the Maui Drug Court ...

Veterans show up anyway to honor the fallen