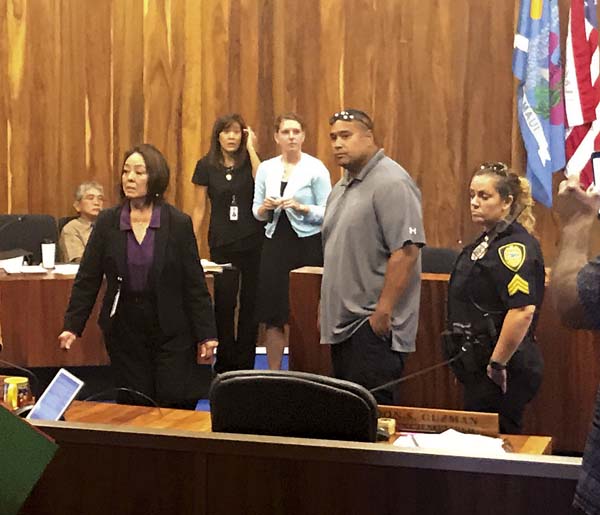 WAILUKU — The head of Alexander & Baldwin’s diversified agriculture operations told a Maui County Council committee Tuesday that the company is not farming any genetically modified crops for food or for animal feed.

Rick Volner Jr., general manger for the Diversified Agriculture section, said the only GMO work done has been on research and development for bioenergy crops. And that was because the company wanted to evaluate conventional versus GMO crops in its diversification agriculture plan for former Hawaiian Commercial & Sugar cane lands. HC&S shut down last year, leaving fallow 36,000 acres of former sugar land.

Volner’s comments came near the end of an all-day and sometimes heated council Policy, Economic Development and Agriculture Committee meeting. At least 65 people, most skeptical of A&B’s diversified agriculture plans, signed up to testify on the matter. A&B was invited to present its plans to the committee, although those plans already have been shared with the public.

Many testifiers were concerned about GMOs being grown on the former plantation land and wanted to see cultivation of food crops, such as lilikoi, mango, breadfruit and coconut. 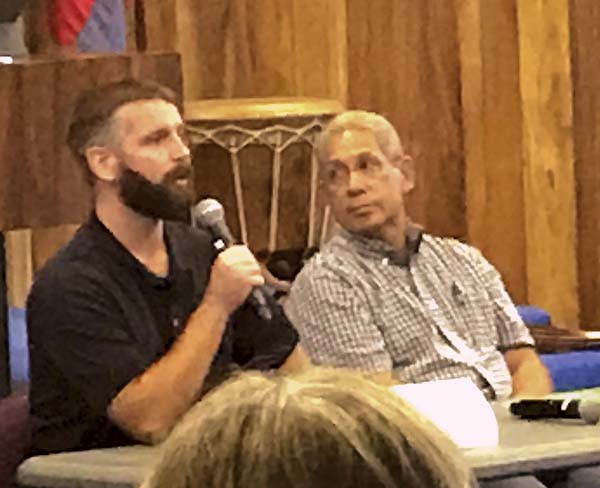 No action was scheduled, and the matter was deferred.

Most of the information shared by A&B’s Diversified Agriculture Division was not new. The company reiterated that it is focusing on livestock and growing bioenergy feedstocks and animal feed, along with pursuing agricultural leasing.

Also speaking to growing more food crops, Volner said A&B is working with the county on a new agricultural park in Kula, which would provide smaller plots for local farmers.

In his presentation, Volner told the committee that 27,000 acres out of the 36,000 former sugar lands are designated as important agricultural lands that will remain that way.

While he said some people have criticized the role A&B has had in leasing agricultural lands, Volner said “we feel it is the best way to get real farmers on the lands and do the things they ultimately know how to do better than we can.”

He also went over the three main areas A&B is looking at.

One is livestock operations, which A&B did trials for in 2015. These gave the company confidence that livestock operations are possible. Currently, expansion is underway to support 3,500 stockers/cattle on 5,000 acres. The company also is working on a new slaughter facility. Volner said such a facility would keep cattle in the state and help the industry, which may suffer during droughts.

Earlier this year, A&B formed Kulolio Ranch in Hamakuapoko in a diversified agriculture venture on 4,000 acres of old HC&S land.

The ranch, a wholly owned subsidiary of A&B, will be collaborating with Maui Cattle Co., a partnership of mostly Maui ranches.

Alex Franco, president of Maui Cattle Co., told council members that having cattle in designated A&B property — rather than different areas on the island — brought consistency to the cattle and “confidence in the marketplace.” It also helped ranchers who are always worried about droughts and having to reduce their heads of cattle.

Another large portion of the plan is bioenergy feedstocks, which includes the growing of sorghum, corn, soybean and cover crops. These can be sold as animal feed and bioenergy, which can be converted to produce power.

William Kusch, a local manager of Oakland, Calif.-based TerViva, said the company already has planted pongamia trees that produce seed oil in Kunia, Oahu, and is looking forward to working with A&B on Maui.

A&B has a partnership with TerViva to produce biofuel from pongamia trees on 250 acres in north Kihei/Maalaea. A&B officials have said that the partnership to produce seed oil could expand to 2,000 acres.

A third prong of A&B’s plan is its agriculture leasing. Volner said there is interest in pasture-fed dairy cows that could supply milk, and there’s interest in growing coffee and cacao.

Other speculators include spirit manufacturing and biomass cultivation.

Volner said the company’s plans all depend on water availability. When questions about water are answered, then more commitments could be made to those seeking to lease the lands for agricultural operations.

A&B is awaiting direction from the state on how to proceed with its East Maui water diversions and releases.

Volner said the company’s agriculture lands are unique because they’re contiguous and near the airport and the harbor.

“We still have access to a very strong labor base. We are committed in keeping those lands in ag,” Volner said.

But people shared their skepticism. Some were concerned about cows grazing on A&B’s lands and how they are releasing methane gas into the air and waste into water sources.

And some were concerned that farming would bring pesticide use and GMO crops. Some critics said the company’s agriculture plan cloaks A&B’s real intent to sell off the land.

Mark Sheehan, a leader in the SHAKA, or Sustainable Hawaiian Agriculture for the Keiki and the Aina movement, said he is an organic farmer in Haiku and can raise ginger, cacao, papayas and bananas and citrus crops without any pesticides.

He said more needs to be done to ramp up food production on Maui and one cannot look to the old plantation model. He pointed to the Hawaiian model of self-sufficiency.

SHAKA led a successful voter initiative to have a GMO moratorium in Maui County, but it was overturned by the courts.

For the first several hours in the committee meeting, emotions ran high, and on several occasions, committee Chairwoman Yuki Lei Sugimura reminded members of the audience to keep order and to not make comments or to clap. Things got so heated that Sugimura recessed the meeting 10 minutes before it was scheduled to break around 12:30 p.m.

This came after Maui District Health Officer Dr. Lorrin Pang, who was testifying on behalf of himself, brought up the issue of GMO crops and pesticides.

Sugimura reminded him that the topic of GMOs was not on the agenda. Pang continued on.

Following Pang’s testimony, Council Member Elle Cochran told the committee and Sugimura that people should be allowed to testify on GMO matters because they were concerned about GMOs being part of A&B’s diversified agriculture plan.

But Sugimura reiterated what she said at the beginning of the meeting. She said many of the testifiers were stirred up by emails and social media postings over the weekend that provided inaccurate information that the matter before the committee involved GMOs. She called for order in the gallery.

People in the audience chanted “Shame on you, shame on you,” as Sugimura called for a recess and several police officers descended to the council floor.

During a break, Cochran said she understood the people’s frustrations because the A&B presentation and testifiers were put at the end of the calendar. She added that people did not like being told not to testify about GMOs.

Cochran said that at an A&B public open house there was mention of GMO crops being grown on the former sugar cane land.

But Cochran added that “you always have a few in the crowd” who cannot contain themselves and speak out.

Also during a break, Sugimura said she was trying to keep the meeting focused on the agenda item, which was A&B’s presentation, and that came at the end of the meeting. But, as the meeting wore on, Sugimura let people discuss what they wanted, even if it related to GMOs.

She said she and other council members wanted to hear from the testifiers as well.

“We are all trying to get to the same place,” she said.

People want food for the community along with homes for working families, she said.

“A&B is one of the partners who can make Maui a better place to live,” she said.