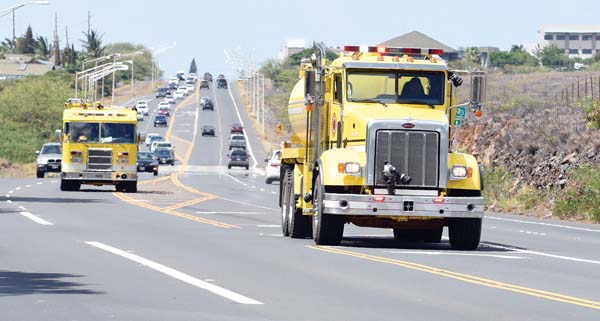 Firefighters race to the scene of a Kihei brush fire in 2016. The county auditor has taken issue with a 60 percent increase in overtime and premium pay in the Fire Department between fiscal years 2014 and 2015, when a new labor provision took effect. -- The Maui News / MATTHEW THAYER photo

Maui County Auditor Lance Taguchi is recommending that the Department of Fire and Public Safety establish a “relief pool” of workers to save the county $1.9 million to $3.2 million per year in premium pay and overtime.

In an audit released Friday, Taguchi said that the Fire Department saw a 60 percent, or $1.4 million increase, in overtime pay from fiscal 2014 to fiscal 2015. He cited a labor provision that calls for only equally ranked firefighters filling absences — which usually results in overtime.

The provision called “Rank-for-Rank Recall” is a condition in the collective bargaining agreement with the Hawaii Fire Fighters Association — IAFF Local 1463 that took effect July 1, 2014, the first day of the 2015 fiscal year.

The audit says that the Fire Department has to evaluate staffing and ensure the right mix of on-duty firefighters so as not to trigger the Rank-for-Rank provision.

Average time-and-a-half overtime costs for fiscal 2011 to fiscal 2015 were in the $1.5 million range annually, the audit says. When the Rank-for-Rank provision was implemented, those costs grew nearly $2.7 million.

The audit notes that firefighters save lives but poses the question: “How much is a life worth?”

“If the Department of Fire and Public Safety’s . . . premium pay and overtime costs are not controlled, soon taxpayers will be forced to answer,” the audit says.

Taguchi stressed Friday that the audit was not about individual firefighters and the work that they do but rather “financial management” and finding a way to control the “skyrocketing overtime costs.”

Some firefighters earned, on average, between $16,200 to $25,100 annually in premium/overtime pay, the audit said.

To resolve the problem, Taguchi recommended having a “relief pool” of on-duty firefighters, including those with rank, such as captains and drivers. He conceded that the change would not be easy to implement and that it was “going to take time,” but that “we got to try something to control these costs.”

“We are trying to make recommendations to help the department,” Taguchi said. “Basically it’s in the chief’s court right now, he can keep the status quo or stay in denial or move toward improvement.”

Fire Chief Jeff Murray took issue with the audit and the relief pool, saying that the proposal would circumvent the collective bargaining agreement. He said an arbitrator has ruled that the Rank-for-Rank provision could not be circumvented.

“(The auditor’s office) is not going to be sued. I’m going to get sued,” Murray said Friday.

He called the audit “a slap in the face” that accused the Fire Department of “mismanaging the whole process.”

Murray said it should have been expected that there would be a spike in overtime pay when the Rank-for-Rank provision was implemented and noted that overtime pay has leveled off since the initial spike.

Having a “relief pool” would be unsafe for the public and firefighters, the chief said. Firefighters replacing those of the same rank during absences ensure the same level of expertise, and a relief pool could contain firefighters who may not be familiar with a particular company’s equipment, the community or the environment.

“I just think that taking a swipe at us is completely unfair. We need to get our version of that out. It’s extremely insulting, and I don’t appreciate that,” Murray said, adding that firefighters risk their lives to protect people and property.

An official with the Hawaii Fire Fighters Association — IAFF Local 1463 on Oahu could not be reached for comment Friday.

Initially, the audit was to focus on the county’s payroll but, during a preliminary review, the Office of the County Auditor found rapidly increasing premium pay/overtime pay in the Fire Department and decided to focus there, the preface of the audit said.

Taguchi’s audit was not the only one for the Fire Department. There currently is an external audit of the department brought by the Maui County Council’s Budget and Finance Committee.

County Council Chairman Mike White’s office said that audit, which is looking at operations and items beyond overtime pay, is scheduled to be completed prior to the annual budget review, which begins in March.

Some council members have been critical of the Fire Department’s budget.

“I am a big believer in continually measuring efficiency and effectiveness. When the auditor makes recommendations, both the department and council need to respond to them constructively. The Fire Department should view this audit as a tool to help better their department.”