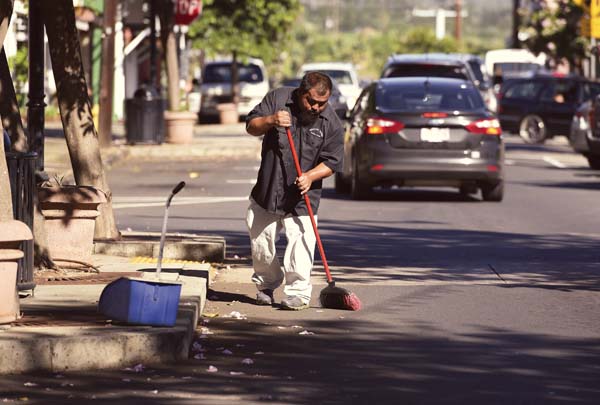 Shamrod Kekahuna cleans a crosswalk at the intersection of Wailuku’s Market and Vineyard streets Saturday morning as part of the Clean & Safe program. -- The Maui News / MATTHEW THAYER photo

“We had a daily problem with people hanging out in front of our building on the steps or coming inside the property, going to the bathroom in front of my office,” said Jonathan Starr, who has property on Main Street near Market Street. “They were making it difficult for people to go to the yoga studio and the stores.”

But since Maui County implemented a Clean & Safe program in Wailuku in July 2016, “we don’t have that anymore,” Starr said.

Through a $200,000-a-year contract with nonprofit Ho’omaika’i Services, run by retired police officer Lawrence Kauha’aha’a, the program has put people to work sweeping streets and cleaning. Kauha’aha’a is among six outreach ambassadors who walk Wailuku town, talking to business owners and others and addressing problems that often involve people with mental health and substance abuse issues.

“It just made it pleasant to be around, where it was marginal a while back,” Starr said. 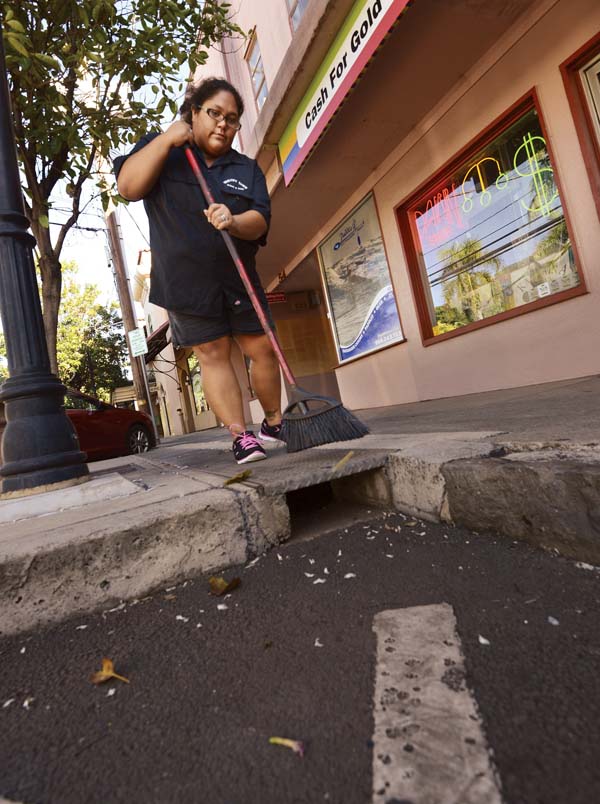 Now in its second year, the Clean & Safe program has about 20 cleaning employees, double the number when it started, Kauha’aha’a said. Crews of three work part-time shifts in the morning and afternoon seven days a week.

“The idea is that we can provide a service and get 20 people jobs and have guys out and about, working with the merchants and the homeless population, trying to come up with solutions other than having them relocate from place to place,” Kauha’aha’a said.

“We’re working toward the overall health of Wailuku,” he said. “The town is different now. That was the goal. The town just looks better.”

The cleaners work through Mental Health Kokua, which also has helped some of them find housing and other services. 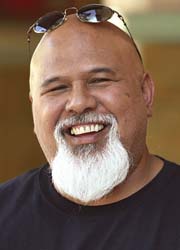 He estimated that ambassadors may come across a problem once a day, whether it’s someone panhandling in town or causing a disturbance.

“Maybe once a day you’ll have an encounter,” Kauha’aha’a said. “Some of them are as simple as saying, ‘How’s it going today? When’s the last time you saw your case manager?’

“We now know who people are, we know who their case managers are. We’re able to put them in contact with the right social service agency.

“After a year now, we have that rapport. We know how to talk to them and gain their compliance.”

He said that Mental Health Kokua has outreach workers who will respond immediately.

“A lot of times we can do this with very little fanfare. It’s easy to make a call and say so-and-so’s here,” Kauha’aha’a said. “If there’s an issue where somebody’s not responding to a case manager or a social worker, then we can always call the police.”

He said that ambassadors also have developed rapport with merchants.

“They understand how the community policing model works,” Kauha’aha’a said. “Each individual business ended up getting a security consultant in our program.”

The program has helped merchants use existing laws, such as the trespassing law, to keep away someone who doesn’t belong on their property, Kauha’aha’a said.

He said people who had been creating problems now know that such behavior won’t be tolerated.

“It’s part of conditioning people. They understand that if you do something in Wailuku town, the merchants will call the police and get prosecution,” Kauha’aha’a said. “Wailuku merchants are much wiser about how to handle these situations.

“You really got to stay vigilant.”

The result has been a change for the better in Wailuku town, both Kauha’aha’a and Starr said.

“It’s having a big effect,” said Starr, who is on the board of both the Wailuku Downtown Association and Maui Redevelopment Agency. “It seems there are more people coming to Wailuku now because they feel safer.”

Kauha’aha’a said that there are fewer vacant spaces for rent and some properties are for sale.

“Maybe they feel now things are getting better, it’s a good time to sell,” he said.

“The mix is better,” he said. “The pawn shops are diminishing.”

“There’s something going on just about every night.

“I’m getting calls from people that want to be in Wailuku now,” Starr said. “I really feel like the town is doing really well. The parking is full. That’s a sign of success, but it’s also an issue.”

Starr, a member of the International Downtown Association, has been visiting downtowns in the Los Angeles area to bring back ideas that might be tried in Wailuku town.

He said many professionals living in Central Maui want “a cool place to go and the malls aren’t really doing it.”

“The Clean & Safe program is part of a larger trend — that Wailuku is becoming our downtown,” Starr said. “Now it’s safe, it’s clean. And the next step is it’s becoming vibrant.

“And then the next stage is a little harder to define, but it’s the feeling that if you go there, you’re likely to stumble into some fun.”