Maui’s nonprofit community benefited for years from the rocker’s generosity, according to Darby Gill 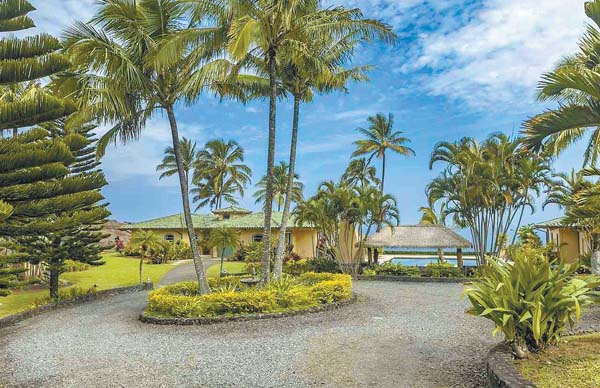 “Sammy, very quietly, has helped hundreds of Maui people and families over the years and his departure will be Maui’s loss,” said Gill, founder of A Keiki’s Dream.

Hagar also helped hundreds of children and families through his Sammy’s Keiki Aloha Fund. It was a program that provided direct financial support to families of Maui children who were treated off island for major medical conditions.

The asking price for Hagar’s Haiku home is just under $3.3 million.

The gated home “embraces solitude and seclusion,” and it features “a stately, palm-lined drive, sprawling green lawns and flora as a flowing stream receives you.”

According to www.realtor.com/news, the home has an open floor plan, vaulted ceilings and walls of windows. The upgraded gourmet kitchen has stone-topped counters and an island. There’s a brick pizza oven outside, a tiki bar and a saltwater pool with an island in the middle. A hot tub overlooks the ocean.

The property includes a one-bedroom guesthouse and a 1,000-square-foot garage, the property listing says. Hagar has made property improvements, such as a tilapia pond and a 400-foot-deep well. The property has a waterfall and a par-3 golf hole.

Hagar purchased the home after the Van Halen world tour in 1995 and wanted to spend time in Hawaii to relax. He wanted a property large enough to grow fruits and vegetables and space for a recording studio.

To see a video of the home, go to www.youtube.com/embed/ExdlWbv0jJU.

The member of the Rock and Roll Hall of Fame has sold millions of records and drawn thousands of concertgoers to his shows worldwide. Hagar’s hit songs include “I Can’t Drive 55,” “There’s Only One Way to Rock,” “Mas Tequila,” “Eagles Fly” and “Three Lock Box.”

Hagar, 70, was born in Salinas, Calif. He was the frontman for the group Montrose in the early 1970s and went on to have a solo career. Later, he joined Van Halen in 1985 and left the group in 1996. He was inducted into the Rock and Roll Hall of Fame in 2007. As a businessman, he founded the Cabo Wabo Tequila brand and restaurant chain.

Visitors to the Iao Valley Monument walk down a pathway on Sunday afternoon. The park reopened last week after being closed for repairs and slope stabilization following massive damage from heavy rains in September 2016. There’s a flash-flood watch in effect for Maui island. Weather forecasters caution that deep tropical moisture combined with decreased stability in the atmosphere could produce heavy rainfall and flash flooding. The Maui News / BRIAN PERRY photo