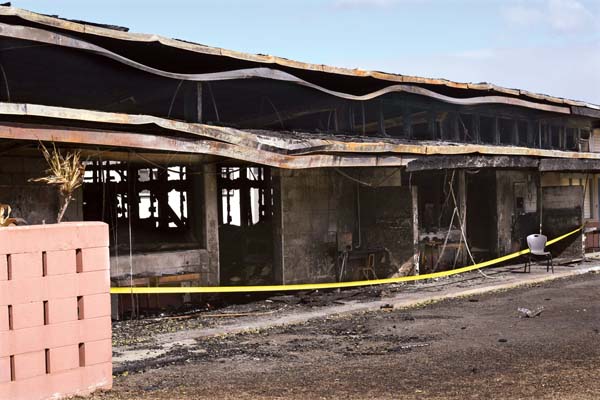 Kahului Elementary School, which was supposed to reopen today following a fire that damaged classrooms Friday, will remain closed until Monday, the state Department of Education said Wednesday.

Education Department officials did not respond to queries by email and phone Wednesday afternoon to detail the damage to the waterlines and the reasons for the extension of the closure.

The DOE’s facilities branch is working with the Maui complex area to safeguard the campus and return it to operation as soon as possible, according to the DOE news release. 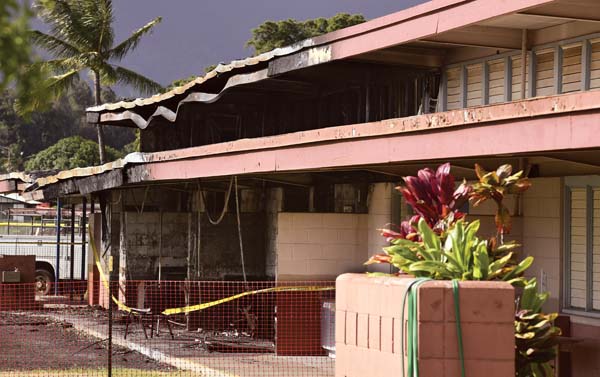 The F wing at Kahului Elementary School was damaged by fire Friday night. State Rep. Justin Woodson, who got a close look at the damage, said Wednesday that half the wing was gutted. Though not an engineer, he believes the entire wing will have to be rebuilt.

Although students have not returned to the school since the fire, school staff members have been meeting on campus to come up with contingency plans, DOE officials have said. Assistant Superintendent Dann Carlson mentioned the possible use of trailers for classrooms.

State Rep. Justin Woodson, who represents Kahului and has children attending the school, said that a trailer classroom is coming from Makawao Elementary School. Approvals also have been secured for four modulars, a structure between a permanent classroom and a portable. They are cheaper and can be set up more quickly, he said.

Woodson could not say when those facilities would be in place.

The preschool-to-5th-grade school has an enrollment of 960 students.

Police have opened an arson investigation in the fire, which caused an estimated $1.2 million damage to the structures and contents. Woodson said he is not an engineer but he is assuming that the whole wing will need to be rebuilt.

Maui Crime Stoppers pays cash rewards up to $1,000 for information leading to the arrest and indictment of people responsible for felony crimes, the recovery of stolen property or seizure of illegal drugs in felony cases or the capture of felony fugitives.

The school PTSA has set up a GoFundMe crowd-funding site to raise money for the school. Woodson said that the community has rallied to support the school. A large bulletin board on the cafeteria wall, which was torn off the night of the fire, was been put back up by volunteer carpenters.

Tyler Wright, the defending world and Maui Women’s Pro champion, competes in the first round Wednesday.

The F wing at Kahului Elementary School was damaged by fire Friday night. State Rep. Justin Woodson, who got a close look at the damage, said Wednesday that half the wing was gutted. Though not an engineer, he believes the entire wing will have to be rebuilt.

A eucalyptus tree fell on Piiholo Road during stormy weather at about 12:30 p.m. Monday. A county crew was called to remove the fallen tree, a common occurrence for Piiholo residents. MIMI BOYUM TACKABERRY photo