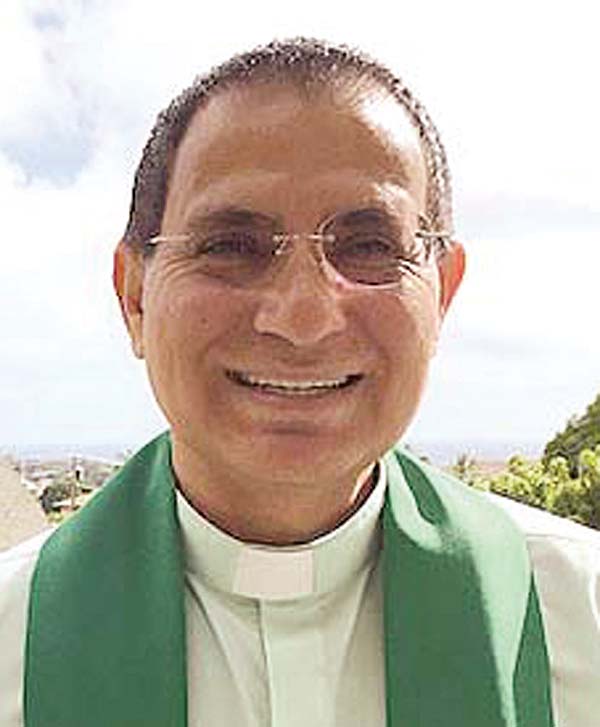 A trio of protesters were captured on video with one man saying “how wicked are you” over a bullhorn Sunday morning outside a Wailuku church before it installed its first openly gay pastor, church members said.

The speaker, however, said that it was not a “protest,” but rather he was preaching his beliefs before the church’s service.

The trio of men arrived about half an hour before the 9:30 a.m. service at Iao United Church of Christ, church secretary Lloyd Nebres said Wednesday. He said that the three men stood on West Vineyard Street above the church’s upper parking lot, and one man began speaking over the megaphone before police arrived.

“It’s just awful, and you can imagine the effect it had on the parishioners who were gathered here for church,” Nebres said. “It was completely unacceptable.”

The 122-year-old church was celebrating the installation of the Rev. Florentino “Tino” Cordova. About 100 churchgoers, pastors and kahu from UCC churches of the Tri-Isle Association of the Hawaii Conference were in attendance.

“People were quite startled, and some were quite upset that these folks would be saying these vicious things about pastor Tino,” Nebres said. “It was a bit of an amusement, though. Some were laughing at the absurdity of the whole thing.”

Ruben Israel of Los Angeles identified himself as the speaker and said Thursday that he was with two videographers. He could be heard on video posted by a churchgoer calling Cordova a “phony” who does not care about his “sheep.”

“Your pastor has lied to you,” Israel said. “This is your wake-up call people. What’s next? You’re going to allow child molesters to teach the children in the nursery? How wicked are you? A person isn’t born a homosexual.”

Israel defended his words and said he acted within the law and was not escorted away by police. He said he visited because he noticed a rainbow flag hanging above the church’s sign and wanted the church to “return to its roots.”

“I would liken that to driving by and seeing an ISIS (Islamic State) flag,” he said. “I find it somewhat appalling as a Christian to fly that flag knowing what God did to Sodom and Gomorrah.”

Israel is the founder of Bible Believers, an organization that emphasizes confrontational evangelism and home Bible studies, according to his website. The group has about 80 chapters nationwide and “many more worldwide,” he said.

Israel said he visits Maui’s chapter, which has a handful of people, as often as he can and has been part of other demonstrations on the island. The group has been seen preaching on Front Street in Lahaina, at Maui Friday events and at last month’s Maui Pride Festival at Trinity Episcopal Church By-the-Sea in Kihei.

Israel said that his group does not “pick on homosexuals” and is an “equal opportunity rebuker” of sin. He did not believe speaking over a megaphone is intimidating and only uses it when necessary.

“They just don’t like what’s being preached,” he said.

Cordova said that Israel was “spewing hateful things” toward his congregation for being open and affirming. He said that the church began flying the rainbow flag over the summer to publicize its members’ acceptance of homosexuality.

“This was a reopening of the wound because this is why they came to this church — to get away from this type of hatred,” he said. “Especially those who have been church hurt.”

Cordova said neighbors came out in support of the church and complained about the noise and message. He questioned whether the men were allowed to be there as well because there is no sidewalk above the parking lot.

Mateo Caballero, legal director of American Civil Liberties Union of Hawaii, said he could not find any county ordinances addressing noise levels of megaphones or rules concerning parades, marches or protests. He said a permit from the chief of police may be required for funerals or parades of 100 or more people.

Caballero added that sidewalks are traditional public forums and that, in areas where there are no sidewalks, people are generally allowed to be in the street. He said police still have the authority to regulate traffic safety, but if the demonstrators are permitting the flow of traffic they are within their rights.

“If they were on the side of the road and not blocking traffic and there were no sort of hazard, then my inclination is that it’s probably protected by the First Amendment,” he said.

Israel said he did not try to stop the service, vandalize the building or remove the rainbow flag. He said it is illegal to interrupt a religious meeting and could have been cited had he continued to preach.

Israel noted that he does not condone violence and always records his street preaching as evidence.

“We’re not Muslims,” he said. “Those are the ones who kill. We just stood by a sidewalk. We didn’t chop heads off or burn anything.”

Israel said he spent “a good portion” of Sunday feeding homeless and holding a Bible study at a park. He said that he is open to speaking with Cordova.

Cordova, who is originally from New Mexico, said he has experienced hate at churches on the Mainland where his building has been attacked, left with graffiti and had windows broken. He said his responses are not necessarily toward the vandals, but to the “pastors preaching hate on the pulpit.”

“We know this is not Maui and the aloha Maui is known for,” he said. “But if the citizens of the community remain complacent it just gives them more ammunition.”

Cordova offered bottled water to the men and said that the church’s message will always be with love, but it will come with a statement. He said messages like Israel’s may inspire more harmful demonstrations and recalled the recent tragic church shooting in Texas.

“We knew this eventually would happen, and my prayer is that he does not inspire someone else to do things even worse,” he said. “I don’t know if that is his goal, but I cannot take that chance with my congregation.”

Cordova said he plans to marry his partner, who will be moving from Los Angeles to Maui soon. He clarified, however, that being “open and affirming” does not mean the church is for gay people only.

“Everyone who comes through our doors will be accepted,” he said.