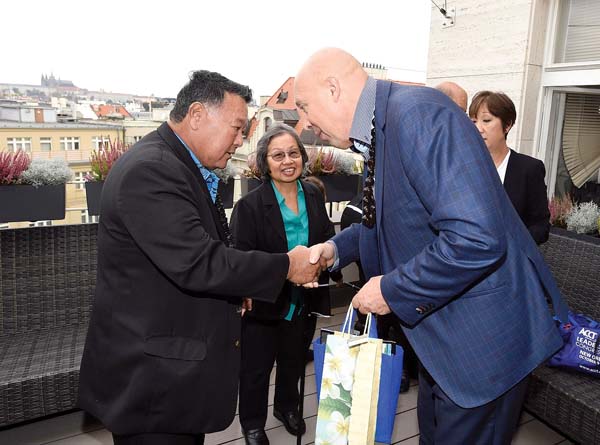 Mayor Alan Arakawa took a taxpayer-paid trip to Europe in October that included stops in the Czech Republic, Austria, Spain and the Netherlands and cost nearly $5,000.

The aim of the travel was to establish a “Friendship City” relationship between Maui County and a municipal district of the Czech capital of Prague, meet university officials and tour renewable energy sites in Europe, county and University of Hawaii Maui College officials said.

The trip to Europe was initiated by a meeting on Maui in October 2016 between Arakawa and Alan Krautstengl, now the former head of the Anglo-American University in Prague. Krautstengl was visiting the Valley Isle at the time to discuss an education program with University of Hawaii Maui College officials.

Hokoana was unable to travel to Europe because of commitments at home.

Antone said that the mayor’s trip was beneficial.

“It was a good trip to broaden our horizons here at the county and for the university,” he said. “Maui County and Maui College have always been great partners, and I think this was just another example of that.”

Ohigashi added that there is a desire by Maui County and the college to learn more about successful renewable energy systems in the countries Arakawa visited as well as creating partnerships to enhance sustainability education and student exchange information.

Antone said that the total cost for lodging for Arakawa was $2,763; airfare was $1,852; and train travel was $166. The cost does not include a per diem for meals, Antone said.

While Arakawa was away, Regan was acting mayor at the beginning and ending of the mayor’s trip, for a total of eight days; Walker was acting mayor in the middle of the trip for seven days, according to a letter Arakawa sent to county administration and council members.

During the trip, Arakawa established a “Friendship City” relationship with Prague 1 Municipal District and Mayor Oldrich Lomecky. A friendship city is the first stage of establishing a sister-city relationship.

Antone explained that when a more formal sister-city relationship is established, Maui County and the other city trade ideas and thoughts about infrastructure, tourism and other matters.

He said one example of how a sister-city relationship has helped Maui County is the establishment of the Sun Mei statue at Maui’s Sun Yat-sen Park in Keokea. Sun Mei, who lived in Kula, was the elder brother of Sun Yat-sen, the founder of modern China.

Antone said that Chinese visitors go to Keokea to see the statue.

Arakawa’s trip to Europe included trips to renewable energy sites. Among those was a trip to a cogeneration facility that uses waste heat to produce thermal energy at Madrid-Barajas Airport in Spain. The mayor also visited a water treatment plant, EDAR La Gavia, built by Degremont and owned by Canal de Isabel II de Madrid.

Another facility he visited was a waste-to-energy facility and visitor’s energy center by Wien Energie in Vienna, Austria.

Deborah Nakagawa, UH community colleges international education director, also went on the trip to Prague. She explained that, since late last year, the UH community colleges have developed a seven-campus relationship to send students to study and earn a baccalaureate degree at Anglo-American University in Prague.

“Mayor Arakawa has a strong commitment to position Maui County as a destination for and is most aware of the value of international education,” Nakagawa added. “I understand that Maui County has long-supported international education for our students in collaboration with UH Maui College. Providing these opportunities for our students broadens their outlook and better prepares them to contribute to Maui’s workforce and economy in a positive manner.”

Nakagawa said that Maui students are able to attend Anglo-American University. It is accredited by the Western Association of Schools and Colleges. But, unlike an exchange program, students from the Prague university don’t study at UH Maui College because it mainly offers associate degrees.

Nakagawa said that Maui students have shown interest in attending Anglo-American University since the program was advertised earlier this year.

Ohigashi said UH Maui College held a Study Abroad Fair with information on Anglo-American University in September and would conduct another study abroad promotion in the spring.

“We are excited by the many possibilities and hope to have Maui students experience this wonderful opportunity to study in Europe,” Ohigashi said.

Along with Arakawa, his wife, Ann, made the trip. Her travel expenses were paid by Arakawa’s personal funds, Antone said.

Tiffany Iida, Regan’s private secretary and Maui County Sister Cities Foundation chairwoman, traveled with the Arakawas. Her trip was paid for by the sister-cities organization, Antone said. Sister Cities International is a nonprofit citizen diplomacy network that creates and strengthens partnerships between U.S. and international communities, according to its website.

Iida’s daughter made the trip as well, but her expenses were covered by personal funds, Antone said.

Iida said that she took her daughter because “it was an amazing opportunity for her to be in another country, meet dignitaries and gain valuable experiences.”

The Maui contingent visited an orphanage in Prague where Iida’s daughter donated money that she earned by selling bead bracelets to family members and friends.

“I was so proud of her when she gave her gift to the director of the orphanage,” Iida said.

The gift-giving was highlighted in a story on the Prague 1 Municipal District website.