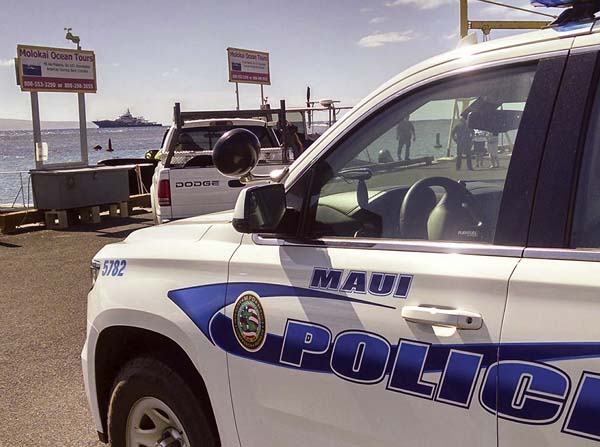 Molokai police respond to a group of residents protesting the arrival of a luxury yacht reportedly owned by Russian billionaire Yuri Milner on Friday morning at Kaunakakai Harbor. The owners decided not to come ashore after residents expressed concerns that Milner had not met with the community beforehand. WALTER RITTE photo

After protesters blocked a cruise ship from docking at Kaunakakai Harbor several years ago, residents set a protocol for luxury ships and large groups of visitors wanting to come to Molokai, activist Loretta Ritte of Hoolehua said.

“The protocol is to come to the community first so we know what’s going on,” Ritte explained.

So when a luxury yacht reportedly owned by Russian billionaire Yuri Milner made a surprise visit to the harbor Friday, Ritte and about a dozen Molokai residents protested from the wharf and convinced the yacht to turn away.

“It wasn’t any ill will toward anyone who was on the boat, but it was just that precedence for other boats who were thinking they could come to Molokai any time that they please,” Ritte said.

Alice McGillion, a spokeswoman for Milner, issued a statement saying “Yuri Milner does not own the boat Ulysses.”

The yacht owners had been planning to tour the island, Maui Police Department spokesman Lt. Gregg Okamoto said. While the state Department of Land and Natural Resources found no violations on the part of the yacht, the owners decided not to come ashore.

“The owners of the yacht were free to anchor and come ashore but made the decision to move on,” Okamoto said. “There was no incident on shore, and police were there just to observe while DLNR looked into the matter.”

Okamoto said the private yacht was stopped offshore at about 11 a.m. Friday. Neither police nor the state confirmed the yacht belonged to Milner, but residents who spoke with a representative at the wharf said Milner was the owner.

According to Forbes, the Russian tech investor has a net worth of $3.5 billion. He backed Facebook and Twitter early on through his venture fund, DST Global, and recently announced a $100 million space exploration project with Stephen Hawking. But Milner’s reported connections to Russian government-linked organizations also have plagued the 56-year-old with controversy.

Kalele Bookstore owner Teri Waros said a friend called late Thanksgiving night to ask if she could set up a cultural tour for a family. She said she was only given first names and did not hear Milner’s name until later. Unable to find a guide at the last minute, Waros hesitantly agreed to do the tour.

Ritte said she didn’t know who Milner was until after the protest. On Friday morning, Ritte got a call about the yacht coming in and drove down to take a look. One of those who joined her was Mana’e resident Mary Nalauhala Pale, who also was concerned about the visitors. She said over the years she’s seen seen people come to visit Molokai, buy land, build houses, raise property taxes and leave after a few years.

“I’ve seen so many changes because of the people that come over,” Pale said. “I’m not resentful against those people (on the yacht), but I feel we have to put our feet down sometimes and let them know where we’re coming from.”

The island has long been wary of overdevelopment and increasing tourism. In 2011, Molokai residents protested the arrival of a 145-foot passenger yacht piloted by American Safari Cruises. Residents were later able to come to a compromise with the company, allowing weekly cultural and historical tours of no more than 36 passengers, according to a 2011 Molokai Dispatch story.

“Every time a big ship or boat comes in, everybody gets all nervous about who are they, what are they up to,” said Walter Ritte, Loretta’s husband. “We’re very careful about not making the same mistakes that the other islands are making by losing control over development. . . . And that starts with you coming and taking your first steps on Molokai.”

Waros said she understands the concerns over visitors, especially with almost 56,000 acres of Molokai Ranch up for sale at $260 million. It’s a price tag “only a handful” of people could afford, “and to me someone who could afford a boat like that is probably in the handful,” Waros said.

Loretta Ritte said if Milner were willing to meet with the community in advance, “we would be willing to sit and talk.”

* Colleen Uechi can be reached at cuechi@mauinews.com. This story includes a clarification from the original post on Nov. 29.