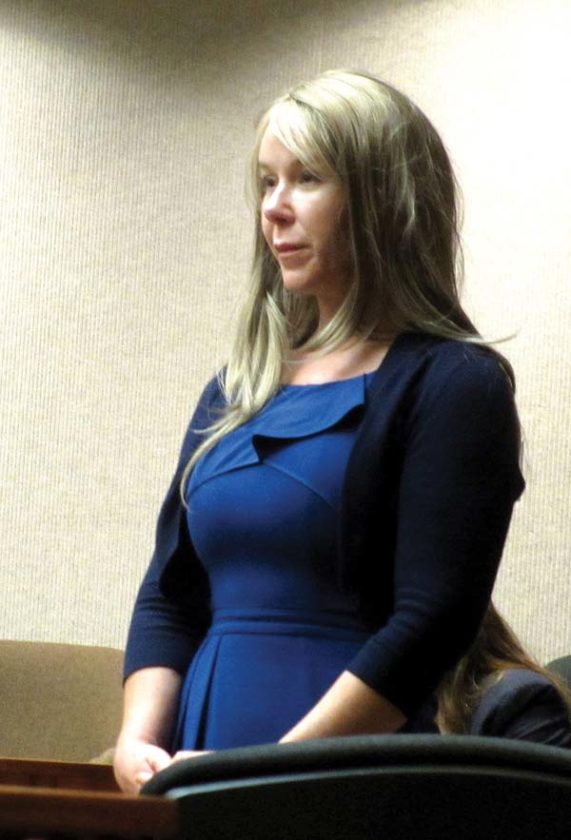 Alexandria Duval, who survived a crash near Hana that killed her twin sister in May 2016, appeared in 2nd Circuit Court on Tuesday. Her motion to have her indictment for second-degree murder dismissed was denied by Judge Peter Cahill. She requested a bench trial, which was granted. The Maui News / LILA FUJIMOTO photo

WAILUKU — A woman who survived a crash near Hana that killed her twin sister waived her right to a jury trial on a murder charge and will be tried by 2nd Circuit Judge Peter Cahill beginning Jan. 29.

Alexandria Duval, 39, has pleaded not guilty to second-degree murder in the death of her twin, Anastasia Duval. Anastasia Duval died at the scene of the May 29, 2016, crash on Hana Highway after the 2016 Ford Explorer driven by Alexandria Duval made a sharp turn over a short rock wall and plunged 200 feet down a cliff, according to police.

In court Tuesday, Duval agreed to waive her constitutional rights to be tried by a jury. She said she wanted the trial by Judge Cahill.

Duval made the decision after Cahill denied her request to have the murder charge dismissed.

Her attorney, Birney Bervar, had argued for dismissal with prejudice, saying a police detective and a police traffic investigator “misstated” evidence that was presented to the grand jury that indicted Duval.

The detective testified that an eyewitness reported seeing the passenger pulling the driver’s hair in Duval’s vehicle, which was stopped in the middle of the road at about 4 or 4:30 p.m. shortly before the crash.

When a grand juror asked if the eyewitness said the hair-pulling had stopped when the vehicle went over the cliff, the detective replied: “Yeah, correct. (The eyewitness) said that he saw that when they were stopped, and they were in front of him, yes.”

Bervar said that, according to a police report, the eyewitness didn’t tell police the passenger had stopped pulling the driver’s hair as the Ford Explorer accelerated past him.

“It was a crucial issue, I believe, in the grand jury indicting my client,” Bervar said.

Deputy Prosecutor Emlyn Higa said the testimony was incorrect, but that wasn’t enough to clear Duval.

“The more accurate statement would have been that (the eyewitness) didn’t see anything after the SUV passed him,” Higa said.

“The physical evidence shows it would have been physically impossible for her to have been pulling the driver’s hair hard,” he said, because the driver and passenger weren’t out of position in their seats when the crash occurred.

The driver survived because the steering wheel and airbag “cocooned her in the driver’s seat,” Higa said.

Bervar said the driver was holding onto the steering wheel when the passenger was thrown into the back seat when the vehicle hit a rock outcropping and flipped over.

“My client miraculously survived because she was in the front seat,” Bervar said.

He also said testimony by police traffic investigator Sgt. Lawrence Becraft was contradicted by an accident reconstruction expert hired by the defense.

Cahill denied the defense request to dismiss the case.

Referring to the detective’s testimony about what the eyewitness reported, Cahill said the detective “does appear to clear it up” in the second sentence of his answer.

“It doesn’t rise to the level where it’s clearly exculpatory,” Cahill said.

Duval, who was extradited from Albany, N.Y., to face the murder charge, was released from the Maui Community Correctional Center after $200,000 cash bail was posted for her.