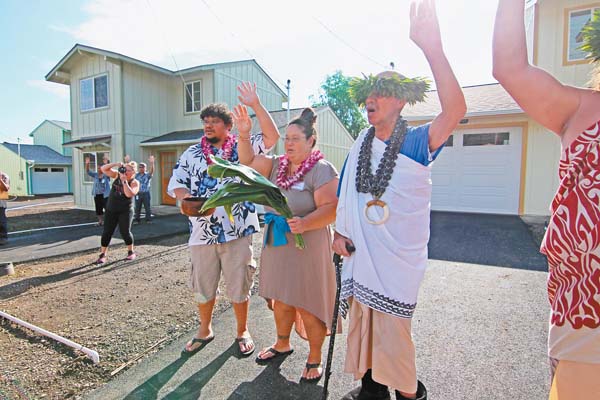 Joe Firsich (from left) and Wendi Kuon express their mahalo alongside kumu nui Kelii Taua in the driveway of their new home in Happy Valley on Monday morning. Nonprofit housing developer Lokahi Pacific held a blessing for its new Mokuhau Affordable Subdivision, a neighborhood of 16 single-family homes that are all going to first-time buyers. The Maui News / COLLEEN UECHI photo

She’s wanted to buy a house for about 20 years – and now the born-and-raised Maui woman and her two sons are finally getting a place of their own.

Nonprofit housing developer Lokahi Pacific held a blessing Monday for its new Mokuhau Affordable Subdivision, a cul-de-sac of 16 single-family homes that will go to first-time buyers like the Castroverdes, who’ve lived on Maui for years and didn’t think they could afford a place.

“My mother has been paying rent throughout her life,” 21-year-old Justice Castroverde-Moniz said. “I’ve seen the struggles, the many moves. . . . I don’t care how big or how small the house is. If it’s yours, it’s yours.”

Eight of the homes were ready for families Monday; the other eight will be completed in mid-February, said Susie Thieman, executive director of Lokahi Pacific. 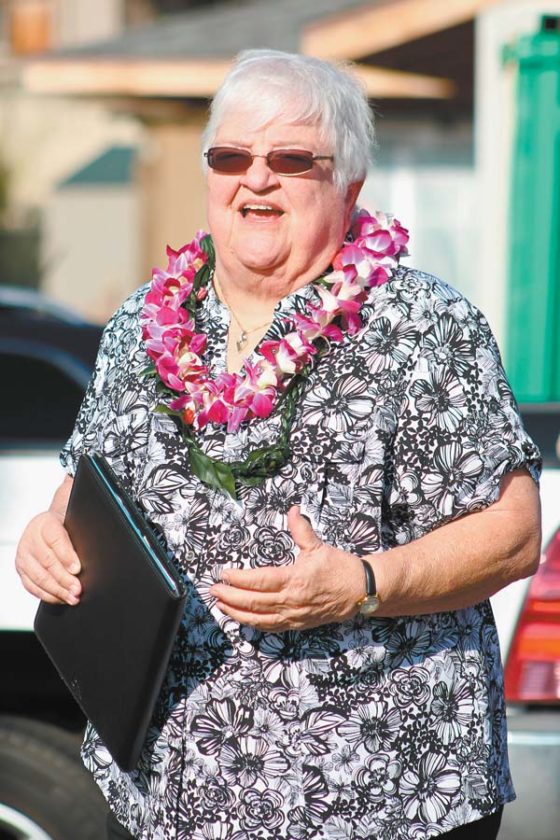 The two-story homes offer three bedrooms, two bathrooms and 1,400 square feet of living space. The homes sell for $380,000 each. Families had to be first-time homebuyers with a household income at 81 to 120 percent of the area median income. The homes have 25-year affordability agreements, meaning they can’t be rented out; families either have to live in them or sell them.

In November, the median price of a single-family home was $689,000 countywide and $600,000 in Wailuku, according to the Realtors Association of Maui.

Lokahi Pacific is a nonprofit housing and community development corporation that’s done affordable housing projects on Molokai, Lahaina and Kihei. The organization was looking for another project when it discovered the 1.9-acre property in Happy Valley was for sale.

“It had these old rundown shacks on it. It was just a mess,” Thieman said.

But the land held promise and already came with water and sewer systems for the existing buildings. Lokahi sought Maui County’s help. Pooling unused funds from previous projects, the county offered Lokahi a $2 million grant, which allowed the nonprofit to purchase the site in April 2014, hire consultants and start the dirt work. Lokahi then borrowed $5 million from Bank of Hawaii for the construction, which began in fall 2016. 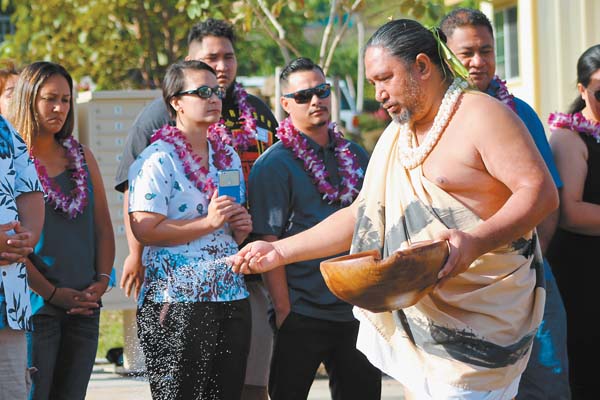 The shacks were demolished and new homes were built. The late architect Hans Riecke, who was part of Lokahi’s development team, originally suggested duplexes but later decided single-family homes would work better with the lot’s shape and be more valuable to families, Thieman said.

Lokahi put the word out shortly after purchasing the property and got 168 applications. The nonprofit worked with some families for three years, helping them save for a down payment and prepare to buy a home.

Wendi Kuon and Joe Firsich were the first to have their home blessed Monday. Owning a place “wasn’t really a reality until we found out we could qualify for this,” Firsich said. Both have been living on Maui for about a decade now. They rent a house in Wailuku but wanted to buy one for their 8-year-old daughter Makana.

“This is eventually going to be hers,” Firsich said. “It’s an investment in her future.”

Kuon said Happy Valley gets a bad rap, but she and Firsich were pleased with the neighborhood. 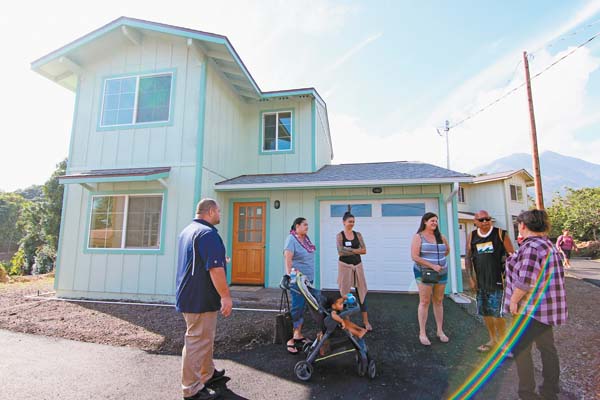 “You’re kind of leery of gentrification, but in some cases it’s good if you provide workforce housing for people who are actually living here,” Firsich said. “It’s tough. I see so many local families that are out on the streets because they can’t afford anything else.”

Castroverde said her home will be ready in February. She’s been a driver for Maui Economic Opportunity for 23 years and has been renting on Maui since she was 18 years old.

“When the market started really going up in rent, it was just so extreme,” Castroverde said. “What you’re paying in rent now you can pay in mortgage.”

Castroverde applied for the Mokuhau project three years ago. Having her own home means she won’t have to be separated from her dog or her sons, 25-year-old Kealii Sado and Castroverde-Moniz, who hopes to return home after graduating from the University of Hawaii at Hilo. She said one of the neighbors is already planning a Christmas block party and thinks it’s “going to be a real nice community.”

“It’s a relief,” Castroverde said. “I have a home for my family that we can be (in) together.”

After living on Oahu for eight years, Tiana Donato moved back home to Maui in June 2014.

“I started looking for a permanent place, and it was very expensive,” Donato said.

Donato, a sales representative for Johnson Brothers, a beverage distributor, has been renting the second story of her parents’ house in Wailuku. With housing prices so high, she had started to consider buying a condominium before she heard about the Mokuhau project. She turned in an application “as fast as I could.”

The new neighborhood is perfect for Donato, her fiance, Kiha Coelho, and their 1-year-old son, Serge. It’s five minutes away from Donato’s parents, who help take care of Serge.

“I never thought we would be able to afford a home,” Donato said.

Joe Firsich (from left) and Wendi Kuon express their mahalo alongside kumu nui Kelii Taua in the driveway of their new home in Happy Valley on Monday morning. Nonprofit housing developer Lokahi Pacific held a blessing for its new Mokuhau Affordable Subdivision, a neighborhood of 16 single-family homes that are all going to first-time buyers. The Maui News / COLLEEN UECHI photo

Justin Thomas started last year with victories at the Tournament of Champions and the Sony Open before winning his first major, the PGA Championship at Quail Hollow, and adding titles at the Dell Technologies Championship and CJ Cup. AP file photo

Justin Thomas poses with his trophies from the Tournament of Champions

Hundreds of sweet potato hornworms crossed Honoapiilani Highway on Wednesday afternoon, headed in the direction of the Maui Tropical Plantation. Many were squashed but some crossed the road. SHARI RABBETT photo