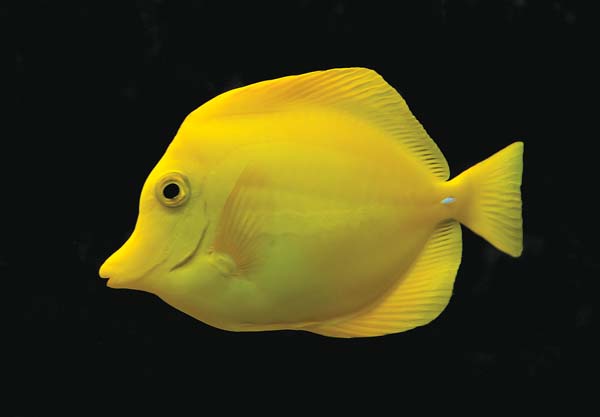 This yellow tang is just one of the colorful and popular fish sought in Hawaii waters by commercial aquarium fish collectors. Luc Viatour photo

The Maui Ocean Center hopes to have 20 percent of all its marine life on display acquired from aquaculture facilities — rather than the wild — by 2020, the center’s curator said last week.

“We believe this is the future,” John Gorman said during a Maui Nui Marine Resource Council meeting Thursday at the Pacific Whale Foundation office at the Ma’alaea Harbor Shops. “We’re talking with (institutions) to get this geared up so they’re more predominant and the industry standard rather than wild capture.”

The initiative coincides with a state Supreme Court ruling in September. It determined that the state Department of Land and Natural Resources’ practice of doling out permits for commercial aquarium fish collection must comply with the Hawaii Environmental Policy Act.

The following month, a Circuit Court judge ruled that existing commercial permits for use of fine mesh nets to catch aquatic life for aquarium purposes are illegal and invalid. The judge ordered the DLNR not to issue any new permits pending environmental review.

The department has maintained that existing aquarium fishing practices are “sustainable and environmentally sound,” according to its website. The DLNR also commented that it “appreciates that dozens of local businesses and families depend on the industry for their livelihoods.”

About 98 percent of fish in aquariums worldwide are caught in the wild, according to For the Fishes, a Hawaii nonprofit dedicated to protecting coral reef wildlife. Hawaii is the third-largest source of commercial fish, after Indonesia and the Philippines.

Less than 10 percent of the fish featured by Maui Ocean Center were bred in captivity, but the aquarium is actively working with Hawaii facilities and others to change that. Hawaii Pacific University’s Oceanic Institute on Oahu and the University of Hawaii at Hilo’s Pacific Aquaculture & Coastal Resources Center on the Big Island are two research centers that have found success raising fish as an alternative for aquariums.

The UH-Hilo center is raising flame wrasse while the institute is nurturing yellow tang. The center plans to receive a batch of yellow tang fish this week from Oceanic Institute that will eventually be placed in its own dedicated exhibit.

“The ultimate goal is to have people working on different species,” Gorman said. “Oceanic Institute has done a lot of work on yellow tang, and they’ve succeeded with that. With funding, they could go into a full-scale production and be producing thousands of these.”

Gorman said the flame wrasse raised by the center is a “very prized aquarium fish” and endemic to Hawaii. He said the Hilo facility, which he visited at the beginning of the month, is having success and is working collaboratively with the Maui Ocean Center.

The center aims to assist facilities by providing larvae as fish spawn in their facilities, such as its 50,000-gallon shallow reef tank. Fish typically spawn in the evening and during the summer, Gorman said.

“Fish like Nemo, they stick eggs on a rock surface,” he said of the iconic clown fish in Pixar’s movie “Finding Nemo.” “The male fertilizes it, and both parents guard it until it hatches. Most marine tropical fish come together in a congregation, and they just spawn. They rise to the surface and release eggs and sperm into the water. That’s all they do. There’s no parental care.”

The center’s tanks are built to send the spawn into the ocean, but in the future the fish could be captured to be raised at the center or other facilities. Raising fish in captivity, however, requires a delicate balance of food and larvae at a microscopic level.

“The key to doing this is to actually have live feed,” Gorman said. “I can have all this spawn, but if I don’t have something to feed them it’s useless. The live feed culture is pretty exact and pretty intense. You need to have live algae cultures or phytoplankton, and I’m not talking green lettuce. It looks like green or brown water. That’s what these cultures are, and it’s hard to keep them alive.

“You have to keep them sterile. If I do something wrong, they’ll crash on me.”

The cost to raise and sell fish in captivity is one of the biggest reasons aquariums prefer wild captures. Gorman estimated that aquaculture fish cost about 2 to 2-1/2 times more than wild fish.

Despite the costlier price, acquiring fish from aquaculture is preferred because it has no environmental impact, Gorman said. He added that cultured fish are guaranteed to do better in an aquarium because they were raised in one, and buyers do not know how a fish was caught in the wild.

Up to 90 percent of the 11 million tropical fish that enter the U.S. each year are caught illegally with cyanide, according to a 2008 report from the National Oceanic and Atmospheric Administration.

(In cyanide fishing, divers crush pellets of the poison, mix it with seawater in squirt bottles and drop down to coral formations. There, they release the cyanide mixture into crevices where fish lurk, stunning them and making it easy to scoop them up. Many fish are so weakened that they die in transit before reaching aquarium tanks. The poison kills nearby invertebrates, non-target fish and coral.)

Gorman said that although it’s more expensive to raise tropical fish in captivity, it’s more environmentally responsible and “it’s part of our mission.”

“In essence, this field is new,” he said. “It’s just beginning, but I think more and more institutions are going to be adopting acquisitions from aquaculture rather than the wild.”

There are 230 permitted commercial aquarium collectors, 10 of which are from Maui, DLNR spokeswoman Deborah Ward said in an email Wednesday. Since the Circuit Court ruling, the department’s Division of Aquatic Resources terminated its commercial aquarium permit and reprinted license cards with only the commercial marine license and distributed it to collectors.

The marine license allows collectors to sell aquatic life caught by other legal means besides fine-meshed nets, according to the department.

The division issued two special activities permits to collectors for Maui Ocean Center in 2010, which is up-to-date, Ward said.