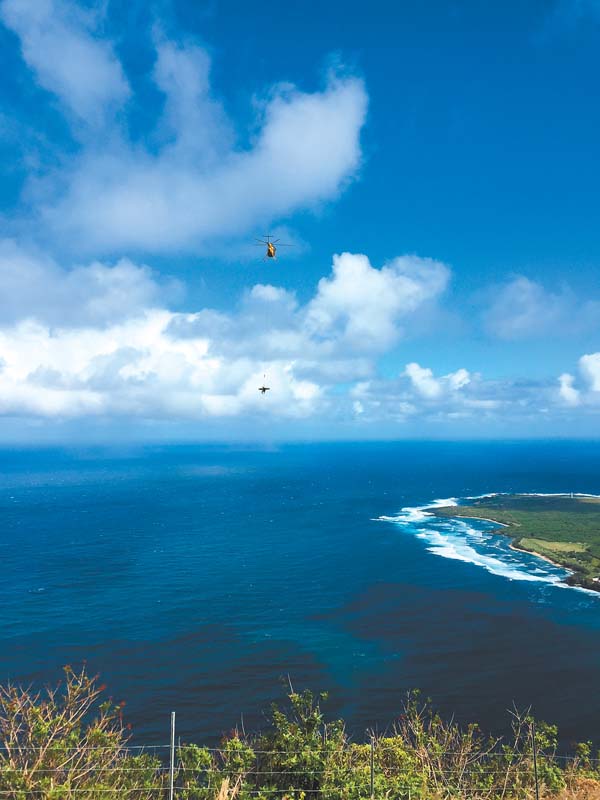 Two people on the Molokai Mule Ride were injured when they fell from their mules and had to be airlifted from the Kalaupapa Trail on Thursday morning, a fire official said.

A fire crew from Hoolehua responded to the 10:10 a.m. call that a man and a woman had fallen off their mules, said Fire Services Chief Edward Taomoto.

Firefighters reached the trailhead at 10:27 a.m. and found the injured parties on the 15th switchback, about 1.75 miles into the 3.2-mile trail. Three park rangers from Kalaupapa National Historical Park hiked up the trail and were first to arrive on the scene, Taomoto said.

A 54-year-old man from Novato, Calif., fell onto the trail, suffering a head injury and losing consciousness, after the mule that he was riding hit the animal in front of it, Taomoto said. The collision caused the woman riding the front animal to also fall off her mule. The 36-year-old Maunaloa resident, a tour employee, suffered torso injuries.

Both of the injured were treated for injuries and secured to be airlifted from the scene, Taomoto said. The victims were placed into a stretcher basket and lifted by rope suspended from the Maui Fire Department’s Air One helicopter, which transported them individually to a landing spot on Kalae Highway by 11:40 a.m.

Taomoto said that the fire crews offered their thanks to the National Park Service for its assistance and to paramedics and the Maui Police Department for a “well-coordinated rescue effort.”