According to UH researchers, oysters can filter 50 to 100 gallons of water a day 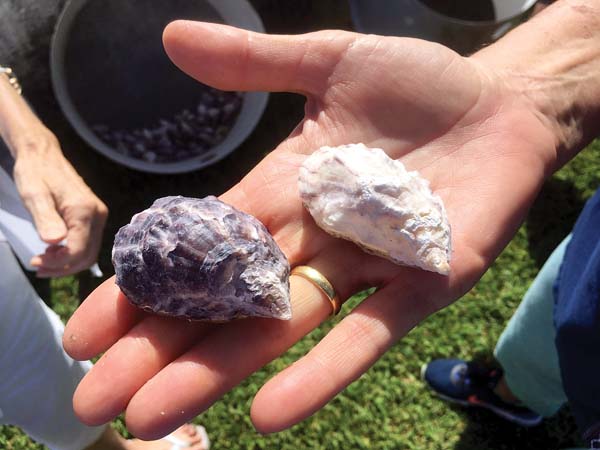 The council updated members and the public on its pilot program exploring the feasibility and practicality of using native Hawaiian or Pacific oysters to clean the Valley Isle’s ocean water. Maalaea would serve as the test site, which has seen a dramatic decrease in coral and increase in algae over the past decade, University of Hawaii researchers have said.

“They’re natural filters of water, and they can filter a lot of water,” Programs Manager Amy Hodges told the crowd of about 20 residents at an informational gathering at the Pacific Whale Foundation’s classroom in Ma’alaea Harbor Shops. “There are over 200 species of native bivalves that used to be in Hawaii’s waters. There’s still patches around but not like they used to be.

“This isn’t a new project we thought of, but it would be the first in Maui County.”

Oysters would be supplied by the University of Hawaii at Hilo’s Pacific Aquaculture and Coastal Resources Center, which raises oysters for commercial purposes, Hodges said. She and other members of the council visited the center on Dec. 1 to see the oysters, which would be used only for restoration testing — not human consumption or pearls. 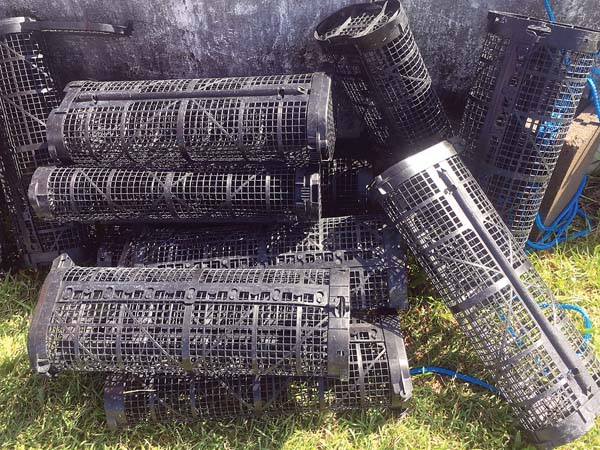 Oysters to help clean ocean water in a test project would be placed in small cages and hung underneath Maalaea Harbor’s docks for protection from boats and crabs. -- Photo courtesy of the Maui Nui Resource Council

Adult oysters can filter 50 to 100 gallons of water a day, sucking in sediment, nutrients and other pollutants, Hodges said. Each species has a particular strength with some better at volume filtering and others preferring specific items.

The Hilo facility would raise the oysters from the larval stage and transfer them to the Maui Ocean Center, where they would grow to adults, Hodges said. The oysters would then be placed in small cages and hung underneath the Maalaea Small Boat Harbor docks for protection from boats and crabs, which could “decimate the population.”

Maui has two species of native oysters: pearl oysters, which inspired the name of Pearl Harbor, and the native Hawaiian oyster. Native oysters are only about a couple inches large — much smaller than the Pacific ones.

For every 10 Pacific oysters, roughly a hundred native ones would be needed to do the same job, Hodges said.

“That’s OK if the natives are able to because that’s what we obviously want to promote,” she said. “But it’s just a matter of what can survive the best and what can get the job done.” 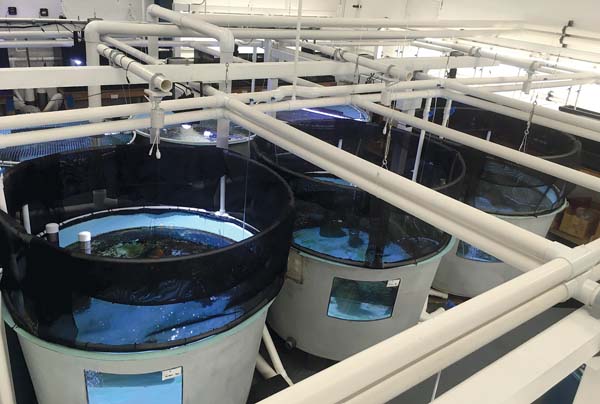 The Pacific oysters would be triploids, or have three sets of chromosomes, so they could not reproduce and disrupt the environment, Hodges said. The non-native oysters are not considered invasive, though, and were first introduced in 1927.

To calculate the number of oysters needed to clean the harbor, the council would have to start with the current water quality level and work backward to its ideal level. UH-Manoa researchers published a study last year that found Maalaea waters contained nearly 100 times more nitrogen than other parts of the island due to fertilizer-enriched submarine groundwater discharge.

“Say you get a million oyster larva; you would get 125,000 juveniles out of that and only a percentage of those would make it to restoration size,” she said. “You’re talking about a really large number to actually impact water quality. You would need hundreds of thousands of oysters to get the water to where we want it to be.”

Maui Ocean Center Curator John Gorman said the harbor has been a concern for years, particularly during heavy rains.

“This harbor turns chocolate brown and the outside waters, too,” Gorman said. “And the problem with that is it’s a legacy thing. That is going to stay there for a long period of time because sediments fall down to the bottom and every time you get another event like a south swell or even a boat backing out it will turn up.”

Part of the issue is the formation of the break walls, which is causing low circulation of water in the harbor, Hodges said. She said the water “doesn’t flush out very well” so pollutants continue to build.

Hodges said a board member doing a similar project with oysters at Kaneohe Bay in conjunction with the Marine Corps on Oahu originally pitched the idea. She added that many other states around the country have seen success using natural filter feeders.

It would take at least one to two years for the council to grow a suitable population and to study the feasibility of the project, Hodges said. The group would then need to obtain permits from the state Department of Land and Natural Resources to place the oysters in the harbor.

• Oysters. The Maui Nui Marine Resource Council is exploring the feasibility and practicality of using native Hawaiian or Pacific oysters to clean Maalaea Harbor waters. The story published Sunday on Page A1 and continued on Page A10 incorrectly identified the council.

* The Maui News wants to promptly correct errors in fact or make clarifications on information appearing in the newspaper. To report an error or clarification, please call 242-6343 or send email to citydesk@mauinews.com.