Council wants attorneys to sign off on measure first 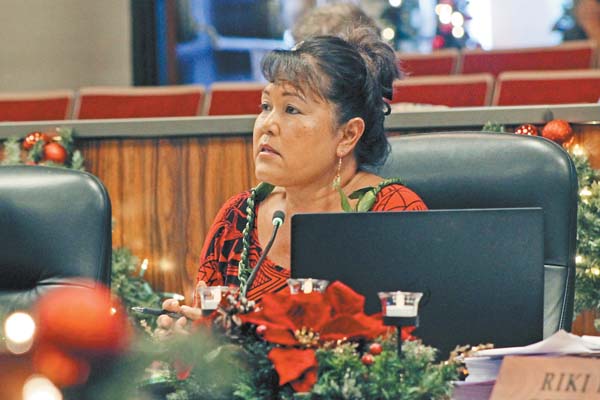 WAILUKU — There’s plenty of support for a proposed ban on certain sunscreens, but without a signature from county attorneys, some council members aren’t ready to make the final call just yet.

Members voted Monday to indefinitely postpone a decision on a bill that would prohibit the sale and use of sunscreens containing oxybenzone and octinoxate, chemicals that experts at a recent committee meeting said are toxic to coral reefs.

“At this point if that’s what makes everybody feel comfortable with (the bill), then I’m for a little bit of postponement,” said Council Member Elle Cochran, who introduced the measure. “But my office is going to work very hard to make sure we expedite it.”

On Nov. 13, the bill passed out of the Infrastructure and Environmental Management Committee that Cochran chairs. Two experts on coral reefs and toxicology said that the chemicals can lower reef tolerance to bleaching and interrupt the development of marine life. They said tests along Maui’s shores have revealed more than enough oxybenzone and octinoxate to prove toxic to reefs.

Multiple council members said Monday they thought the scientific evidence was strong, but they wanted to make the bill as legally sound as possible.

“I’m in support of this bill. I’m in support of making sure these coral reefs prosper,” said Council Member Don Guzman, who is also an attorney. “I would feel more comfortable if we take the time to really present the evidence, build the right foundation and move forward with it just like we did with the styrene bill.”

In May, the council passed a ban on the use of polystyrene containers popular with plate lunch places, effective Dec. 31, 2018.

In his five years in office, Guzman said he’s never voted for a bill that didn’t have the approval of Corporation Counsel, the attorneys that advise the county. Council members can pass a bill without Corporation Counsel’s signature. But if they do so and someone sues the county, the county might have to pay outside attorneys using money from the general fund instead of its self insurance, Guzman explained.

The legal issues start with the fact that the state is in charge of nearshore waters, which means the county may not have the authority to regulate ocean-related activities, Deputy Corporation Counsel Richelle Thompson has explained. She’s also pointed out the federal commerce clause, which prevents states from interfering with interstate commerce. In addition, the U.S. Food and Drug Administration has approved both oxybenzone and octinoxate for use in sunscreens.

However, Cochran said she consulted with outside counsel, attorney Lance Collins, who believes the county has every right to pass the bill. Collins wrote to the council that the proposed bill applies equally to sunscreens manufactured both within and outside of Hawaii, “and therefore does not offend the commerce clause.” He also argued that state law doesn’t trump county law in this case because neither the state Department of Health nor the Department of Land and Natural Resources regulate the sale of consumer products.

“My big thing is that there’s clear science and clear case law that could really work in our favor,” Cochran said. “I’ve gotten legal, outside, unofficial explanation as to (why) this would definitely hold up. That’s where my frustration comes from. I feel that they’ve (Corporation Counsel) been really bucking this.”

Council members asked Thompson what they would have to do to get Corporation Counsel’s signature. She said there are alternatives, such as funding education for residents and visitors, or requiring companies that sell sunscreen on Maui to register with the county. However, council members liked the original bill, which has drawn widespread community support.

“We can continue to go and do education, but why are we educating people on something that we know is bad if we’re unwilling to take action about it?” Council Member Kelly King asked.

King also pointed out that the county has banned tobacco from its beaches. But in that case, state law specifically gave counties authority to regulate smoking, Thompson said.

The council thought it couldn’t hurt to allow more time to research, listen to more experts and come up with more arguments. Members pointed out that the ban on polystyrene took four months to pass and involved presentations from both sides of the issue.

Chairman Mike White liked the sunscreen bill “the way it is” but wanted to be “as sure as we were with the polystyrene.”

“I feel there’s enough scientific evidence presented to move forward, but at the same time, I think it’s appropriate for us to take another swing at it and make sure we allow people with other perspectives a chance to voice their opinions,” he said.

Atay added that Native Hawaiian gatherers “don’t need no scientific data to tell them that the limu is dying, that the fish is dying.”

“I, too, would want to see the support of this bill’s end result,” Atay said. “But at the same time, I also support member Guzman’s position of we want to make a bill that’s defensible.”