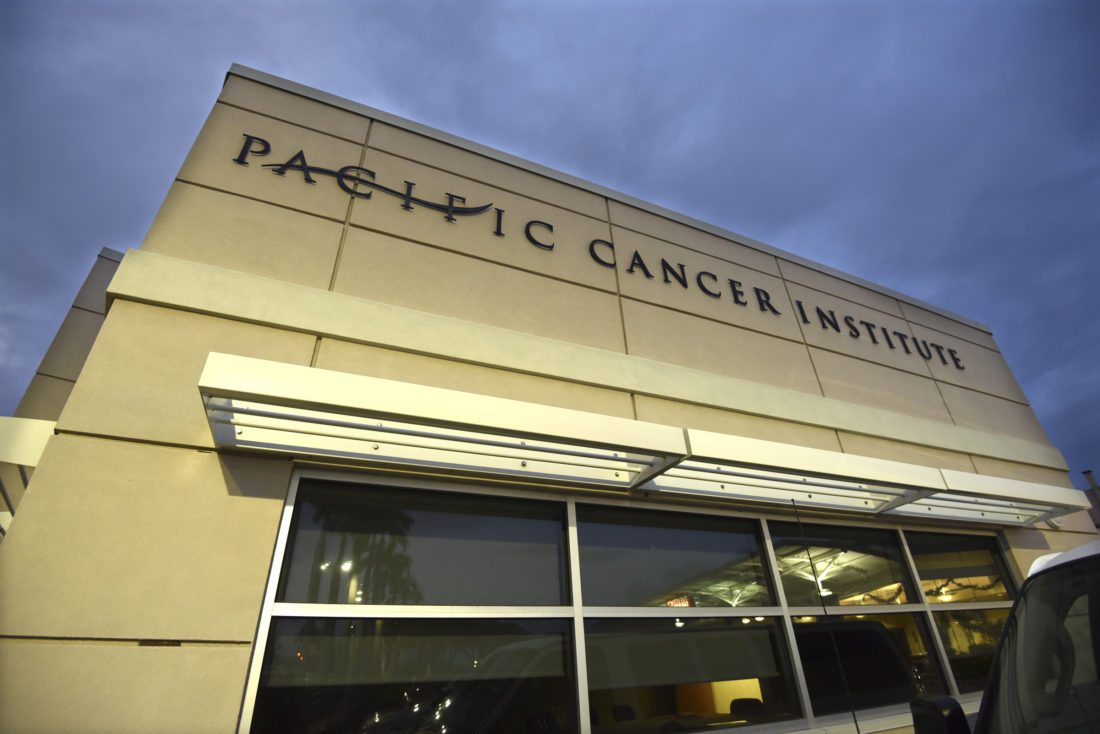 The Pacific Cancer Institute, shown here in a photo taken Dec. 12, and the Hawaii Health Systems Corp. are engaged in a legal battle over the institute’s lease agreement. The institute is the only facility providing radiation therapy on the island. • The Maui News / MATTHEW THAYER photo

Dr. Benjamin Falit, who made his comments in a Viewpoint to be published Sunday in The Maui News, also emphasized that his facility is not in jeopardy of closing Feb. 1 — as claimed by the quasi-public agency that runs Neighbor Islands and rural Oahu public hospitals in a Dec. 12 news release. The HHSC also filed a lawsuit against the institute over the leases on that day.

“If the story ended as a landlord-tenant legal dispute, I would likely not be writing this editorial,” institute Medical Director Dr. Benjamin Falit said. “However, on the same day HHSC filed the lawsuit, it also published two grossly misleading press releases designed to scare Maui patients and physicians.”

The institute, which operates on 8,000 square feet on the emergency room side of the hospital, leases land owned by the HHSC, Falit said. Both parties own and share space in the building.

The institute is the only provider of cancer radiation therapy in Maui County. Before it opened in 1993, cancer patients needed to fly off-island for treatment.

The HHSC filed the lawsuit alleging that its two land leases with the institute, which were signed by both parties in 2005 and 2012, were illegal and should be voided to comply with federal law. The HHSC alleged that new leases were necessary because the current ones violate two federal laws.

In its lawsuit, HHSC claimed that it had reached an impasse on its 2012 ground lease negotiations that spanned over a year. The leases have an initial 25-year term, with an option to extend for up to 15 years.

Falit explained that HHSC raised concerns with the institute in 2015 over certain utilities and other shared services that had not been fairly included in its monthly rent. The parties agreed to a settlement on those issues last year.

However, negotiations “broke down” when HHSC demanded new terms that were not in the institute’s existing leases and would have made it “significantly easier” for the institute to be evicted in the future, Falit said.

“We believe our current lease, along with the methodology for payment of utilities and services established by the 2016 settlement agreement, is legally binding,” he said. “Nonetheless, we will gladly make higher payments to HHSC if a court or governmental agency with proper authority determines we need to do so.”

The HHSC said that the alleged violations of federal law in the leases were discovered when HHSC officials were reviewing contracts in preparation for the transfer of public hospitals in Maui County to Maui Health System, a Kaiser company.

The HHSC said it “self-reported” the violations to the U.S. Office of the Inspector General. That office is responsible for oversight of federal laws and may assess penalties against HHSC as a result of the noncompliant lease arrangement, HHSC said.

In its news releases, the HHSC claimed the federal office “informed” them that it must execute compliant leases with the cancer institute or terminate the current leases by Jan. 31. Falit said local media outlets published the listed deadline, “ostensibly set by federal regulators, as fact.”

“My cancer patients were devastated,” he wrote. “Many of them will be receiving radiation around the time of the purported deadline. Many of them are elderly, ill, wheelchair-bound, oxygen-dependent and/or impoverished, making it impossible for them to travel to another island for treatment.”

Falit said he spent the next two days fielding phone calls from concerned patients and family members. He assured them that the institute would not be shutting down by Feb. 1 “or any point in the future.”

Falit said HHSC has been “dishonest” about the deadline and did not believe the federal office, or any other governmental agency, has determined anything illegal about the leases.

While “deeply disturbed” by the news releases, Falit said he was assured by HHSC CEO Dr. Linda Rosen that negotiations would continue in good faith.

“We are committed to paying fair market value for these services,” Falit said. “However, we do not believe that HHSC should have the right to force new terms into the lease that make it easier for HHSC to take away our ability to operate the cancer center.”

Rosen confirmed via email Thursday that the state agency is ready to restart negotiations. A spokeswoman with Maui Health System, which took over operations of Maui Memorial Medical Center and Kula and Lanai Community hospitals in July, did not provide comment Thursday.

“HHSC will continue acting in good faith and taking all necessary steps to comply with federal law,” Rosen said in a statement. “We self-reported to regulators the violations in the lease arrangement with PCI, and we have taken steps to end the noncompliant arrangement. While we were disappointed by much of what PCI had to say about the situation, we are encouraged that PCI wants to return to the negotiating table.

“We welcome that outreach whenever PCI makes it, and we look forward to achieving the end goal of ensuring continued, uninterrupted radiation therapy services for patients in Maui County.”