Running for the top spot

Hanabusa says her ‘political journey leads me to this point’ 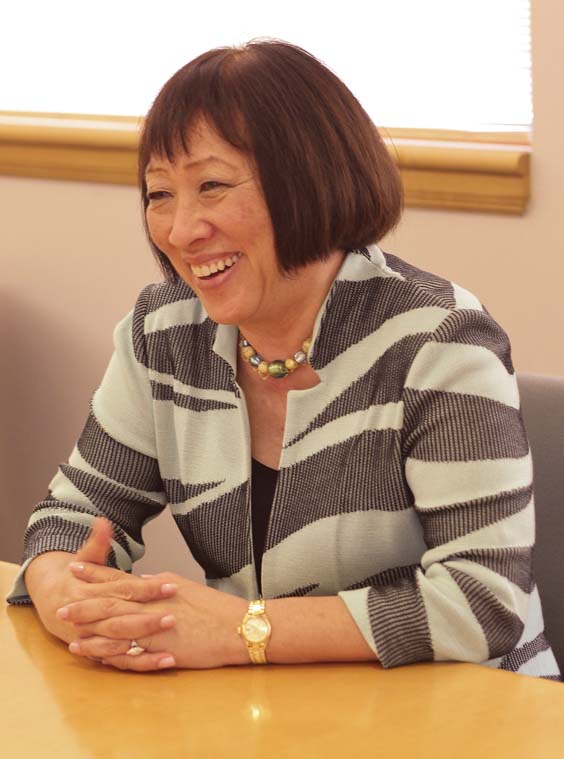 WAILUKU — U.S. Rep. Colleen Hanabusa’s roots go back to the sugar cane fields of Waianae. Before her grandparents got married, they worked on the Waianae Sugar Plantation, in the town where Hanabusa later grew up.

That’s why she’s interested in the future of 36,000 acres of former Hawaiian Commercial & Sugar Co. cane fields, an issue she plans to keep an eye on if elected governor.

“With the closing of HC&S, I’m very concerned about what will happen to the land, because I feel that all of that will define Maui for the future,” Hanabusa said during an interview last week at The Maui News.

The congresswoman officially launched her campaign for governor Monday, taking on incumbent fellow Democrat Gov. David Ige. Hanabusa said that, despite being from the same party that dominates Hawaii politics, Democrats “are not all the same, and we do afford people the various choices as to who they could have for leadership.” She’s offered herself as an alternative to the “rudderless” position she sees Hawaii in.

Hanabusa holds the 1st Congressional District seat that represents urban Oahu in the U.S. House of Representatives. She’s an attorney who became the state Legislature’s first female Senate president and later went on to serve in the U.S. House. 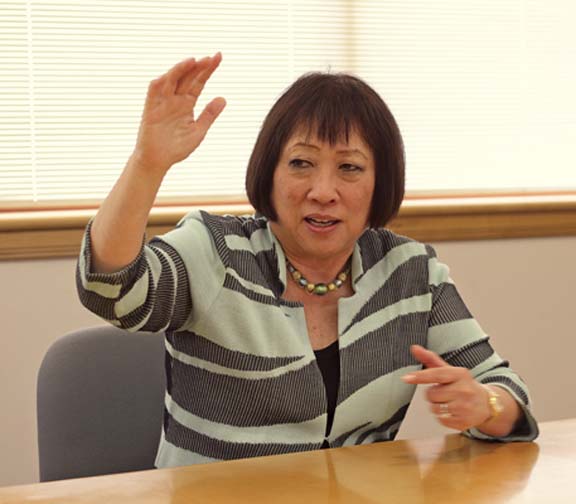 Hanabusa says she believes the state is “drifting” and “rudderless.” She said she wants to restore hope to voters. -- The Maui News / COLLEEN UECHI photo

“Some people may not believe this, but . . . I feel like my whole political journey leads me to this point,” Hanabusa said. “My objective has always been how to best serve the people of the state of Hawaii. And I feel the office of the governor is the one way that I can apply everything that I’ve learned.”

Hanabusa was serving in the state Senate when Molokai Ranch shut down in 2008, laying off more than 120 employees. Now part of the industry that took its place is leaving Molokai too, with the announcement that Mycogen Seeds would shut down in the spring, costing close to 100 jobs.

“I don’t know what the industry will be (next),” Hanabusa said. “I don’t think it’s as simple as saying you should have them do a certain thing, because Molokai is definitely a place where you have to engage in consultation with the residents.”

Hanabusa said what she doesn’t want to see is people having to travel to Maui for work every day. Each island “has to be sustainable” in terms of jobs, she said. Molokai consistently has the state’s highest unemployment rate, at 5.2 percent as of November. The state as a whole hit a record low 2 percent jobless rate in the same month. Hanabusa said she’s not sure what type of business could help fill the job void, and while tourism is always “viable,” it may not be what people want on Molokai.

“I really believe that in order to properly do this we need to have a handle on what the demand is, and we must plan to the demand instead of trying to guess what we think would sell,” Hanabusa said. “In order to address this real puka in the economic structure of Molokai now, we need to have something that will come in and make sure people are trained for that job.”

Similarly, Hanabusa is interested to see what will emerge from Maui’s former sugar cane fields.

Hanabusa said the state doesn’t take full advantage of the University of Hawaii’s College of Tropical Agriculture and Human Resources “and the research that they do.” She said the college could play a big role in helping to come up with new industries.

“I think the main problem the government has had is that we all pay agriculture a lot of lip service, but we’re not really paying enough attention to agriculture and the concepts of being sustainable, and what it will take to get there,” Hanabusa said. “The viability of whatever we produce has got to be there before we ask farmers to take it on.”

A place to stay

Hanabusa doesn’t mind keeping a controversial idea on the table. Take safe zones, for example — government-sanctioned encampments for homeless people to sleep in, use the restroom and find social services. Last year, Hawaii County experimented with a safe zone, and Mayor Alan Arakawa has expressed interest in creating one on Maui. But Ige has said the concept would be the opposite of safe and could put federal housing funds at risk.

Hanabusa said safe zones can be “a critical component” by addressing the immediate needs of the homeless before helping them find more permanent shelter.

A few years ago, a proposal similar to safe zones ran up against opposition on Maui. The Kauaula Campgrounds project called for providing campsites on 2 acres in Lahaina for both commercial campers and transients, who would have to pass screening to get a space and would only be able to stay for a fixed term. But residents were concerned the camp would be unsafe, discourage tourism and reduce property values.

Hanabusa said that, in Waianae, many of homeless people live in the kiawe brush where it’s easy for some to forget they exist. But hoping “that they would just go away doesn’t address the fundamental issues,” she said.

“Nobody wants it in their backyard,” Hanabusa said. “But the problem is that it’s going to be somewhere. So if we work together and find some place that maybe people can all accept, then that’s a resolution.”

Hanabusa also is concerned about housing and on “how do we bring the young people home?” She said it comes down to understanding what type of housing the next generation envisions.

“We cannot continue, in my opinion, to build single-family houses, and though a lot of people do aspire to that, I don’t believe everyone does,” Hanabusa said.

“We have to start asking the question as to, ‘(Does) everyone want a house with the yard or are people looking at a different type of living?'”

Maybe the focus should shift from single-family homes to smaller, affordable units where people could save up for a different home in the future, Hanabusa said. That’s where she says the private sector comes in, with the resources to draw up innovative housing alternatives and figure out what sells.

“The first thing government’s going to have to do is entice that,” she said. “And I think the one thing government does have is land. And then, of course, we have all the regulations, but government’s got to, like I said, get out of the way and look into what kind of a partnership we can participate in to get to the end goal quickly.”

Hanabusa has heard the arguments over the transient accommodations tax — also known as the hotel room tax — which the counties have fought to increase their share of. In September, Ige signed a bill that would fund the Honolulu rail while raising the TAT statewide to 10.25 percent through 2030. Lawmakers also raised the amount of TAT the counties receive from $93 million to $103 million. That meant Maui County’s share of the tax revenues went up from $21.2 million to $23.5 million.

But Maui County officials, including council Chairman Mike White, have long complained that the state hoards much of the counties’ share of the TAT. In fiscal year 2017, TAT collections statewide totaled $508.4 million, according to the Taxation Department. The counties took home less than a quarter, a far cry from the days when they once received 95 percent.

Hanabusa said she agrees “in principle” with counties being able to keep what they generate. However, she’s concerned it’s a slippery slope.

“The question becomes, what is the Legislature’s idea of the trade-off?” Hanabusa said. “In other words, if they give you more TAT, then what else would they give you less of?”

“So it’s got to be a better argument than simply ‘what we generate,'” Hanabusa said.

Otherwise the state Legislature might argue, “OK, we give you all the TAT that you generate. But you know what? We’re not going to give you parks, because you should generate . . . your own park money,” Hanabusa said. “That would be an unintended consequence.”