A Maui Bus turns off Honoapiilani Highway and onto Keawe Street in Lahaina last month. Some residents and business operators are concerned about increased traffic congestion at the highway’s Keawe Street intersection, where improvements are planned. • The Maui News / MATTHEW THAYER photo

The state Department of Transportation on Thursday took issue with West Maui Rep. Angus McKelvey’s criticisms of the department’s plans for the newest phase of the Lahaina bypass and the adjustments made at the northern end of the bypass as traffic flows to Honoapiilani Highway at Keawe Street.

In a letter to Gov. David Ige on Monday, McKelvey asked Ige to call a “timeout” on work on the bypass to prevent a “detrimentally profound and negative impact” on West Maui traffic. He complained about a “last-minute” proposal to remove an existing northbound lane on Honoapiilani Highway at Keawe Street and the lack of comment from the public on the changes.

In responding to “inaccurate statements” by McKelvey, Ed Sniffen, deputy director of the highways division, countered that the 2.6-mile extension of the bypass from Hokiokio Place to “cut mountain” near Olowalu “protects an important portion of the coastal highway to West Maui by moving it inland while offering another route for those headed towards Kaanapali.”

Sniffen said the opening of the phase “will increase efficiency of the two routes in the area as those that want to go from Olowalu to Keawe Street will no longer have to go through beach and neighborhood traffic.”

“Those wanting to go into Lahaina town or to access the beach will have several options to do so from the bypass,” he said. 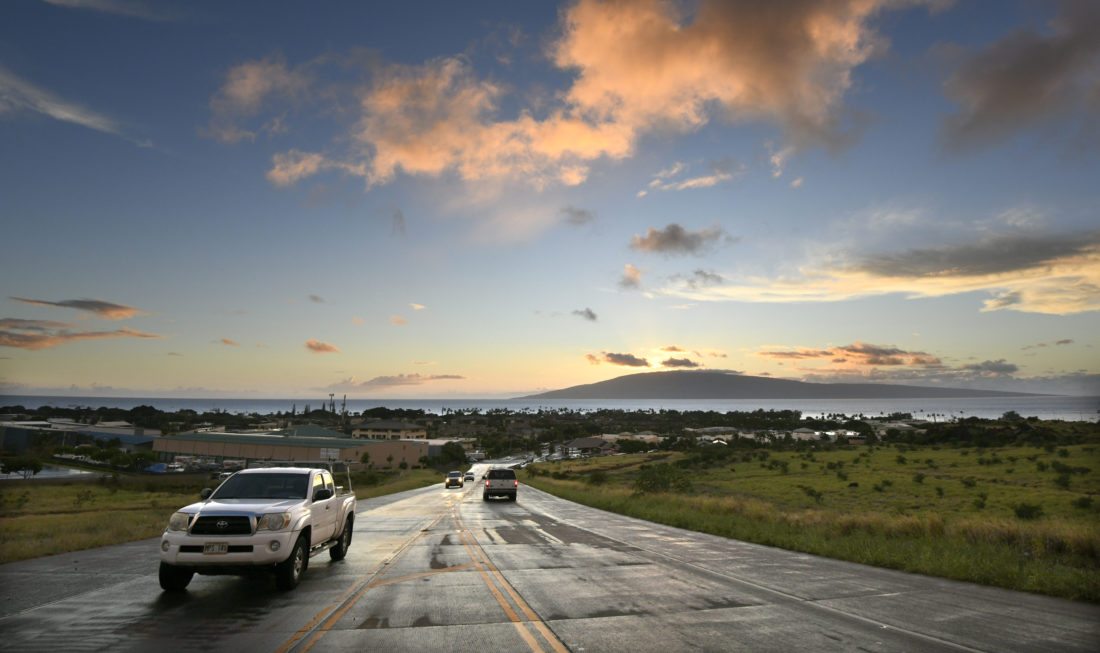 Motorists make their way up and down the northern portion of the Lahaina bypass last month as the sun sets over the island of Lanai. This bypass segment is mauka of the Lahaina Gateway and the intersection of Keawe Street and Honoapiilani Highway. • The Maui News / MATTHEW THAYER photo

With the $38.7 million project nearing completion, possibly in March, the department projects that 70 percent of cars will utilize the bypass from Olowalu to Keawe Street by 2020, the news release said.

In anticipation of the increased traffic, the department said it is planning modifications at the intersection of Honoapiilani Highway and Keawe Street, “which serves as the interim northern terminus” of the bypass.

McKelvey said in his letter to Ige that this will force vehicles, unable to merge onto the only through lane on Honoapiilani Highway, to have to “loop around the entire town of Lahaina to remerge.”

The department responded by saying that drivers headed toward Honoapiilani Highway at the Keawe Street intersection who are unable to access the one through lane “can turn around on one of Keawe’s side streets or re-enter Honoapiilani through one of the southern connector roads, such as Lahainaluna Road, Hokiokio Place, Kai Hele Ku Street or the south connector road.”

There were discussions with the community on the plans for the Keawe Street intersection, the department said. Sniffen and other transportation officials met with the West Maui Taxpayers Association in early December to discuss concerns and potential solutions. The department agreed to work with the community on adjustments after the intersection and the new phase of the bypass become operational.

“This was in addition to the public meetings held over the decades since the Lahaina bypass was first conceived of,” the department news release said. “The latest of these meetings were held in 2007 and 2015.”

Joe Pluta, WMTA vice president/treasurer, said department officials at that meeting in early December were “very cordial and very nice, (but) just because we had this meeting it does not solve the problem.”

None of their suggestions were adopted, he said. This included turning the bypass at Keawe Street into northbound-only and having southbound traffic stay on Honoapiilani Highway, which would require no changes at the Keawe Street intersection, he said.

Pluta said that once the department has its designs and funding “nothing is going to change.”

“It’s lip service,” he said. “It’s self-serving to say ‘we met with them.’ Nothing changed.”

He was particularly “disgusted” by the department’s comment that vehicles unable to merge into the single through lane would be able to turn around on Keawe Street side streets. It is difficult to cross Keawe Street from the Lahaina Gateway to get to the Walgreens with vehicles speeding down off the bypass, he said.

“That is not a viable option,” Pluta said. “If they lived in West Maui, they wouldn’t have made that statement.”

He said this is a decision being made on Oahu and that the WMTA pushed for construction of the Lahaina-to-Kaanapali phase before the Olowalu-to-Hokiokio Place phase. That would have made the highway a true “bypass” of Lahaina town from Puamana to Kaanapali, he said.

However, department officials were trying to be “clever” by building the southern phase first to help resolve erosion issues along Honoapiilani Highway, Pluta said.

A department spokeswoman did not offer much hope for the construction of the Keawe Street-to-Kaanapali phase. Department spokeswoman Shelly Kunishige said that the phase would be built “if funding becomes available” but that current funds are being prioritized for safety and road repairs.

“In other words, it doesn’t make sense to build new roads if we can’t maintain the roads we have,” she said.

There is a lot of opposition to the Keawe Street plan, and a department official attending the WMTA meeting Tuesday “was getting an earful from people who are very upset and angry,” Pluta said.

Keawe Street was not designed to handle the current traffic, let alone an increase in vehicles, he said. The department’s plan exposes the state to liability from accidents and fatalities.

“The people of Maui . . . are not signing off on this,” Pluta said. “This was a decision not made by the people.”

* Lee Imada can be reached at eeimada@mauinews.com

Recent letter about President Trump was a warning to all

COVID-19 overreaction can be worse than virus