Use of Hawaiian in court leads to warrant

Haleakala telescope protester, refuses to identify himself in English 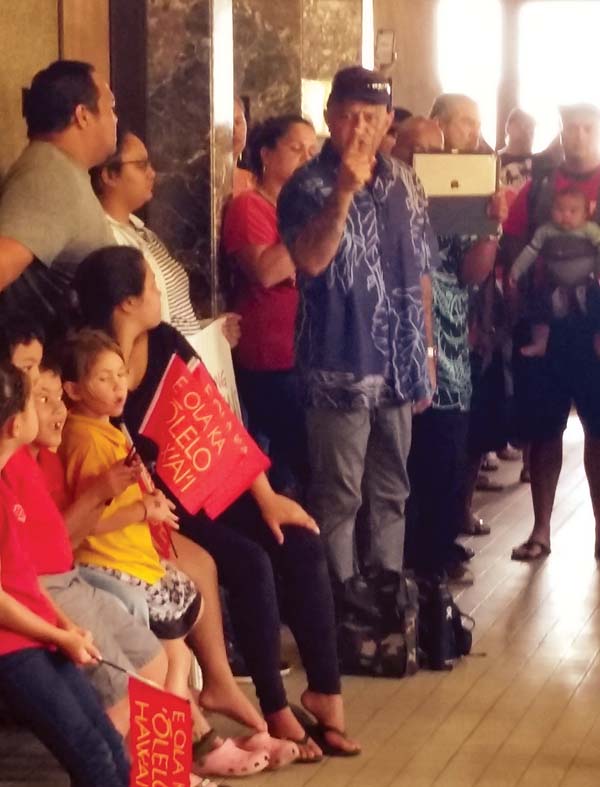 Samuel Kaleikoa Kaeo (center) speaks with supporters gathered in a courthouse hallway after a bench warrant was issued in his case Wednesday. Kaeo was set to go on trial in Wailuku District Court after being arrested last year while trying to block a convoy carrying telescope equipment to the summit of Haleakala. The Maui News / LILA FUJIMOTO photo

WAILUKU — A bench warrant was issued for a Haleakala telescope protester who spoke only in the Hawaiian language when he appeared in court Wednesday.

A trial had been set for Samuel Kaleikoa Kaeo, whose case was called Wednesday morning in Wailuku District Court.

When Judge Blaine Kobayashi asked Kaeo to give his name, he responded in Hawaiian.

The judge asked three more times for Kaeo to identify himself, with Kaeo responding each time in Hawaiian.

“The court is unable to get a definitive determination for the record that the defendant seated in court is Mr. Samuel Kaeo,” Kobayashi said.

He asked the court bailiff to make three calls for Kaeo before issuing the $750 bench warrant. Proceedings in the case ended for the day.

Kaeo, 51, of Kula was among six protesters arrested in the early-morning hours Aug. 2 as dozens of protesters gathered at Kula Highway and Old Haleakala Highway to confront a large vehicle convoy carrying equipment for construction of the Daniel K. Inouye Solar Telescope at the Haleakala summit.

Kaeo has pleaded not guilty to disorderly conduct, obstructing a highway and refusing to comply with any police officer’s order.

Kaeo had asserted his right to speak the Hawaiian language in court and to have court proceedings translated back to him in Hawaiian.

In making the request, the prosecution noted that Kaeo, an assistant professor at the University of Hawaii Maui College, is fluent in English. The prosecution also said requiring an interpreter in the case “would cause needless delay in the trial process and an unnecessary expense for the judiciary.”

About 120 people, including children, showed up to support Kaeo on Wednesday morning at Hoapili Hale, the state courthouse building. Some packed the courtroom, while others waited in the hallway outside.

“There is a warrant out for me right now. For what? Speaking Hawaiian,” he said. “I thought those days were over. They have this idea we cannot be Hawaiian.

“This whole case is about being Hawaiian. Where is this going to end? I don’t know, but we ain’t going to the back of the bus again.”

In a statement issued Wednesday afternoon, Kamana’opono Crabbe, chief executive officer of the Office of Hawaiian Affairs, said the office “is deeply disturbed and offended” that Kaeo wasn’t allowed to use the Hawaiian language in court and that a bench warrant was issued for his arrest.

“Punishing Native Hawaiians for speaking our native language invokes a disturbing era in Hawaii’s history when Olelo Hawaii was prohibited in schools, a form of cultural suppression that substantially contributed to the near extinction of the Hawaiian language,” the statement said. “It is disappointing that the state government continues to place barriers on Olelo Hawaii, 40 years after Hawai’i’s constitution was amended to recognize the Hawaiian language as an official language of the state.

“We demand that the state Judiciary find an immediate solution to this issue.”

Samuel Kaleikoa Kaeo (center) speaks with supporters gathered in a courthouse hallway after a bench warrant was issued in his case Wednesday. Kaeo was set to go on trial in Wailuku District Court after being arrested last year while trying to block a convoy carrying telescope equipment to the summit of Haleakala. The Maui News / LILA FUJIMOTO photo

Construction on the 2.87-megawatt Kuia Solar project on 12 acres leased from Kamehameha Schools near Lahainaluna High School is nearing completion, according to Maui Electric Co. filings earlier this month with the state Public Utilities Commission. The project is expected to be operational in the first quarter of this year. This photo was taken Jan. 16. The Maui News / MATTHEW THAYER photo