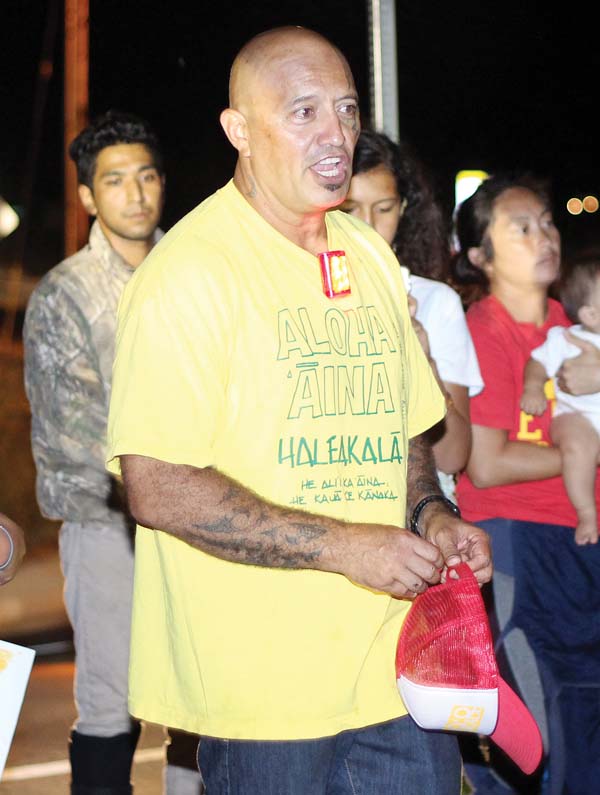 Samuel Kaleikoa Kaeo speaks to a crowd protesting the delivery of large parts for the Daniel K. Inouye Solar Telescope on Aug. 1 near King Kekaulike High School in Pukalani. He said that the message of the protest is “aloha aina” and that they “have nothing to be ashamed of.” When the large trucks arrived early the next morning, Kaeo tried to run under one of the slow-moving vehicles before being restrained and arrested by police. He has pleaded not guilty to disorderly conduct, obstructing a highway and refusing to comply with any police officer’s order. The Maui News / COLLEEN UECHI photo

A bench warrant for a Haleakala telescope protester was recalled Thursday, a day after being issued when he spoke only in the Hawaiian language at a court hearing Wednesday.

Another hearing was scheduled at 10 a.m. Feb. 21 in Wailuku District Court on the use of a Hawaiian language interpreter in Samuel Kaleikoa Kaeo’s case.

“The Judiciary will be reviewing its policies regarding the provision of Hawaiian language interpreters,” according to a statement from the Judiciary released Thursday in Kaeo’s case.

Kaeo, 51, of Kula was among six people arrested in the early-morning hours Aug. 2 when protesters gathered at Kula Highway and Old Haleakala Highway to confront a large vehicle convoy carrying equipment for construction of the Daniel K. Inouye Solar Telescope at the Haleakala summit.

Kaeo has pleaded not guilty to disorderly conduct, obstructing a highway and refusing to comply with any police officer’s order.

His trial had been set to begin Wednesday morning. When the case was called in court and Judge Blaine Kobayashi asked Kaeo to give his name, he responded in Hawaiian.

Kaeo continued to answer in Hawaiian when Kobayashi continued to ask Kaeo to identify himself. The judge said he couldn’t determine that the defendant in court was Kaeo.

A $750 bench warrant was issued for Kaeo before being recalled Thursday morning.

Kaeo has been representing himself after waiving his right to an attorney at a court hearing Sept. 28. He asked for a Hawaiian language interpreter at that hearing and appeared in court Oct. 18 with an interpreter.

Kaeo is an assistant professor at the University of Hawaii Maui College.

A statement released Thursday afternoon by the Native Hawaiian Legal Corp. said it “is more than baffled at the underlying message” in the court’s decision to issue a bench warrant for Kaeo “based upon his failure to appear for his English trial despite his actual physical presence in the courtroom and his willingness and readiness to proceed.”

The statement said the court “essentially ignored” Kaeo’s presence “based solely on his sincere desire to proceed and present his case in Hawaiian.”

“The court’s action yesterday is inexplicable and nonsensical given the Judiciary’s ultimate obligation to ensure the mere appearance of prejudice has no place in this sacred institution,” the statement said. “Ultimately, the refusal to acknowledge Kaeo’s presence to the point of issuing a bench warrant for his failure to appear is nothing short of absurd.”

* Lila Fujimoto can be reached at lfujimoto@maui news.com.