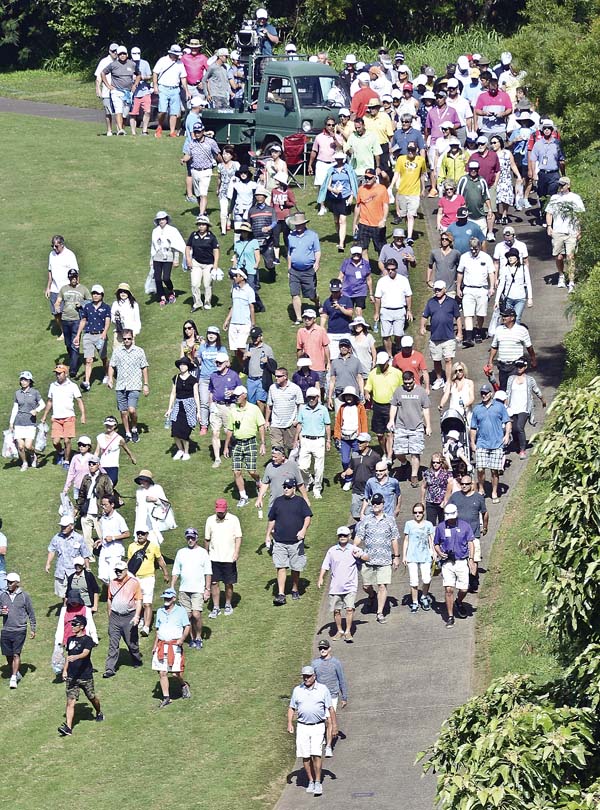 Golf fans walk down the Kapalua Plantation Course’s 15th fairway while following Justin Thomas to his win of the PGA Tournament of Champions in January 2017. The event helped kick off a record year for visitors to the island. -- The Maui News / MATTHEW THAYER photo

For Maui County, 2017 was another record-setting year for tourism with no dark clouds looming on the horizon to dampen the success of the county’s top industry, according to Hawai’i Tourism Authority statistics and visitor industry officials.

Visitor spending hit a record $4.8 billion in 2017, the sixth consecutive record-setting year. The total was 5.2 percent more than 2016. In December alone, visitor expenditures of $483 million were 16.1 percent higher than the previous December.

Xterra athletes hit the water in Kapalua at the start of the sport’s World Championship in October. Such events helped draw record numbers of visitors to Maui County last year, and visitor spending, which has risen since the Great Recession hit the islands in 2008, was forecast to continue rising. -- The Maui News / MATTHEW THAYER photo

Sherry Duong, executive director of the Maui Visitors and Convention Bureau, was bullish on the future of Maui County tourism and pointed to increased air seats to Maui from target markets as a factor in the continued growth of the industry.

Visitor spending, which has been on the rise since the Great Recession rocked the industry in 2008, should continue strong as well, she said.

She also noted that “December has traditionally been a peak month for Maui due to elevated holiday traffic.” This December was particularly hot with hefty hikes in arrivals and expenditures and a 9.1 percent increase in per-person-per-day spending to $215.80 and a 6.5 percent hike in total visitor days.

Arrivals from all of Maui County’s top markets logged steady increases in 2017. Visitors by air from Maui County’s No. 1 market, the West Coast, were up 3.5 percent compared to 2016. Increases also were logged from the East Coast, up 6.5 percent; Canada, up 8.1 percent; and Japan, up 5.9 percent.

The number of visitors staying on Maui island one day or less jumped 8.8 percent in 2017, compared to the previous year.

About half of the visitors to Lanai and Molokai spent one day or less on the island, the data show.

“What tourism generated for Hawaii in 2017, highlighted by record totals in five major categories that convey the industry’s importance to residents and the state’s economy, is rewarding and should not be taken for granted,” said George Szigeti, HTA president and chief executive officer.

“We are hopeful of sustaining tourism’s momentum in 2018 for the benefit of Hawaii’s families and the state’s economy,” he said. “Our message to global travelers continues to be that Hawaii is the safest, cleanest and most welcoming destination in the world.”