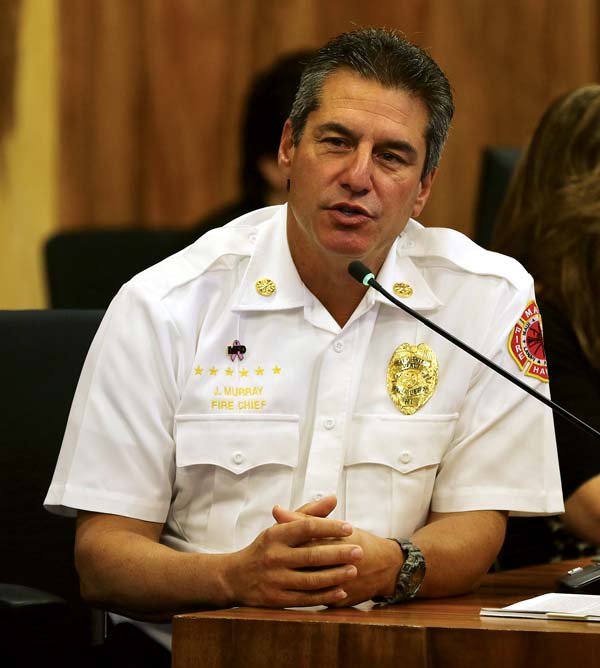 WAILUKU — By scheduling five firefighters per work crew, instead of a minimum of four, Maui County’s Department of Fire and Public Safety is saving approximately $4.5 million annually in overtime pay, according to a recent external audit reviewed Tuesday by council members.

The fifth firefighter keeps the crew at four when one is sick, takes vacation or is otherwise absent, alleviating the need for overtime to maintain the minimum four-member crew, according to the audit by California-based Citygate Associates.

The fifth crew member is used 85 percent of the time to fill a temporarily vacated spot, keeping crews at mandated staffing levels, said Stewart Gary, fire practice principal at Citygate. He also is a former paramedic and firefighter and a department chief.

The audit’s executive summary reported: “While this study makes numerous findings and recommendations, they need to be taken in the context of best practices tune-up for a very good department in a unique operating environment.”

The favorable external audit is strikingly different from the audit done by County Auditor Lance Taguchi. His audit was released in October and recommended the department rein in increasing overtime costs because the department saw a 60 percent, or $1.4 million, increase in overtime pay from fiscal 2014 to 2015.

The county audit suggested a “relief pool” of workers to save $1.9 million to $3.2 million per year in premium pay and overtime. A labor provision that calls for only equally ranked firefighters filling absences, or “Rank-for-Rank Recall,” which usually results in overtime, was to blame for the hefty overtime increase, the audit said.

The rank-for-rank provision took effect July 1, 2014, the first day of fiscal 2015. It had been suspended by the union during the recession and reinstated. It was first placed in the firefighters’ collective bargaining agreements in 2003 and was arbitrated on Oahu in 2009, according to Citygate’s audit.

The recent external audit said the Fire Department’s use of rank-for-rank was consistent with the collective-bargaining agreement and its administrative rules.

The Citygate audit was discussed and then filed by the council’s Budget and Finance Committee on Tuesday. The external audit was commissioned by the committee to examine the department’s performance and fiscal status.

On the other hand, the internal audit last year began by focusing on the county’s payroll. But, during a preliminary review, the Office of the County Auditor found rapidly increasing premium pay/overtime pay in the Fire Department and decided to focus there, the preface of the internal audit said. Its scope did not include examining the department’s overall performance.

Fire Chief Jeff Murray did not address the audit at Tuesday’s meeting, although he sat in the gallery.

After the meeting, he compared the two audits.

“What is really different, these guys are truly experienced,” he told The Maui News. “They know what they are doing. One of the most critical things that you do in any project, when you wake up first thing in the day, you have to listen, you have to listen twice as much than you are thinking and talking,” Murray said of the latest audit. “What (the current auditors) didn’t understand they went and looked.”

“I just think it’s important the community knows that our department has done its best to move forward,” Murray said.

He said he hopes the County Council would take the suggestions in the audit and even suggested a public apology to the department from the council and auditor’s office after coming under criticism with the initial audit last year.

In an email, Taguchi said: “It’s unfortunate that Chief Murray believes that the Council and the Auditor’s Office owes an apology. I stand by my audit report as I am sure the Mainland consultant stands by theirs. However, until the County can get a handle on its $750 million pension and health benefits bills and a housing crisis that forces our friends, family, and neighbors to move to the Mainland or worse, live in their cars at Kanaha, my office will continue to focus on promoting economy, efficiency, and transparency to the taxpayers of Maui County.”

Council Chairman Mike White said in an email: “The most recent fire audit and the one conducted by the County Auditor both affirm the council’s position that the Fire Department must get their fiscal house in order. It is nearly impossible to make long-term policy decisions when financial information is not provided, inaccurate, and not dependable.”

“I have never questioned the professionalism of our firefighters, but decisions at the council must be data-driven. As is usually the case, audits are healthy and timely reviews of departmental performance and council actions. Both audits give important suggestions, and it is my hope we can work to make the necessary improvements” White said.

The most recent audit also notes some inefficiencies. It says the current budgeting and finance charts of line-item account details do not provide sufficient clarity or tracking for understanding highly regulated fire services costs and scheduling and do not help policymakers understand federal- or state-driven costs versus local policy.

It said the department and county budget processes “do not use detailed, accurate and predictable premium pay/overtime forecasting and tracking tools.”

“Lacking this, the budget discussion around all types of premium pays are confusing and, at times, not fully correct,” the audit said. “This leaves the policy decisions for the appropriation of overtime to not be reflective of actual need.”

The audit recommended the department build a detailed predictive premium pay and overtime model that the department and county budget office can use in council budget presentations.

These include ensuring a mechanically reliable front-line and reserve fleet by using a cost-per-mile replacement plan rather than only using age of equipment; the county identifying a long-term funding strategy for the necessary replacement of fire apparatus; and even undertaking an aviation master plan in which fire, police and emergency services could share the use of a larger helicopter.

Citygate said it was impressed with the department’s wide array of services tailored to each area’s different needs.

“The department has been striving to improve certifications, safety, training and adherence to standards,” it said.

To read the full audit, visit mauicounty.us/agendas/, look for the March 27, 10:30 a.m. Meeting and click on the agenda. Then click on the Performance and Fiscal Audit Final Report.