Hokama calls for completing projects already on the books 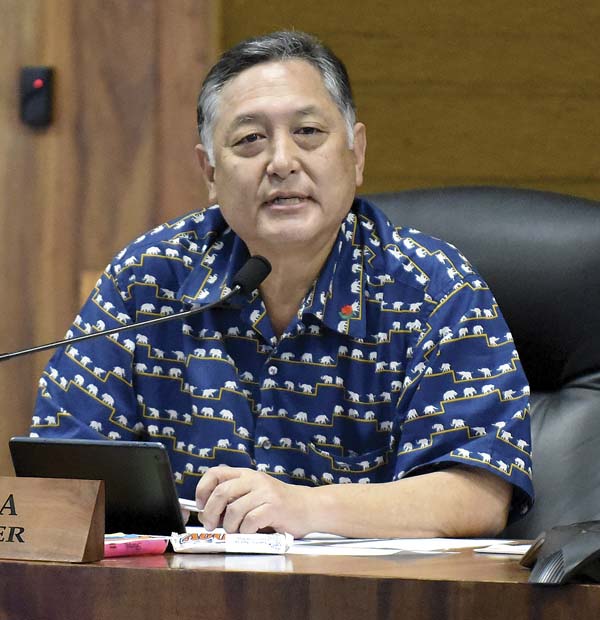 WAILUKU — Maui County Council Budget and Finance Committee Chairman Riki Hokama did not get specific on projects or budget items he would support or object to in Mayor Alan Arakawa’s proposed $820 million fiscal 2019 budget, but he said the council should look into completing projects already on the books, as well as filling current staff vacancies, before creating new jobs and craft a budget allowing for flexibility for a new administration.

Submitted last week, the administration’s spending plan is Arakawa’s last budget proposal. He is completing the fourth year of his second four-year term in office. He cannot seek re-election because of term limits.

“Budget, it’s always a challenging time, your chair always looks forward to this time of the year,” Hokama said in his opening remarks to committee members Thursday in Council Chambers. “But the question for us this morning (is) how do we balance the needs of the community while still maintaining our quality of life within their ability to pay?

“This is a question as policymakers we continue to ask ourselves during these deliberations. Hopefully we find a mutual solution and answers,” Hokama said.

The council has until June 10 to take action on the budget; otherwise, the mayor’s proposed budget becomes law. The budget goes into effect July 1.

The budget would increase county spending by $114.8 million, or 16.3 percent, over the council-adopted fiscal 2018 budget of $705.2 million. The 2019 fiscal operating budget totals $605 million and it has a capital program budget of $214.9 million. With revolving and special funds, transfers between funds within the county and expected grant revenue and other revenue outside the county, the proposed budget’s grand total is $882.6 million.

Among Arakawa’s major proposals is a tiered scheme for property taxes designed to increase income from owners of second homes and investment properties. Both are trends aggravating Maui County’s housing crisis.

It will not affect homeowners.

Responding to questions from committee members Thursday, Budget Director Sandy Baz said that if the tiered system were to pass as is, it would generate $10 million more in revenue, apart from higher property valuations.

Baz said the Honolulu City and County has a tiered system for taxing second homes, although the highest tier increases the property tax by 100 percent on Oahu, versus the proposed 50 percent in Maui County.

Hokama told committee members he would closely follow developments at the state Legislature and would not account yet for measures relating to the Neighbor Island counties’ share of transient accommodations tax revenue.

This week, the state House of Representatives passed a bill in which Maui County’s annual share of the transient accommodations tax would go up by $14.8 million from $23.5 million to $38.3 million. The measure advanced to the state Senate where its fate is uncertain.

Council Chairman Mike White said that, even with the increases proposed, Maui County is still receiving a small share of the transient accommodations taxes that it generates on its own.

Arakawa’s budget calls for some increases to rates and fees. These include increasing the monthly fee for residential refuse collection from $27 to $32 per month on Maui and Molokai and $14 to $16 on Lanai. Rates also increased last year.

Another increase would be hiking the landfill commercial tipping fee from $90 to $97 per ton, and the Arakawa administration wants to boost sewer fees by 3 percent. (Now, the maximum sewer fee for residents is $66.26 per month. With the increase, it would be $68.48.)

The mayor also is proposing to increase the annual motor vehicle registration fee from $17.50 to $20.