Car rental facility moves closer to its May 2019 completion date

New home for airport rental cars on track: Airport DM says the construction job is on budget, on schedule 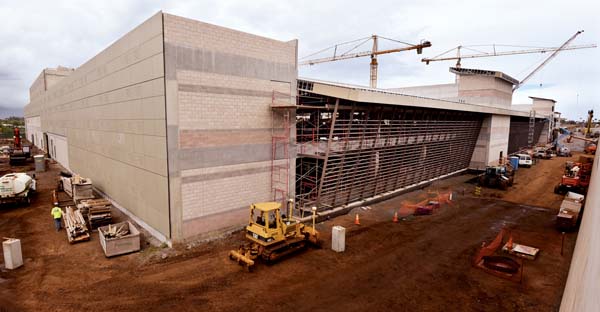 The $340 million consolidated rental car building is beginning to show some finishing touches Friday. The structure should be completed by the end of the year, then car rental companies will have four to six months to prepare their spaces for the projected May 2019 opening. -- The Maui News / MATTHEW THAYER photo

The $340 million consolidated rental car facility at the Kahului Airport with a tram system could be open by May 2019 if the weather holds, said the Maui Airports district manager Thursday.

Marvin Moniz said that the main structure, now surrounded by tall cranes, is on budget and on schedule and is set for completion in December. The car rental agencies then will have four to six months to renovate their areas, putting in offices and counter spaces.

That would put opening of the facility, which will house a dozen companies currently spread out near the airport, in May 2019, he said.

By that time, the tram system that will transport customers between the rental car facility and the terminal will be completed, Moniz said. The first cars are set for delivery in June and work is starting on the track installation.

The solar-powered electric tram will run on one track from the rental car facility with stops at the check-in area and baggage claim. The run back to the rental facility will be nonstop, he said. 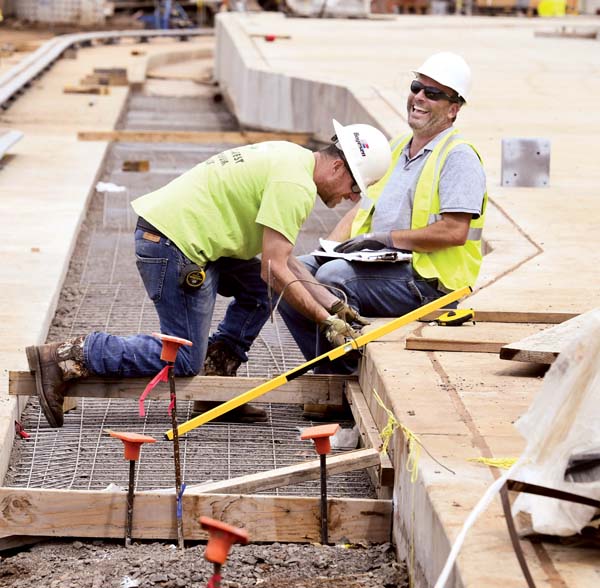 East West Aluminum Craft Hawaii LTD owner John Bordignon (right) shares a laugh with company foreman Lee Glass while looking over their job at Kahului Airport on Friday. The company is set to install more than a mile of aluminum railing for the tramway connecting the airport’s arrivals and departures with the new consolidated rental car facility. The tram will hug the road across from the terminal. -- The Maui News / MATTHEW THAYER photo

The tram will have four individual cars, and during busy periods a second tram could be added with the use of an overtake track, Moniz said. The system will hug the road across from the terminal.

The tram will replace two dozen shuttle buses that carry passengers in an average of 85 trips per hour to rental car companies makai of the airport terminal, the state Transportation Department has said.

When completed, the entire parking lot — including a partitioned area for airport employees — will be available for general parking, he said. Airport employee parking will be at the rental car facility and in a lot near the commuter terminal and air cargo areas, he said. 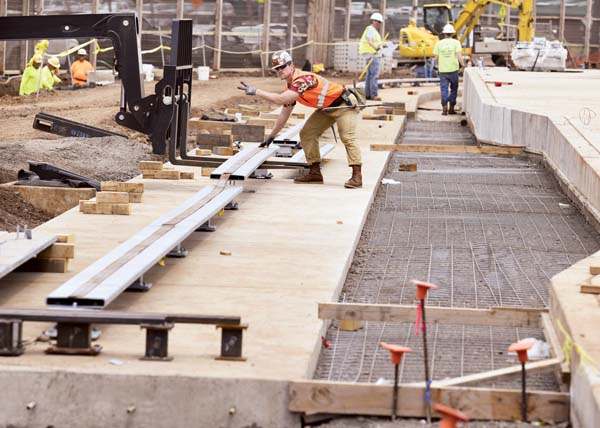 Vernon Brose of Schager Davis Inc. directs where he wants sections of guideway placed while working on the new tramway for Kahului Airport on Friday afternoon. Brose said the tram’s rubber wheels will roll between the guides. The solar-powered tram will take rental car customers to and from the terminal. -- The Maui News / MATTHEW THAYER photo

The Transportation Department noted that no taxpayer funds are being used for the project. The entire $340 million is being funded by the Customer Facility Charge, which consists of a daily charge of $4.50 to those who rent a car.