Community gets a glimpse of long-delayed Kihei high school

New Kihei High School concepts revealed: Parents plead for school to welcome all grades at once at scheduled 2021 opening 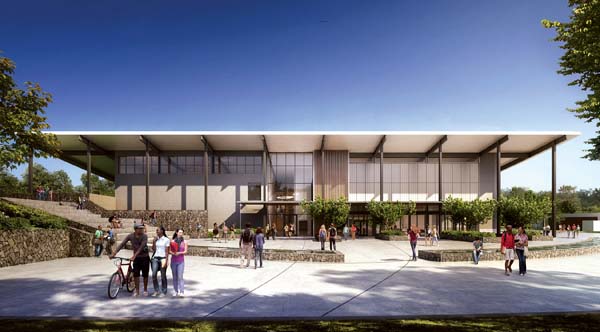 The library/cafeteria building of the Kihei high school is planned for the upper campus. It would be built in the campus’s second phase of construction, following an initial phase of infrastructure development with grading, roads and laying of pipes. Inside, students would have a raised stage area and cafeteria seating. -- G70 rendering

KIHEI — State Department of Education officials confirmed during a meeting Thursday night that the Kihei high school is on track to open for the 2021-22 school year, but they left some long-suffering parents pleading for it to open with all grade levels at the start.

“I’m super excited we’re at this point — don’t get me wrong,” Kihei resident Halleh Dunnicliffe said during the meeting at Kihei Elementary School. “But let’s start with a full school. Let’s start with all grade levels.”

Nearly 50 residents and parents voiced their concerns to state officials over the opening of the school, its name, construction timeline and funding. The school had once been targeting a 2014 opening, which was pushed back to 2016 and then 2020.

Lead architect Charles Kaneshiro, president of architectural design and engineering firm G70, provided a presentation on the latest plans for the school located on 77 acres mauka of the intersection of Piilani Highway and Kulanihakoi Street.

The campus is divided into three tiers: athletic fields on the lower campus, gymnasium on the middle and academic buildings on the upper campus. Plans call for it to be built in phases, which began with its pre-phase of digging two potable water wells in 2016 — becoming the first Hawaii public school to dig its own wells, Kaneshiro said. 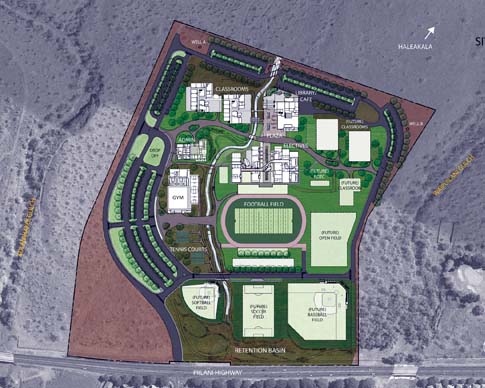 A diagram shows the site plan for the Kihei high school project at full build-out. Plans call for the school to be built in phases in three tiers — athletic fields on the lower campus, gymnasium on the middle and academic buildings on the upper campus. -- G70 graphic

The first phase consists of the infrastructure, which includes all the pipes, roads and grading. Designs have been completed, and Goodfellow Bros. expects to begin work in the summer. The first phase is expected to take about a year and half to complete.

For phase two, legislators have secured $101 million in funding, which is enough to build at least one classroom structure, an administration building, a conjoined library and cafeteria, a physical education room, two parking lots, a clay court and temporary play field. State officials are nearly done with the second-phase design and plan to go out to bid between May and June, followed by permitting.

“We’re strategically putting this out where it allows us as much flexibility to build as much as we can,” he said.

The third phase includes a gymnasium and other rooms for electives such as music, industrial arts, visual arts and digital arts. It also has outdoor basketball courts, tennis courts, and a track and field. 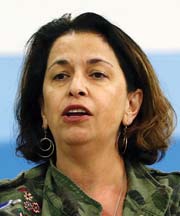 Future phases call for building two more classroom structures; an open play field; baseball, soccer and softball fields; and bleachers. Funding has not yet been secured for the third and future phases.

The future school also was designed to be “net zero energy,” meaning it uses as much energy as it produces, which makes it arguably the most sustainably designed campus in the state, Kaneshiro said. He worked with one of the leaders in environmental energy modeling companies in the world to design the school to be as cool as possible and not need to rely on air conditioning.

He noted that classrooms, the cafeteria and other buildings will have air conditioning. Other features include a stormwater retention system that prevents the school from flooding by using a large retention basin at the bottom of the highway.

Parents expressed excitement with the plans, but they wondered whether their children would be able to attend the school by the time it opens.

Nick Nichols, DOE facilities planner, said the “definitive thought” is to open with 9th and 10th grades or possibly just the 9th grade. One of the reasons to do so is that juniors and seniors at other schools tend to stay where they are rather than transfer. 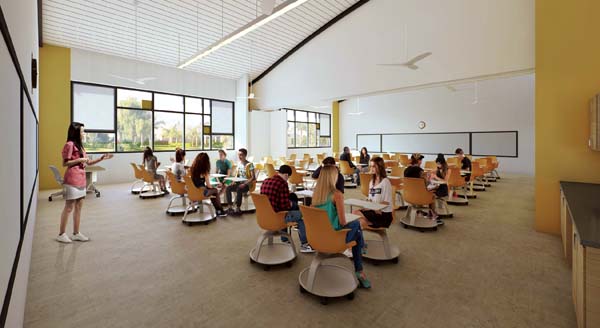 A rendering displays a classroom with student desks, overhead fans and lighting from windows. -- G70 rendering

Dunnicliffe, who has a child in 7th grade at Lokelani Intermediate School and one who has already graduated from college, asked state officials to give their children the choice. She explained how many parents have been pushing the state over the years to open the South Maui high school, while being forced to send their kids elsewhere.

“My choice is to have my son go to the high school in the town he was born and raised in,” Dunnicliffe said. “Believe me, we have been so patient. We have had so many rallies and so many community meetings, and we’re begging you guys. This is great the DOE is having this meeting and we’re beyond ecstatic, but we’re begging you guys to start all grade levels. It’s not fair that we’ve been waiting this long.”

Some residents wondered whether officials could hit the projected fall 2021 opening date and asked if the state is ready to proceed with grading work.

Former South Maui County Council Member Don Couch, who serves as an executive assistant to Mayor Alan Arakawa, said after Thursday’s meeting that the project has been delayed five months due to an issue over the school’s water meter. He said the state Department of Transportation was unwilling to allow the digging of a trench to lay the pipe across Piilani Highway for the school project.

The county Department of Water Supply provided the state its comments on the issue in October, but it received a “fairly well-engineered answer” Thursday, he said. 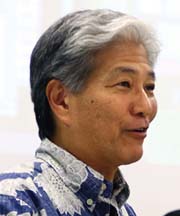 “Everything else has been going smoothly,” Couch said. “We’ve cut out that sticking point and let them proceed with everything else. They’ve said they’re going to come and work with us and figure out how they can get a meter where we’re OK and they’re OK.

“It’s trying to get everybody on the same page, and everybody wants to be.”

Officials at the meeting also reassured parents that the project is on track to begin grading this summer and hit its opening date.

“I think it’s totally reasonable for a professional contractor to build this in 18 months,” Kaneshiro responded. “Although the design is quite unique and many firsts for the DOE, the construction methodology and techniques we’re using are standard and straightforward.

“This has already gone faster than some of my other projects, I’ll tell you that.”

Parents also expressed concerns about what electives and sports would be available to the first few classes of students. Department officials said it will be up to the principal, teachers and students of the school to decide how they will use campus buildings and school offerings.

Maui High School Principal Jamie Yap said Friday that he is unsure how many students from Kihei would go to the school considering the limited programs and facilities it will have when it opens. The Kahului school is counting on the South Maui campus to relieve its enrollment, which has surpassed 2,000 students and expects 640 freshmen in the fall.

In January, Maui High was forced to cut its day care and teen parents program for the coming school year to use the space as classrooms.

“If I have 600 freshmen coming in, let’s say a fourth or third of that is from Kihei, that’s a small impact on my school overall,” Yap said. “Over time, there will be, but not immediately.

“We’re bursting at seams right now, and we’re not getting any relief anytime soon.”

A final point parents asked the department was if funding might lapse due to delays. In 2011, nearly $20 million in funding had been allowed to lapse after the state Legislature had made multiple appropriations to the project for design, land acquisition and permits dating back to 2004.

Department officials said they plan to open the bid for construction of the school before June, thus securing the funding.

Kihei resident James Alger asked department officials if they could release their presentation and plans to the public so they can keep the state accountable and follow it more closely. He said he is regularly asked about whether the high school is going to open.

“Is it happening? That’s what they’re asking for,” Alger said. “Not hearsay from me. Get it out to the public because they don’t want to hear me anymore. I’ve been saying, ‘Yeah we’re getting a high school,’ for the last 10 years.”

The library/cafeteria building of the Kihei high school is planned for the upper campus. It would be built in the campus’s second phase of construction, following an initial phase of infrastructure development with grading, roads and laying of pipes. Inside, students would have a raised stage area and cafeteria seating. — G70 rendering

A diagram shows the site plan for the Kihei high school project at full build-out. Plans call for the school to be built in phases in three tiers — athletic fields on the lower campus, gymnasium on the middle and academic buildings on the upper campus. — G70 graphic

A rendering displays a classroom with student desks, overhead fans and lighting from windows. — G70 rendering

Maui County Council Chairman Mike White presides over a council meeting Friday. On first reading, council members approved a bill to require at least five years of property ownership before an application would be permitted for a short-term rental. The measure requires passage on second reading. — The Maui News / MATTHEW THAYER photo