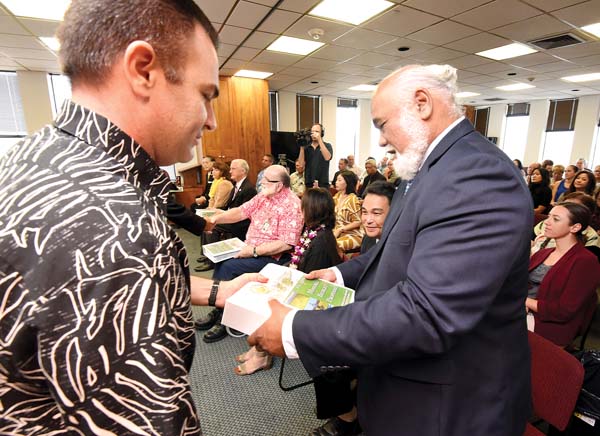 Arakawa’s proposed budget would increase county spending by $114.8 million, or 16.3 percent, over the council-adopted fiscal 2018 budget of $705.2 million. The 2019 fiscal operating budget totals $605 million and a capital program budget of $214.9 million. With revolving and special funds, transfers between funds within the county and expected grant revenue and other revenue outside the county, the total budget is $882.6 million.

“There are two words that come to mind when looking at this, our 12th budget proposal for the community. Those words are: planning and investment,” said Arakawa, who is in the last year of his current four-year term as mayor. (He also served two other four-year terms as mayor.) “Without planning, we could not get the best return on the community’s investment. Without investment, there is no mechanism to bring these plans into fruition.”

“To be an effective government, we need to do both. This budget reflects this theme and is our most aggressive budget proposal to date,” he said while officially presenting his budget to council members in his ninth-floor conference room with members of his Cabinet and county employees in attendance.

The council’s Budget and Finance Committee will begin reviewing the proposal Tuesday in Council Chambers on the eighth floor of the Kalana O Maui Building. The full council has until June 10 to take action on the budget; otherwise, the mayor’s proposed budget becomes law. The budget goes into effect July 1. 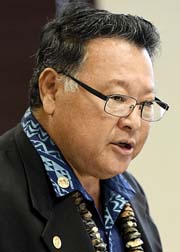 Instead of tinkering with property tax rates this year, Arakawa is seeking to change to a tiered rate structure in four property classifications: residential, apartment, agricultural and conservation. Homeowner and other classifications would remain the same. (See accompanying story.)

Arakawa is not seeking property tax increases, although generally higher property valuations with the same rate would mean many taxpayers would pay more.

Meanwhile, the administration is seeking some fee increases. For example, the landfill commercial tipping fee is proposed to rise from $90 to $97 per ton; and the cost for residential refuse collection would increase from $27 to $32 per month. County officials have long said that the current charges do not raise enough revenue to cover such solid waste costs.

Another proposed increase is a 3 percent hike to sewer fees. The maximum sewer fees for residents is $66.26 per month. With the increase, it would be $68.48. The additional money is needed to properly operate and maintain the county’s wastewater system, according to the administration’s budget proposal. 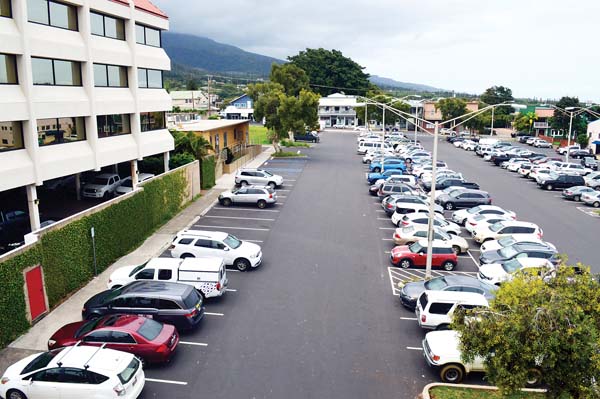 Motorists park Friday afternoon in the Wailuku municipal parking lot. Mayor Alan Arakawa is proposing the county budget $81.2 million to develop a civic complex that would include a parking structure and a three-story multiuse building. Under the development plan, the county would purchase the One Medical Plaza (middle left) and demolish it to make way for the project. -- The Maui News / BRIAN PERRY photo

Another proposed increase is to the motor vehicle registration fee, from $17.50 to $20 per year. That would cover the higher costs of processing the registrations and is not tied to the vehicle weight tax, said Budget Director Sandy Baz.

A proposal that generated some murmurs and “ahs” in the audience during Arakawa’s presentation was announcement of $2.7 million for the Fire & Public Safety Department to pay for four ocean safety officers and equipment to operate a lifeguard station at Puu Kekaa, or Black Rock, in Kaanapali. The popular snorkeling area has seen the most drowning deaths on Maui in the past years, and it is not staffed with a lifeguard station.

Resorts are donating land and the lifeguard tower to help pay for the new station, Arakawa said.

“While this is not a county beach park, this is the area where the most drownings on our island are taking place, and this public-private partnership will help educate and protect beachgoers, as well as save many lives,” he added.

At a West Maui meeting in December, residents rejected an idea by now-retired Fire Battalion Chief of Ocean Safety Colin Yamamoto to move a lifeguard tower from Hanakaoo, or Canoe Beach Park, to the vicinity of Puu Kekaa. Residents want the state and Kaanapali resorts to fund the tower.

Black Rock is the second deadliest area for drownings in the state with 22 over the past decade and 18 since 2011, Yamamoto reported. (Hanauma Bay on Oahu is first with 23.) More than 80 percent of the Black Rock victims were tourists. From 2007 to 2016, 156 of the 169 snorkel drownings statewide were tourists. Maui County averages 12 to 25 drownings per year with 72 percent being visitors.

The largest capital improvement project in the proposed budget is $81.2 million for the construction of the Wailuku civic complex, which Arakawa said has undergone community planning for more than a decade.

“The hub will be the cornerstone of the redevelopment and revitalization of Wailuku town for generations to come,” he said.

Plans include a multilevel parking structure to replace the Wailuku municipal parking lot, where the complex is planned. There will be county office space, community space and a specialty market. It is currently in the design and development phase. It will include a three-story multiuse building at the corner of Vineyard and Church streets.

The project includes reconstruction of Vineyard Street from High to Market streets, with infrastructure such as storm drains, sewers, sidewalks, street lighting and underground utilities. The same would be done for Church Street.

Also in the budget is $367,000 to increase the number of patrol officers in Maui’s Central District, which includes Wailuku, Kahului, Haiku and Upcountry.

“We cannot with all the expansion of the population in the central area . . . continue to see them with so few police officers,” Arakawa said.

Currently, there are 11 assigned patrol officers in Central Maui during any given time. Of those, three are dedicated to Wailuku; three to Kahului and five to Upcountry, police said. The staff levels have remained the same for at least 30 years.

Arakawa is calling for appropriating $9 million to the Department of Housing and Human Concerns to acquire property to expand homeless shelters and affordable housing countywide.

The department will try to re-establish the first-time homebuyer’s assistance program, he said.

Also in the proposed budget is $745,000 for the Transportation Department to buy replacement Maui Buses and Maui Economic Opportunity shuttles. It includes a grant to MEO for a new maintenance facility.

* Melissa Tanji can be reached at mtanji@mauinews.com. Staff Writer Lila Fujimoto contributed to this report.

Chey Higashiguchi of Maui High hits against Kamehameha Maui’s Ethan James and Iverson Dudoit in the second set of the Warriors’ three-set victory over the Sabers on Friday night. — The Maui News / CHRIS SUGIDONO photo

Mileina Sniffen gets ready for a ball dug by Amy Russell on Thursday. — SCOTTIE ZUCCO photo

Motorists park Friday afternoon in the Wailuku municipal parking lot. Mayor Alan Arakawa is proposing the county budget $81.2 million to develop a civic complex that would include a parking structure and a three-story multiuse building. Under the development plan, the county would purchase the One Medical Plaza (middle left) and demolish it to make way for the project. — The Maui News / BRIAN PERRY photo