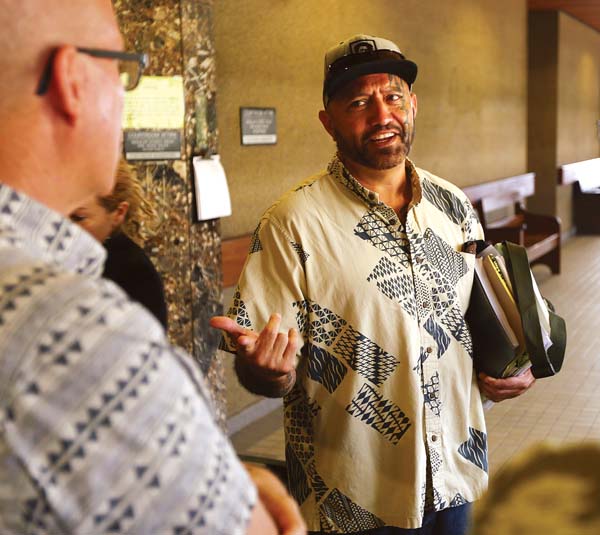 WAILUKU — A Haleakala telescope protester who asserted his right to speak in the Hawaiian language in court earlier this year was granted an interpreter Wednesday in Wailuku District Court.

A trial date was set for May 23 for Samuel Kaleikoa Kaeo, 51, of Kula, who spoke only in Hawaiian during his appearance.

“I’m happy that the judiciary is turning the corner and realizing that this issue isn’t going to go away,” Kaeo said outside the courtroom alongside a handful of supporters. “In fact, this issue is going to grow.”

Kaeo is among six protesters arrested in the early-morning hours Aug. 2 as dozens of protesters gathered at Kula Highway and Old Haleakala Highway to confront a large vehicle convoy carrying equipment for construction of the Daniel K. Inouye Solar Telescope at the Haleakala summit.

He has pleaded not guilty to disorderly conduct, obstructing a highway and refusing to comply with a police officer’s order.

A $750 bench warrant had initially been issued to Kaeo after Judge Blaine Kobayashi asked him four times to give his name in English during a court hearing in January. Judge Kobayashi had already granted a request from the prosecution to have Kaeo’s trial conducted in English.

A day later, the warrant was recalled and the state Judiciary changed its policy for Hawaiian interpreters. The state agreed to provide or permit qualified interpreters “to the extent reasonably possible.”

Kaeo’s case was reassigned to Judge Douglas Sameshima, who ordered an interpreter for the trial. Kaeo, however, objected to the new date and asked that his case be dismissed because more than six months has passed since his arrest.

“I’m asking the judiciary to recognize my civil rights,” he said through an interpreter.

Sameshima told Kaeo, who is representing himself, that he must file a motion to the court. After Wednesday’s hearing, Kaeo blamed the prosecution for pushing his trial back due to its motion to have the trial in English.

Maui County Prosecutor J.D. Kim could not be reached immediately Wednesday for comment.

“I really don’t understand why the trial is being pushed back so far into the beginning of summer, which would make it by then nine months from when I was arrested,” Kaeo said. “The judge did say I could submit a motion to challenge that so I think for my rights as a defendant I need to explore all possibilities.”

Kaeo said the Judiciary’s policy is still a little unclear and demanded it ensures there is a well-trained supply of Hawaiian translators. He said the number of native speakers is increasing, and the politics of Native Hawaiian rights are becoming central in many court cases.

“This is not a new standard,” he said. “This is returning to what was once the central language of the court system. The rights of our people to use Hawaiian is not just codified in the state constitution, but we have argued that under the human rights law that we have a right in Hawaii to defend ourselves through Hawaiian. It’s the responsibility of the court system to provide that and guarantee we have the best ability to defend ourselves.”

* This article includes a correction from the original published on Thursday, March 22, 2018. Second Circuit Court Judge Douglas Sameshima presided in a hearing Wednesday in which he ordered that Haleakala telescope protester Samuel Kaeo be granted a Hawaiian language interpreter. An incorrect judge was identified in the story. The Maui News apologizes for the error.