Bypass opening offers some bumps in the road 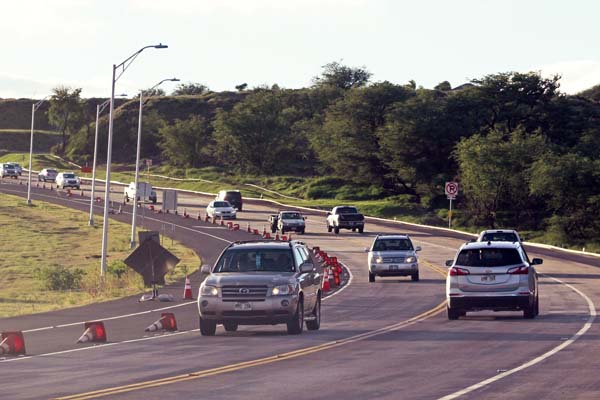 The newly opened section of the Lahaina bypass created an early morning traffic jam, doubled the work commutes for many residents and even confused some navigational apps on its first day open to the public Monday.

“Everybody was late (to work) today, so if the mail’s late, don’t blame me,” said Lahaina postal worker Michael Essner, whose 35-minute commute from Wailuku turned into an hour and a half.

Meanwhile, drivers headed south away from Lahaina on the bypass saw little change, though cars on Honoapiilani Highway were redirected onto the bypass at Kai Hele Ku Street.

“We knew there would be no change going south,” said Bob Pure, the former president of Lahaina Bypass Now, an organization that advocated for the building of the bypass to ease congestion in Lahaina town. “In other words, south was going to be easier, but going north all the cars are being forced onto the bypass, and there’s just a lot of stuff going on there. I think there’s a lot of work to be done.” 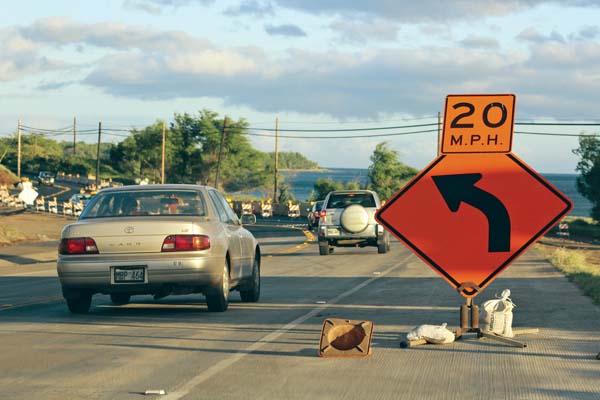 A sign cautions southbound motorists to drive slowly on the curve leading from the Lahaina bypass to Honoapiilani Highway. The Maui News / COLLEEN UECHI photo

The traffic tie-up was partially due to the closure of a three-quarter mile stretch of Honoapiilani Highway south of Kai Hele Ku Street. The department expects that portion of the highway to be closed until mid-May while it completes the southern connector road from the bypass to the highway.

The closure created some confusion for navigational apps like Google Maps, which depicted the highway as closed and directed people through Kahakuloa to get to Lahaina, said Lisa Paulson, executive director of the Maui Hotel and Lodging Association.

Paulson said it’s “a software issue” and has reached out to Google as well as rental car companies, Maui police, the county and hotel properties to make sure guests and staff are aware.

“It’s for the safety of everybody because as you know, going the back way it’s a one-lane road in many areas and no guardrail,” Paulson said. “The people that are just landing are going to be very confused. They’re going to assume that is the correct way to go.”

At 8:30 p.m. Monday, Google Maps still was showing the 1 hour, 45 minute route through Kahakuloa as the primary route from Kahului Airport to Kaanapali. 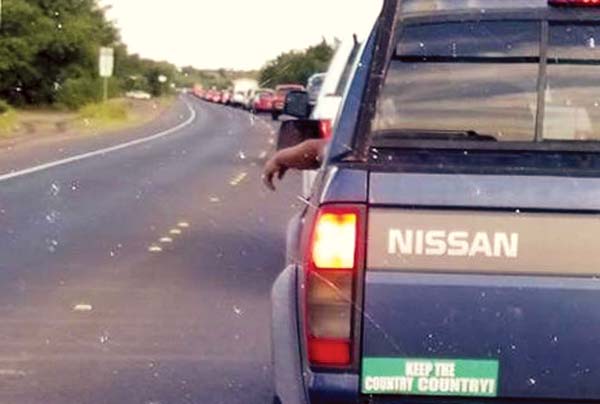 Traffic snakes along Honoapiilani Highway on the way to West Maui early Monday morning. Wailuku resident Michael Essner said traffic was backed up to Mile Marker 14, turning his 35-minute commute into an hour and a half. MICHAEL ESSNER photo

Residents, meanwhile, tried to get an early start but ran into traffic. Essner started his drive at 6:15 a.m. like he does every morning. He said traffic was stop-and-go from Mile Marker 14 to the start of the new bypass, though traffic flowed more smoothly once on the bypass. He arrived at work at 7:45 a.m., 45 minutes late.

“My boss already knew what was going on, so it was all right,” Essner said. He estimated that about 70 percent of the post office employees have to commute to Lahaina.

Essner said drivers exiting the bypass still were stopping at Keawe Street before turning right onto Honoapiilani Highway. This is one of the alterations made by the state Transportation Department to accommodate the increased traffic at the intersection; it is now a free right turn, meaning drivers can turn at any time unless there are pedestrians, according to the department. Essner said he thinks traffic will flow better once people get used to the turn.

When asked whether he thought the traffic was caused by the confusion over the new route or poor design, Essner said “both.”

“I favor more on the poor design part of it,” he said of the two-lane bypass. “We don’t need one more lane in and out. We need multiple lanes going in and out to handle the amount of visitors and residents using that corridor.”

“I always leave at 5:45 so I can beat the regular traffic, but that wasn’t early enough this morning,” Elizares told The Maui News via Instagram.

He also questioned the department’s decision to open the bypass on a Monday morning.

“It wasn’t ready,” Elizares said. “Definitely not the day to try and force the opening of the road. Maybe do a soft opening on a low-traffic day like Sunday.”

Pure and his wife, Diane, had a more pleasant commute Monday morning. They got on the bypass at about 9 a.m. and traveled from Keawe Street to Olowalu in nine minutes.

“That’s the good news,” he said. “The bad news is once we’re on the pali, I noticed that the cars going north were backed up pretty good from most of the pali up to Maalaea.”

Diane Pure said she thought part of the delay was caused by confusion and the construction work still going on around the southern terminus. She said there was “a lot of striping and equipment” still at the site Monday morning. The couple drove back to the west side around 1 p.m. and said the bypass “was clear sailing” by that point.

Bob Pure was optimistic about the new bypass section.

“Hopefully, the motorists will not believe it’s going to be that way forever,” he said of the first day of traffic.

Southbound traffic on the $38.7 million bypass was moving smoothly when Lahaina resident Tamara Paltin drove it around 1:30 p.m.

“It’s pretty nice overall,” she said. “It’s just (during) the high volume times of day, are they going to be better than the regular Highway 30 or is it going to be the same? I know there’s a lot of concern. Why is it just two lanes of traffic with traffic lights in the same place? You’re taking the existing problems and shifting it to a different location.”

Paltin also wondered “what’s the rush” to open if the road wasn’t quite ready to debut.

In the mind of West Maui Rep. Angus, McKelvey, the traffic was “a self-fulfilling prophecy” after all the complaints that he and West Maui residents raised during the buildup to the bypass opening. McKelvey boycotted the blessing of the bypass on April 15, saying that the state has continued to move forward without listening to the community.

“That’s why this blessing was in my mind kind of ridiculous, because this thing was totally half-done, half-baked,” McKelvey said Monday.

McKelvey said the bypass was supposed to be “an alternative to the existing coastal road.”

Council Member Elle Cochran, who holds the West Maui residency seat, said in an email that she was “extremely disappointed in the initial flow of traffic today (or lack thereof).”

“I realize this is the first day, and expect the state has taken notice and is working immediately to mitigate the impacts that West Maui motorists are experiencing,” Cochran said.

Cochran also said the bypass is “flawed by design to merge the brunt of northbound traffic onto Keawe Street where business and residential traffic merge with commuter traffic.” It’s why McKelvey believes it’s now “more critical than ever” that the state move forward with the northern connector of the bypass to Kaanapali.

The department said in a news release Monday that some utility work is creating delays at the southern terminus and estimated it would be completed in a week and a half. The department plans to monitor traffic conditions over the next three weeks and said it “believes conditions will improve when utility work is completed and motorists get used to the adjusted traffic patterns.”

Average travel times from the southern terminus to Keawe Street were 12 to 14 minutes in the northbound direction and eight to nine minutes southbound, according to the department.

For Essner, there was one perk to the new bypass.

“I just got done delivering the mail on Front Street, which is usually a horrific mess because of all the traffic,” he said. “Today, it was nice.”

A sign cautions southbound motorists to drive slowly on the curve leading from the Lahaina bypass to Honoapiilani Highway. The Maui News / COLLEEN UECHI photo

Bob and Mike Bryan pose with their trophy after winning the Miami Open earlier this month. Ron Angle photo

Maui High School’s Jon Aunese tries to hit over Lahainaluna’s Tekoa Sonognini in the first set of the Sabers’ five-set win over the Lunas in an MIL Division I tournament semifinal Monday at King Kekaulike. The Maui News / CHRIS SUGIDONO photos

Traffic snakes along Honoapiilani Highway on the way to West Maui early Monday morning. Wailuku resident Michael Essner said traffic was backed up to Mile Marker 14, turning his 35-minute commute into an hour and a half. MICHAEL ESSNER photo