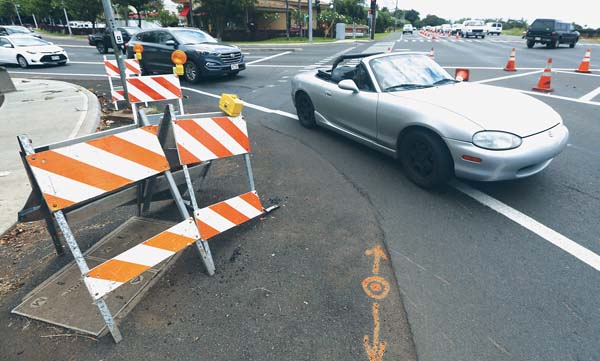 Motorists turn right Tuesday afternoon from Keawe Street onto Honoapiilani Highway. Countless drivers were seen stopping before the highway, despite the lane being a free right turn, which contributed to delays on the street Monday. The Maui News / CHRIS SUGIDONO photos

During the morning and afternoon rush hours on Monday, cars frequently blocked both Keawe Street entrances of the center and prevented access for workers and visitors. Tuesday’s traffic flow appeared to be better, but workers said they still faced some periods of traffic backups.

“As anticipated, people cannot get in or out of this intersection,” said Dan Blessing, owner of Island Cream Co. “The biggest problem is that, in all honesty, people are breaking the law. You’re not supposed to block the intersection, and that’s what they’re doing, as we knew they would.”

Congestion was exacerbated by drivers stopping at the bottom of the street before turning right onto Honoapiilani Highway — even though it is a free right turn. Countless motorists continued to stop before entering the highway Tuesday afternoon.

“They’ve got to do something,” Blessing said. “At a minimum put up signs. It seems like common sense.”

Drivers try to turn left into the Lahaina Gateway Center off Keawe Street, while cars wait to turn left onto Honoapiilani Highway. Store owners and managers said Tuesday that the center’s two entrances were blocked by heavy traffic during Monday’s opening of the latest bypass section, which starts at “cut mountain” near Olowalu.

Guy Harshman, manager of OfficeMax, said his supervisor had to leave 20 to 30 minutes earlier due to the opening of the new stretch of the bypass to come to work from Central Maui — allotting an hour and a half for the trip. Harshman said he has seen traffic back up on the bypass from Keawe Street to Lahainaluna Road.

“It was bad before the bypass, but it got three times worse,” Harshman said.

State Deputy Director for Highways Ed Sniffen said in a phone interview that the state would be putting up a lighted message board or sign to tell drivers that they do not need to stop. He added that the state also may install a delineator to indicate that the right lane is separated from traffic on the highway.

“I think once the public sees there’s a physical separation, it’ll be easier,” Sniffen said.

Despite the confusion, Sniffen said delays took no longer than eight to nine minutes along the bypass Tuesday. He said crews drove through various points throughout the day to monitor traffic patterns and made adjustments based on Monday’s flow.

“Even with people stopping at the right turn, we didn’t see any major backup on Keawe Street.” Sniffen said.

Blessing and other businesses along Keawe Street disagreed and emailed state and county officials seeking immediate relief from the traffic. Blessing said five or six cars were backed up waiting about seven minutes to leave the parking lot.

“I think they need to mark the intersection,” he said. “The entrance to the shopping center has no markings, no crosswalk, no nothing. As the intersection becomes more visible, I think people will be more cognizant that it is an intersection. Right now, they come off this hill, and it’s a mess.”

Harshman was concerned that customers may stop coming because of the heavy traffic and difficulty entering and exiting the parking lot. He said many tourists block the intersection and refuse to let anyone onto the street.

“Basically, you’re stuck until a local person lets you in,” he said.

County Department of Public Works Director David Goode said he was made aware of the issue Tuesday morning and had traffic engineers “check it out right away.” He said he would be working with the state on how to resolve the issue, which may be a “combination of striping and signage.”

“This will be part of the adjustments we make as we go on and with the state making adjustments on the bypass,” Goode said. “We’ve committed to get them completed as quickly as they show up, and this one we have to check out a little, but we’ll get something done.”

Lahaina Police Capt. David Silva said he has not received any calls about the blocked intersection, but he has personally seen it happen. He advised all drivers to “proceed with caution and know that they cannot block the roadway.”

“We’re going to have accidents because eventually people are going to try to push their way out,” Silva said.

The road is expected to be completed in two weeks, Sniffen said.

Silva said Kai Hele Ku Street only has one lane going mauka without a turn lane so drivers going straight must stop at a red light, which prevents those trying to turn right onto the bypass. He said traffic on the street was backed up to the “Guardrails” surf spot.

Sniffen said crews installed a lighted message board notifying drivers that they can take Hokiokio Place to the bypass due to the increased traffic at Kai Hele Ku Street.

“We contacted them and saw they adjusted it this morning,” he said. “I don’t think we ever anticipated it would think that the road was closed.”

Sniffen said crews will continue to monitor traffic and make adjustments over the next couple weeks. He thanked members of the public for their patience and credited his workers for making timely changes.

“I’m very happy with the adjustments that were made, and we’re looking at the bypass as definitely reducing (the public’s) commute times in the area,” he said. “The biggest thing for me is this project is a big success for the community, and we absolutely look forward to adding to this. Whether we go north or south will be based on funding availability.”

Blessing, who is in his fourth year running his business at the center, said he understands it is only the second day of the bypass section opening and is being patient with the county and state. He warned, however, that he may have a “more heated response in about two or three weeks.”

“I’m trying to be professional and courteous, but a lot of these things were no-brainers,” he said. “It’s really a challenge for the engineers involved when the citizens know more about it than they do. Now everybody is paying the price.”